footnotes moved to the end

★ Start a Discussion about this document
Skripal Case Italy

Reactions to Skripal case have followed a well-known pattern in the age of internet and social media. The first reactions of many Italian social media users were not based on analysis or reflections but mostly on the ideological positions assumed before the 4th March poisoning. Therefore, are not surprising the skeptical reactions of many users towards the linkage of the Salisbury attack and Moscow.

Moreover, to place the Italian reactions on the Skripal case in the right context, it is necessary to recall that only one over three Italian citizens considers Russia as a major threat1, one of the lowest rate in Europe. In addition, various groups – often in network – spread pro-Russia information daily. As a consequence, many Italians are dependent of a certain mental map, and react accordingly.

The evolution of some key Italian traditional media is even more interesting. In fact, misinformation and more generically, doubts on the UK official version on the Skripal attack have been disseminated also by important traditional medias such as “Il Sole 24 Ore” or “RAI”, the public radio-television network.

Finally, relevant political figures expressed doubts concerning the Russian guiltiness and on the reactions of the Transatlantic countries.

Therefore, the present analysis will outline the influences on the Skripal Case coming from both the information and political field which could be useful to provide a clearer picture on the Italian reactions on Skripal case as well as on the possible future trends.

The pro-Russian network of accounts and websites started to spread disinformation immediately after the attack. Some well-known outlets like PandoraTV2, Sputnik Italia, RT, l’Antidiplomatico3 have been very active in spreading counter-narratives on the March attach. Moreover, some journalists did the same. For instance, Fulvio Scaglione and Marcello Foa, two well-known pro-Russian journalists, have written some articles about the attack, indicating the Skripal case as a “fake news”4,5. Both published their articles on recognized and mainstream media, Linkiesta and Il Giornale.

Foa’s case is particularly relevant, as the new Italian Government has decided to appoint him as the new president of RAI. Foa has often expressed pro-Russian views and circulated pro-Moscow news, and even fake news, by articles and social networks. As President of the Italian national public network of information it will be important to understand how his personal views will influence the direction and the fairness of the most followed tv news service.

Libero Quotidiano, a national newspaper who often adopt a pro-Russian line, published an article written by Gianluca Savoini10, President of Lombardia-Russia Association11, on the subject: “The Skripal Case is a Fake News but the United Kingdom do not reply to Russia” (see the annex, image 1).

Reactions to Skripal case have outlined an Italian peculiarity: trolls are basically unnecessary because public opinion and many political figures already have a pro-Russian attitude. key example is Matteo Salvini, who declared that if he had been at the government he would not have expelled Russian diplomats 13. If, on one hand, he confirmed that Italy must remain without any doubt in the Western alliances, on the other hand he reaffirmed to be against the “isolation of Russia” and the NATO maneuvers and exercises in Eastern Europe14. Furthermore, Sputnik Italia reported that Salvini would have said that, basically, there is no evidence to consider Russia guilty on the Skripal Case and that too many fake news about Russian hackers and trolls have been spread on the internet15 . Thus, implying that also the UK and Allied version on the Skripal Case could be listed as a fake news.

Several minor anti-Western, pro-Russian websites shared those words, but none of the mainstream media did the same, raising doubt on the reliability of Sputnik’s quote. At the same time, it is interesting to see how some network contribute at flaming pro-Russian narratives (see the annex, image 4).

Relevant and alarming are some reactions occurred on traditional media. Indeed, doubts about UK’s version were raised also by mainstream media and high-quality newspapers. In the first group, notably emerges “All the Doubts of Skripal Case”16, a reportage made by “TG3 nel mondo”, a RAI network channel. In the reportage, circulated by the public broadcast service, are mentioned also conspiracy theories. For instance, among other things, at minute 5:40, the journalist in studio said that the attack appears to be an attempt to create problems to Putin few days before Russian elections.

Another interesting article s the “Skripal Case, all doubts about Moscow’s guiltiness”17, published by “Il Sole 24 Ore”, the most prestigious Italian economic newspaper. The author, Antonella Scott, is Deputy Director of the Foreign Affairs” section of the newspaper. In her article, she advances doubts on the Skripal’s recovery – considered “maybe miraculous” – and recalls Saddam’s weapons of mass destruction case to blur the line between known and unknown, suggesting that perhaps the Skripal Case could also be similar to the Saddam’s one.

The Italian reactions to Skripal case highlight and confirm a pattern already present in a previous report: pro-Russian sentiments in Italy are mainly inflated not by trolls or fake news but thanks to a large network encompassing politicians, journalists, media, websites etc. already aligned with Russian narrative. Websites and people disseminating conspiracy theories and fake news on Skripal Case had a limited reach and impact. Key politicians and even Member of the Government, journalists of major newspapers appear to be much more effective.

Apparently, there is a shift of “conservative” political Parties towards Moscow’s views and autoritharism. In fact, some reactions to the Skripal case appear connected with a political linkage of the “new right” with Putin. As a consequence, reactions on events linked with Russia are often not guided by rational analysis but by emotions and feelings.

To counter this Italian trend it’s important to properly address the key political leaders, their new populist parties, and key editorialists, by an effective, discrete and articulated information campaign and narrative and not to be exclusively focused on trolls and fake news.

10 An Italian journalist who is in close contact with Matteo Salvini and knows also Vladimir Putin. He is one of the men behind the agreement between the Northern League and United Russia.

11 An independent association that promotes links between Italy and Russia and has ideas “perfectly aligned with those enunciated by Russian President at Valdai Meeting in 2013”. http://www.lombardiarussia.org/index.php/associazione/lo-scopo

12 This page had so much success that started to sell items to honor Russia and Putin. https://www.facebook.com/figlidelpresidenteputin/ 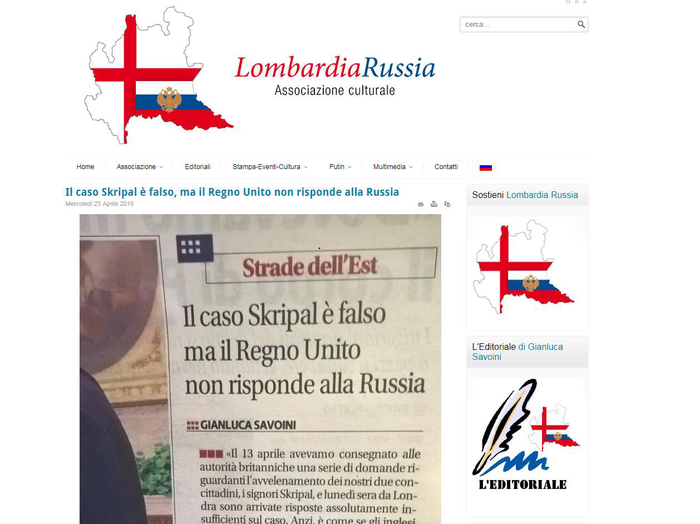 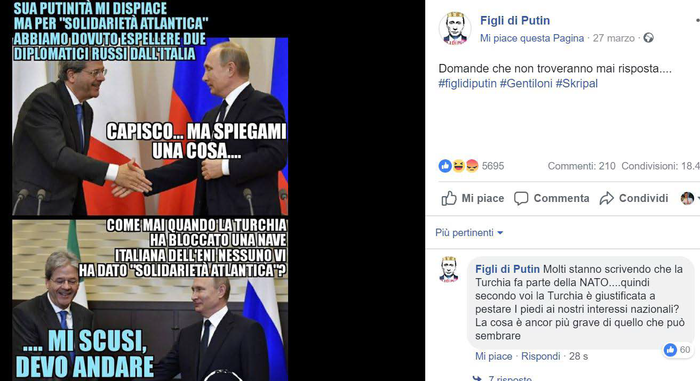 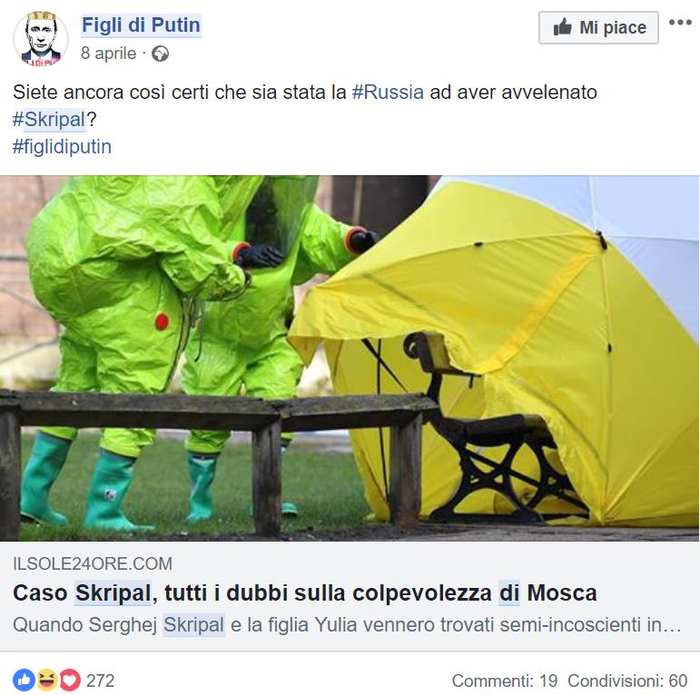 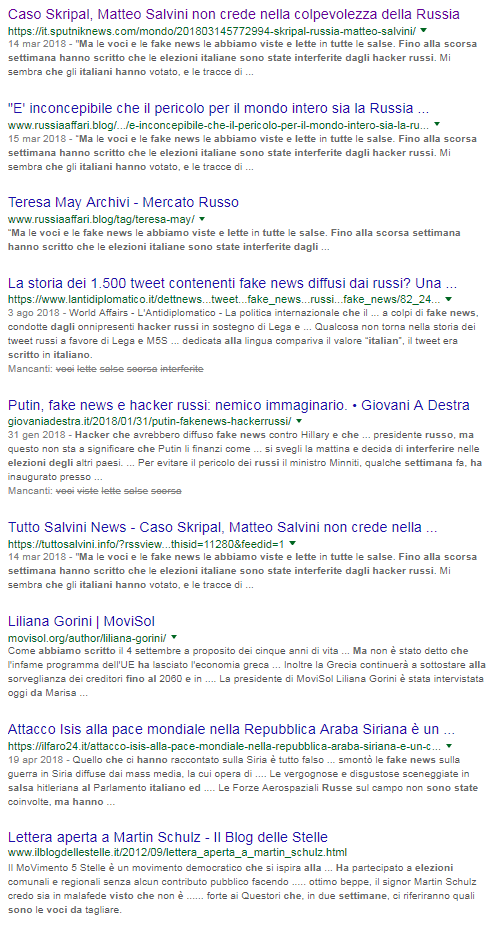