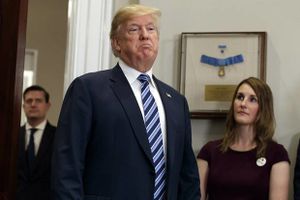 The former British government spy behind the infamous Donald Trump "golden shower" dossier shared his findings with the Federal Bureau of Investigation because he feared the President had been "compromised by a hostile foreign power", leaked secret testimony has revealed.

And while the President tried to dismiss the dossier as "fake news" and a "political witch hunt", the lawyer for the firm behind the explosive documents says "somebody's already been killed as a result of the publication of this dossier".

Democratic senator Dianne Feinstein defied her Republican adversaries on Tuesday when she published the full transcript of Glenn Simpson's secret testimony before the Senate Judiciary Committee investigating whether the President colluded with Russia to win the election.

Simpson is a former journalist whose research company, Fusion GPS, created the explosive dossier that alleged Russia had compiled compromising information on Trump in order to blackmail him.

The 312-page transcript, based on more than 10 hours of testimony, reveals in detail how the firm uncovered what it believed to be a "political conspiracy" designed to make Trump beholden to the Kremlin.

In an effort to protect his client during the hearing, Fusion GPS lawyer Joshua Levy revealed that "somebody's already been killed as a result of the publication of this dossier and no harm should come to anybody related to this honest work". He did not reveal the identity of the person he believes was killed.

The salacious details in the dossier — such as that a Russian spy agency has a video of Mr Trump requesting that prostitutes urinate on a Moscow hotel bed once occupied by Barack and Michelle Obama — have never been verified and have been vehemently denied by the President.

But Simpson maintained throughout his testimony that the information in the dossier, uncovered by former MI6 spy Chris Steele, was "credible" and so concerning that Steele shared his intelligence with the FBI:

"Chris and I were mutually concerned about whether the United States had just elected someone who was compromised by a hostile foreign power," Simpson said.

Fusion GPS did not set out to establish a link between Trump and Russia when it was initially commissioned to investigate him in 2015.

"It was a request to see what we could find out about Donald Trump and, the goal or sort of reason, there wasn't really one. It was, 'Tell me what we need to know about this guy'," Simpson told the committee.

It quickly discovered Trump had "relationships to organised crime figures" in Italy and Russia, and there were allegations of "fraudulent" and "dishonest" business practices.

Simpson also told the committee that the Trump Soho building project was connected to a Central Asian organised crime figure who had been arrested in relation to child prostitution.

"We spent a lot of time trying to figure out whether [Trump is] really as rich as he says he is," Simpson said. "We concluded that his statements about what individual properties were worth were greatly exaggerated and at odds with the information that he'd supplied in legal filings with tax authorities and other records, corporate records," he said.

He added that a number of his golf courses "don't make any money".

In May 2016, after public records had been exhausted, Simpson brought in Steele to gather "human intelligence" about Trump's "opaque" business activities in Russia:

"The basis for the request was [Trump] had made a number of trips to Russia and talked about doing a number of business deals but never did one, and that struck me as a little bit odd and calling for an explanation," Simpson said.

The elevation of Paul Manafort as Trump's campaign manager was also a red flag, given his "long history of dealings with Russian oligarchs".

What they eventually found surprised even them:

"The purpose of this was to see if we could learn more, generally speaking, about [Trump's] business dealings in Russia," Simpson said. "What came back was something very different and obviously more alarming … which outlined a political conspiracy and a much broader set of issues than the ones that we basically went looking for."

He added later: "My expectation was of something a lot less interesting than this, more along the lines of a typical corruption investigation. The thing that people forget about what was going on in June of 2016 was that no one was really focused on this question of whether Donald Trump had a relationship with the Kremlin. So, when Chris started asking around in Moscow about this, the information was sitting there. It wasn't a giant secret. People were talking about it freely."

Steele was so concerned about what he found that he met with the FBI twice, first in July 2016 and again in September:

"Chris said he was very concerned about whether this represented a national security threat and … he thought we were obligated to tell someone in our government about this information," Simpson said. "He thought from his perspective there was an issue — a security issue — about whether a presidential candidate was being blackmailed."

While the "golden shower" allegations were not explicitly discussed in the testimony, Simpson said it was common for Russians to gather "kompromat" — or "compromising material" — about foreign leaders:

"It's well known in intelligence circles that the Russians have cameras in all the luxury hotel rooms … so the problem of kompromat and kompromating is just endemic to east-west intelligence work," he said.

Simpson said Steele's research fit with information the FBI had gained from within the Trump camp:

"My understanding was that [the FBI] believed … Chris's information might be credible because they had other intelligence that indicated the same thing and one of those pieces of intelligence was a human source from inside the Trump Organisation," Simpson said.

He declined to say who the sources of the information were because "people who get in the way of the Russians tend to get hurt". So is the dossier real or fake?

Simpson shared the dossier with multiple media outlets, most of whom declined to publish it because they could not verify its contents. BuzzFeed eventually published all the documents in early 2017, while noting that they contained errors.

When the dossier was published, Trump called it a "political witch hunt".

In his testimony, Simpson stood by the research and Mr Steele.

"It's political rhetoric to call the dossier phoney. The memos are field reports of real interviews that Chris's network conducted and there's nothing phoney about it. We can argue about what's prudent and what's not, but it's not a fabrication," he said.

Simpson admits in his testimony that he was opposed to Trump's presidency, but argued that did not influence his work:

"I think it's safe to say that at some point probably early in 2016 I had reached a conclusion about Donald Trump as a businessman and his character and I was opposed to Donald Trump. I'm not going to pretend that that wouldn't have entered into my thinking. [But] I was a journalist my whole life. So we were trained not to take sides and practised in not taking sides," he said.

Simpson's assertion that the research had no real goal in mind challenges the Republican argument that the dossier was a political document designed to undermine the President:

"There was no objective here, politically," Simpson said.

While Trump has painted Steele as a "failed spy", Simpson vouched for his credibility, saying he was an "extremely well-regarded investigator [and] researcher":

"Chris was, a person who delivered quality work in very appropriate ways … he's basically a Boy Scout," he said "[He] has a sterling reputation as a person who doesn't exaggerate, doesn't make things up, doesn't sell baloney."

Simpson acknowledged there was a danger of Steele being fed "disinformation" but said the former spy was experienced enough to know how to "spot it".

It is important to note that Simpson believes the dossier is "credible" but not necessarily 100 per cent "accurate":

"Chris deals in a very different kind of information, which is human intelligence, human information. So by its very nature the question of whether something is accurate isn't really asked," Simpson said. "The question that is asked generally is whether it's credible … you're trying to figure out who's telling the truth. You decide whether the person is credible, right, whether they know what they're talking about, whether there's other reasons to believe what they're saying, whether anything they've said factually matches up with something in the public record."

Simpson declined to reveal to the committee who paid for the opposition research on Trump and would only say that they were "US-based clients".

The New York Times reported that the research was initially funded by conservative website The Washington Free Beacon, but it was discontinued when Trump emerged as the Republican frontrunner. About April 2016, Hillary Clinton's campaign and the Democratic National Committee paid Fusion GPS to continue the investigation.