Document:Terrorism as Seen From Washington 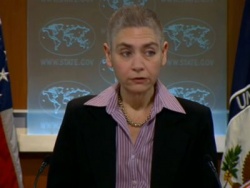 Image right: Ambassador Tina S. Kaidanow, coordinator of the fight against terrorism, during the presentation of her annual report on 30 April 2014

The US State Department released its annual report on terrorism in the world on 30 April 2014. It is a web of contradictions and glaring omissions. It puts Syria at the center of world terrorism but with no mention of Syrians as victims of terrorism during the year. It is a work of pure propaganda

★ Start a Discussion about this document
Terrorism as Seen From Washington

For the United Nations, terrorism is, as defined by the Dutch researcher Alex P. Schmid:

“an anxiety-inspiring method of repeated violent action employed by (semi-) clandestine individual, group or state actors, for idiosyncrati , criminal or political Reason , whereby - in contrast to assassination - the direct targets of violence are not the main targets. The immediate human victims of violence are generally chosen randomly (targets of opportunity ) or Selectively (representative or symbolic targets ) from a target population, and serve as the message generators. Threat -and violence -based communication processes b etween terrorist (organization), ( imperiled ) victims, and main targets are used to manipulate the main target (audience (s) ), turning it into a target of terror, a target of demands, or a target of attention DEPENDING on whether bullying, coercion, or propaganda is primarily sought " [1] .

This definition is intended to condemn acts of resistance to colonialism or imperialism as criminal and clear the crimes committed by the colonial state of Israel and the Western imperialist states, first and foremost the United States themselves.

It likens resistance to terrorism. Before World War II, the term "resistance" meant reactionary forces who opposed Progress. But after World War II, it refers to "any movement that opposes the occupation of a country by foreign forces" in reference to the French Resistance against the Nazi collaborators and civilians or military officials of the Reich.

Al- Qaeda According to the State Department

The State Department report therefore combines the crimes committed against civilians indiscriminately, with the exception of those committed by the Empire, with the deeds of resistance. As it admits that the center of global terrorism is now in the MENA region around Al Qaeda and its affiliates, I carefully read the notices devoted to each country that composes it. Though it admits that there has been 8,800 victims of terrorism in Iraq in 2013, the rest of the document is conspicuous by its omissions.

Who Supports Terrorism According to the State Department

The report reviews the various countries that have suffered from terrorism, with the exception of four it considers responsible for international terrorism, so not victims, but executioners: Cuba (since 1982), Iran (since 1984), Sudan (1993) and Syria (since 1979).

In 2013, there was no terrorism in Syria, according to the State Department, although it is the main destination of Al-Qaeda and the influx of thousands of jihadists posing a problem for United States and its allies. Instead, "the regime has tried throughout the year to present the country as a victim of terrorism, characterizing its armed opponents as terrorists." Severed heads adorning the entrances and central squares of ’liberated zones’ and supported by NATO hold no interest for Washington. On the contrary, it welcomes the split of Al-Nosra and ÉIIL from the National Coalition which is officially sponsored by the US.

It is understood that in view of this revisionist logic, the Obama administration could not accept the demands of the Syrian delegation to the Geneva talks.

Note that Syria is the most often cited state of the report. Indeed, it observes that the jihad in Syria has become a problem for 26 countries that provide combattants and who fear to see them return to commit actions at home. Though the records of the main European and Arab states include this topic, only Kyrgyzstan is mentioned in the rest of the world, even though this problem is widely discussed elsewhere, including in Indonesia. However, we learn in other parts of the report that the problem also arises in all the former Soviet Union.

The contradictions of the State Department

Ultimately, this report contains so many contradictions that it is clear that it is no longer possible for Washington to hide its game. Why ignore the role of Abdelhakim Belhaj in Libya? If not to hide his role in the conquest of the country by NATO and in the attack on Syria. Why ignore the financing of Al-Qaeda by embezzled Turkish public funds by the Prime Minister? If not because this country is a NATO member. Why blame Hamas as a terrorist organization against Israel and ignore that it is domiciled in Qatar? If not because Washington’s policy vis-à-vis the Muslim Brotherhood is uncertain. Why ignore the collections of the Kuwaiti Minister of Justice? if not precisely because they finance Al-Qaeda in Syria. Why ignore the role of Prince Bandar bin Sultan, known as "Bandar Bush"? other than because he was acting on behalf of the CIA.

If anyone still doubts that the "war against terrorism" is a scam and that terrorism in general and al Qaeda in particular are instruments of U.S. policy, this report is further evidence.