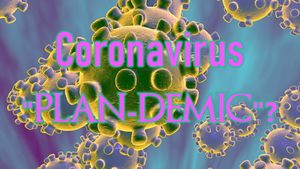 We should be focusing on the Plandemic[1]

★ Start a Discussion about this document
The Big Picture, Easter 2020

That the Establishment is trying to cleanse the Internet of all stories which throw a clear light on vaccinations shouldn’t surprise us in the least. Or that they should try to Swiftboat us with a plethora of fake news descrying witness accounts as fake news.

What we should be focusing on is the Big Picture and all the evidence points to one direction: we are confronted with a Plandemic. The most recent scientific findings simply reinforce this impression.

A possible working scenario could look like this: The Establishment learned from its mistakes of 2009 when there was much hysteria about avian flu etc. This time they decided to hit us harder and faster. The plans for this event have been roughly ten years in the making and the architect and director of this current production seems to be Bill Gates, who’ll also profit from it handsomely if vaccines become mandatory.

The end game seems to be the following: an impoverished, docile, vaccinated, chipped populace that is much reduced in size and most importantly: in wealth.

The whole aim of the economic crash, which has also been carefully planned, is to transfer wealth from the middle classes to the 0.0001%.

The aim of the lockdown seems to be threefold: to destroy the economy, distract attention from the introduction of 5G and to terrorise the populace into accepting voluntary vaccination, which would be its death knell.

If people don’t wake up soon, we’ll all be lost.