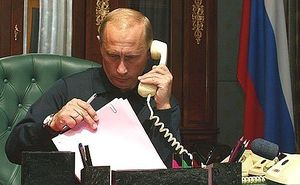 Russia’s publicly funded international media flagship RT has spent a lot of time drawing attention to the various health concerns surrounding 5G technology, though that interestingly enough hasn’t stopped the country itself from going forward with its plans to roll these systems out nationwide and specifically in what the Minister of Moscow’s Department of Information Technologies promises will be “crowded places like parks and central streets”.

Giving Credit Where It’s Due

Winston Churchill famously said that “Russia is a riddle, wrapped in a mystery, inside an enigma”, and this saying holds true sometimes when trying to interpret the country’s policy on certain issues of significance, the latest of which is 5G technology. The New York Times (NYT) ran a very critical piece attacking the editorial line taken by Russia’s publicly funded international media flagship RT towards this topic, which tends to focus almost exclusively on the various health concerns surrounding this technology. The NYT dismisses them all outright just because RT is paying attention to them, even headlining its article “Your 5G Phone Won’t Hurt You. But Russia Wants You to Think Otherwise“,[1] which is ironically enough the exact same reactionary knee-jerk stance that RT itself usually takes towards Western issues. That said, the NYT makes one valid observation that does indeed deserve further reflection, and it’s that RT is waging a campaign against 5G technology at the same time as the Russian government itself is going forward with its plans to roll these systems out nationwide and specifically in what the Minister of Moscow’s Department of Information Technologies promises will be “crowded places like parks and central streets”.

This is an obvious contradiction that raises serious questions about what’s really going on behind the scenes. It’s either the case that RT is onto something big but the Russian government is too irresponsible to even care, or that RT is fearmongering for reasons related to “perception management” purposes and that it’s really the Russian government’s confidence in this technology that the global public should really pay attention to when forming their views on this issue. It might also be that both RT and the Russian government are correct in their own way for reasons that will be explained in a little bit, but first, it’s important to share the words that Minister Eduard Lysenko told Forbes last month in order for the reader to become aware of Moscow’s official position on this controversial matter.[2] Here’s what the famous outlet reported that he said during their interview with him (emphasis added):

“Moscow has already played around with 5G and plans full-scale pilots through 2019. “During the 2018 World Cup,” Lysenko tells me, “MegaFon used Nokia 5G equipment to demonstrate VR Broadcast technology. Fifty people used VR glasses to watch a broadcast. Stadium cameras broadcast to a 5G cell tower, and the cell tower transmitted to smartphones connected to the VR glasses, using up to 35 Mbps per device.” Now, though, “MegaFon has said they have agreed to develop and implement 5G standards in Russia with Huawei.”

And that brings the discussion to the concerns raised by the United States and the United Kingdom, in particular, about the security risks associated with Huawei, including the allegations that the company might facilitate intelligence collection for Beijing. On this subject, Lysenko’s response is short and to the point. “The Russian Federation has strict information security regulations which we always follow.” I suspect Russia and Washington have different views of the threat to their respective national security from Huawei’s alleged intelligence links with Beijing.

Huawei won’t get it all, in any case. “There are other companies with other partnerships,” Lysenko says. “Russian telecommunication operators will choose 5G vendors for pilot zones based on their procurement policies and are now preparing technical standards for 5G technology implementation. After that, the process will accelerate. We cooperate with many equipment providers, including Huawei, Nokia, Ericsson, Qualcomm and IBM.”

And what about Russian equipment manufacturers?

“The decisions are being made by the [network operators] and not the government,” but “we hope that local Russian vendors will come to the pilot projects in order to demonstrate their progress.”

The intention is for the 2019 pilots to build on the success of the World Cup trial, with “full commercial use of 5G expected in 2020-2022.” The 2019 pilots will target key areas in Moscow. “These areas fall into two main categories,” Lysenko explains. “Crowded places, like parks and central streets, where consumer technology 5G tests and demonstrations will be held, and then innovation centres and technoparks, where technology companies will be able to test industrial 5G.”

All of this might understandably be shocking for the average member of the Alt-Media Community who had hitherto been indoctrinated into thinking that Russia was leading the global charge against 5G technology, though that notion has just been exposed as a completely false narrative manufactured by the masterful use of perception management techniques just like the equally false one about Russia supposedly being an “anti-Zionist crusader state” in spite of its alliance with the Zionist entity through “Putinyahu’s Rusrael“.[3] The fact of the matter is that while RT is telling the English-language international audience to be wary of 5G technology, the Russian state itself is already experimenting with it and doesn’t seem the least bit concerned about the potential health effects that it could have on its people. It’s not only its own people that it isn’t worried about, but also the millions of tourists who travelled to Russia for the World Cup last summer and had no idea that this technology was secretly being used in stadiums.

So confident is Russia in the safety of 5G technology that it’s even testing it in “crowded places like parks and central streets” in Moscow (the largest city on the European continent with over 10 million people) all throughout this year in preparation for rolling it out nationwide in 2020-2022. That, however, doesn’t necessarily mean that RT is deceiving the masses by warning them about the possible dangers of untested 5G technology, but just that its editorial angle is probably a strategic one that adheres to the company’s motto to “Question More”. To explain, RT almost always takes the opposite approach to whatever the Mainstream Media’s is on any given issue, with the outlet being much more reactive in responding to its counterparts’ narratives in practically all cases than proactive in independently shaping its own and putting others on the defensive. That seems to be the case with their reporting on 5G, which appeals to their targeted audience precisely because it’s being suppressed by the Mainstream Media.

RT’s stance on this topic has in turn inadvertently cultivated the misleading impression that the Russian government itself is also wary of this technology because of the assumption that its audience naturally makes that the company’s content must somehow be approved by the Kremlin. The truth is that while RT is publicly financed, it’s editorially independent for the most part, and the case of its 5G reporting is proof of that. It’s mind-boggling to imagine the convoluted explanations that would go into supporting the conspiracy theory of RT openly contradicting its state patron in its coverage of the 5G issue as part of some nefarious plot to undermine the West when it can be argued that doing so also runs the very high risk of undermining Russia’s own policy towards this technology and therefore raising uncomfortable questions about its true intentions. The very fact that the NYT picked up on this proves that RT might have to revise its editorial stance in order to take into account the global community’s increased awareness about Moscow’s official position.

That would be for the better too since one of the most popular constructive criticisms that can be made about Russian policy in general is that it usually fails to properly explain its new approach towards certain issues that its intended audience previously assumed was permanently unchangeable. For example, Russia’s Afro-Eurasian “balancing” act[4] is specifically predicated on pioneering new partnerships with its former rivals like Turkey, Saudi Arabia, and the global pivot state of Pakistan,[5] but its international media outlets haven’t articulated the strategic reasons why this is happening to their audience, which has therefore led to a lot of confusion among the people who thought that Moscow wouldn’t ever befriend the adversaries of its traditional Syrian, Iranian, and Indian partners. The same can be said for Putin’s recent proclamation to build a hypersonic missile defence shield despite nearly two decades of very vocal opposition to the US’ conventional version of this system.[6] It would therefore be useful if RT was tasked with explaining the nuances of these changed policies as well as the state’s official stance towards 5G technology.

All told, while the NYT veritably published a vitriolic hit piece intended to defame RT, it nevertheless touched upon an important point in drawing attention to how the network’s coverage of 5G technology contradicts its state patron’s official policy on this issue. This isn’t the result of a “cunning plan”, but rather narrative clumsiness which incidentally proves the company’s editorial independence since it would otherwise complement the country’s internal policies if it was truly a strategic instrument of the state. The very fact that it doesn’t will likely be celebrated by some but criticised by others who would be right to say that this is a serious soft power vulnerability that continues the existing trend evidenced in the the country’s international media coverage of its Afro-Eurasian “balancing” act and hypersonic missile defence shield plans. Both failed to account for Russia’s changing policies towards these two issues and resultantly lead to a lot of unnecessary and ultimately counterproductive confusion, which is why the best approach would be for the network to incorporate the state’s contemporary policy towards any issue into its information products, and it could start by doing so with the topic of 5G technology.