Document:The Meaning of the US Saber-Rattling at the Borders of Russia 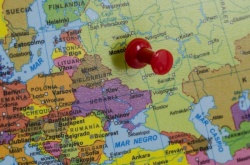 Hardly a day ever passes without the western corporate media reporting that USN warships have entered the Black Sea, the US Army is sending instructors to train the Ukrainian military, US joint task forces are organizing maneuvers in the Baltic or US Army units are making highly publicized movements from the Baltic states to Poland. And every time this happens, Russian diplomats and officials make protests and declare that such actions are only making matters worse and contributing to the destabilization of an already very tense situation. Russian officials also like to remind everybody that NATO is roughly 4 times bigger than the Russian military and that the US has bases all around Russia. So are we to conclude that the Pentagon is preparing to attack Russia or to intervene militarily in the Ukraine?

I believe that such a conclusion would be premature. Here is why:

The first thing to keep in mind is there is absolutely no need for the USA to forward deploy anything to attack Russia. I would even argue that forward deploying units or systems close to Russia put them at risk and make them a much easier target for Russia to strike. This is especially true of any USN ship entering the Black Sea which is completely “covered” by Russian coastal defense missiles. One Russian expert declared that Russia could destroy any ship anywhere in the Black Sea is 20min or less. This is probably an accurate figure. If the Pentagon was preparing to attack Russia it would pull US units and systems *away* form the Russian border, not closer. The US has plenty of very effective long range strike capabilities including ballistic and cruise missiles.

The second undeniable fact is that under any conceivable scenario Russia does have the means to basically completely destroy the USA as a country in about 30min (the USA, of course, can do the same to Russia). Any US war planner would have to consider the escalatory potential of any military action against Russia. It is theoretically possible that in the future the USA might have a means to protect itself from such a retaliatory attack by using a combination of its future Prompt Global Strike system, the forward deployed Active Layered Theater Ballistic Missile Defence system and the US National Missile Defense programs. Personally, I don’t believe that such a system would ever protect anybody against a Russian counter-attack, but even if it does, this will be far away in the future. Currently these systems are not operational and will not be so for the foreseeable future.

The entire notion of sending lethal aid to the Ukraine or instructors to train the Ukrainian military is utter nonsense. The Ukraine used to be in the Soviet second strategic echelon and it is absolutely full of weapons of all kind, and there are plenty of experts capable of using them. The problem of the Ukrainian military is neither a lack of weapons nor a lack of experts, but a lack of motivation by the vast majority of Ukrainian soldiers to go and fight in the Donbass against highly-motivated and very skilled Novorussian forces. Furthermore, it is abundantly clear for everybody (including the Ukrainians, of course) that should the Novorussian defenses crumble then Russia would have to intervene militarily to protect the Donbass. . The Ukrainians can claim that they are already fighting hordes of Russian solider and tanks (up to 200,000 according to a recent interview of Poroshenko), but everybody in the Ukraine fully understands that it would take the Russians no more than 24 hours to completely wipe out the entire Ukrainian military.

Some would argue that what the US is doing is setting up a “tripwire force”, just small enough to be attacked, but one whose destruction would warrant a full-scale US counter-attack. There are two problems with that theory. First, these deployments are happening in NATO member states whose areas are already protected by the “political tripwire” of Article 5 of the Washington Treaty. There is simply no need for any kind of tripwire force in a NATO member state. Furthermore, nobody in his right mind would seriously believe that Russia might attack any European country. Sure, the EU and US politicians will try to terrify the Europeans with images of Russian hordes invading the Baltics, Poland or even Germany, but they all know that this is utter nonsense. For one thing, the Russian military is simply not configured to execute such a mission as it does not have the required power projection capability. And there is no political force in Russia even suggesting such a move. And why would Russia do that anyway? I cannot think of a single reason for such a crazy move.

In reality, what the US military is doing is called “showing the flag”. This is purely a political statement and not, in itself, a preparation for an attack. In fact, I would argue that deploying US units in the Baltic states would be just about the worst possible way to prepare for an attack.

That does not mean that a war cannot happen. It very much can. First, there is the obvious risk of mistake and miscalculation. Then, it is really dangerous to see the kind of completely irresponsible statements regularly made by top US officials ranging from Obama’s idiotic claim that Russia is somewhere between ISIS and the Ebola virus in the list of major threats to the world or the more recent declaration of a JCS Nominee General Joseph Dunford who seriously declared that “Russia presents the greatest threat to our national security”. This kind of reckless fear-mongering can become a self-fulfilling prophecy and result in an actual war, if only because of the confrontational atmosphere it creates.

So why are the Russians so upset about this saber-rattling if it really presents no real risk for Russia?

The main reason is that these highly inflammatory actions and statements create a sense of crisis which contribute to isolate Russia from the rest of Europe – a key US foreign policy objective. This was also the main goal for all the US attempts at drawing Russian into the conflict in the Ukraine: to create a huge crisis and re-ignite a Cold War II in all of Europe. After all, the Europeans who are now busy with the Greek crisis, the tanking economy, social issues such as immigration and crime would rapidly turn to other issues if the main topic on all news shows became the “Russian threat to Europe”. The politics of fear are well-know: obedience, passive acceptance of the dismemberment of social, human, political and civil rights, the creation of a scapegoat on which any crisis could be blamed, etc. Having failed to re-ignite a Cold War II by means of a Russian “invasion” of the Donbass, the US now has fallen back on the option of acting as if such a military move did happen and that the rest of the Ukraine, the Baltics and Poland “are next”. Hence the need to “protect” them by such public display of the US military presence.

Russia is walking a tight line here: she needs to avoid looking weak or frightened while also avoiding contributing to the further degradation of the situation. Hence the apparent Russian policy of “one step forward, one step backward” towards the US/NATO/EU.

The US will probably only achieve a moderate degree of success in its desperate campaign to present Russia as a threat to the world. After all, there are only so many gullible doubleplusgoodthinkers out there willing to buy this silly notion. The problem is that regardless of the real feelings of most Europeans, the EU’s comprador ruling class will continue to act as if the threat was real. The same goes for the Empire’s propaganda machine (aka “corporate media”).

The current saber-rattling is therefore likely to continue as long as the EU is run by US-puppets.