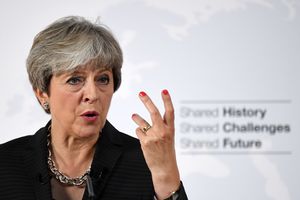 We’re often told by political commentators that Brexit is failing because Britain’s Prime Minister, Theresa May, is trying to keep her Tory party together by pleasing both Leavers and Remainers. True. But this doesn’t explain the roots of the Brexit division.

Theresa May’s historic defeat over the current terms of her Withdrawal Agreement from the European Union[1] ended with her agreeing to let Members of Parliament (MPs) vote on a motion to take her no-deal bargaining chip off the table.[2] This has weakened her position at the Brexit negotiations in Brussels. But given that most MPs won’t support no-deal, and few support her current deal, May has no other option. Three of May’s MPs resigned and co-founded a new, pro-Remain independent group, along with disaffected Labour MPs.[3] More Tories are threatening to resign.

Another spanner in the works is opposition leader Jeremy Corbyn’s reluctant confirmation that Labour will support a Second Referendum.[4] Corbyn’s move has decapitated the pro-Remain independent group because fewer Remainers will now support the group, turning instead to Labour, which has a much greater chance of electoral success than The Independent Group. Simultaneously, Corbyn’s well-timed move has further weakened May by giving pro-Remain Tories more incentive to support a Second Referendum.

The US politician and businessman, George P. Shultz, is credited with saying:

“He who walks in the middle of the road gets hit from both sides.”

Given this truism, we should ask why Theresa May has walked the middle path of Brexit ever since her predecessor, David Cameron, resigned? Why didn’t she just revoke Article 50 and end the Brexit chaos (pleasing the Remainers) or simply prepare for a no-deal and let the UK withdraw on so-called WTO terms (pleasing the Leavers)? Why does her proposed Withdrawal Agreement keep the UK in a customs union until Brussels lets Britain leave?[5]

The most common answer is that May is trying to keep her fractured party together. The theory goes something like this: If Theresa May goes too far to the right and pleases the Northern Irish Democratic Unionist Party (DUP) — the party propping up her minority government — as well as bending to the wishes of the European Research Group, whose MPs want a no-deal Brexit, she risks alienating the so-called moderates in her party, who either want to remain in the European Union or at least adopt the softest possible Brexit.[6] The DUP might end their confidence-and-supply deal and collapse May’s minority government. This would trigger a general election. May could lose her job and even the Tory party’s grip on power—such as it is. If she goes too far to the left and pushes for a soft Brexit, she could alienate both her centrist and right-wing MPs.

This is a fair and accurate analysis. However, it leaves out other crucial factors that most commentators don’t seem keen to discuss. The reality is that May is serving two constituents. They are not the ordinary people who voted Leave and Remain. They are the business constituents that fund the Tory party. Roughly half the Tory donors are status quo businesses, as represented, for example, by the Confederation of British Industry — the organisation that publicly supported May’s deal but privately conceded that it is no good.[7] They want to stay in the EU.[8] In 2016, over a thousand businesses put their signatures on a letter stating that Brexit is a bad idea.[9]

Politically, they are represented in the Tory party by people like Kenneth Clarke MP. These MPs and the businesses they champion enjoy the UK’s ability to trade and invest in a low-tariff, open borders customs union. They support the kind of neoliberal institutions that advance deregulation and privatisation. Read, for instance, Clarke’s statement on Brexit (at column 1042).

The trouble is that the other half of the party’s funding comes from banks and financial services providers.[10] It’s true that many banks want to Remain in the EU, but many financial services want to Leave. The latter group includes asset managers and hedge funds. Only 300 of these and other businesses signed a letter in support of Brexit.[11] But their power is more concentrated than that of the Remainer businesses. After the global financial crisis, which was caused by neoliberal deregulation of the kind supported by the pro-EU groups, the EU was compelled by grassroots pressure to introduce some restrictions on the financial services industries that had caused so much damage.

EU legislation was introduced, including MiFID and MiFID 2.[12] These directives harmed the profit potential of London’s major financial traders, especially hedge funds and asset managers. When the EU Referendum was announced, two political analysts started contacting financial institutions in an effort to understand what was going on. They discovered that “a powerful minority, mainly comprising hedge funds, has emerged within the financial sector and is in favour of leaving,” so that the UK can escape the clutches of EU financial regulation.[13]

In fact, the most ardent Brexiteers work in financial services: Michael Hintze, Crispin Odey, Peter Hargreaves, Arron Banks, and others. All of them are either big Tory donors or UKIP supporters. Banks allegedly suggested that UKIP supporters join the Tory party at the grassroots in order to push it further to the right.[14] Then-Home Secretary, Theresa May, allegedly blocked police efforts to investigate Banks’s role in funding the Leave campaign.[15] MPs reflexively point the finger at Russia. (See Tom Brake MP at column 215). Politically, the wealthy Leavers and their institutions are represented by Tories like Jacob Rees-Mogg of the European Research Group. These political Brexiteers also want a totally deregulated financial services sector.

Meanwhile, ordinary working-class people pay the price for these elite games, as usual.