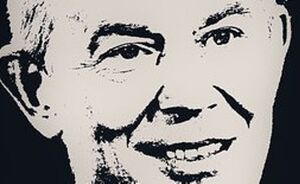 The bloody legacy of Bomber Blair

The announcement that Tony Blair was awarded the highest honour – a 'Knight Companion of the Most Noble Order of the Garter' – in the Queen’s New Year Honours list has, unsurprisingly, generated a massive backlash. Let’s briefly remind ourselves of Tony Blair’s record as prime minister (between 1997 and 2007) and his political legacy.

We must inevitably start with Iraq – the war, and Britain’s role in it, shapes Blair’s reputation to this day. Hundreds of thousands of Iraqis were killed in the 2003 US-led invasion and the occupation that followed, with the country’s infrastructure wrecked. The occupation bred chaos and instability, ultimately giving rise to the horrors of ISIS. Britain played an important military role and its participation was politically very significant for the US in 2003.

Blair was decisive in getting Britain involved in the invasion and occupation, staking his reputation on it. He spurned diplomatic efforts and treated international law with indifference. The Chilcot Report in 2016 revealed the extent to which Blair manipulated (or even fabricated) evidence and distorted reality in a desperate bid to justify the war.

Blair’s foreign policy was dominated by acquiescence to the White House. Iraq was the totemic opportunity to demonstrate allegiance to Washington. Attacks on civil liberties, state-sanctioned Islamophobia and complicity in torture all followed.

Iraq was part of a bigger picture. In his famous Chicago speech in 1999, Blair stressed his commitment to ‘humanitarian intervention’, seeking to legitimise military interference in other countries. After the terror attacks of 11 September 2001, this translated into a practical commitment to the ‘War on Terror’, with full participation in the invasion and subsequent occupation of Afghanistan. Recent events have exposed the folly and failure of the war in Afghanistan.

Iraq was the main target, though, and it became clear that Blair would defy mass popular opposition – including Britain’s largest ever demonstration, on 15 February 2003 – to prosecute the war. He has never expressed regret for this. There is abundant evidence that he would have extended military conflict to Iran if it had been politically feasible.

These wars led to nightmarish occupations and fuelled a rise in terrorism. They became the pretext for curtailing human rights and engaging in torture. They turned people into refugees. Domestically, they eroded trust in politicians and generated a profound democratic deficit: with Labour and Tories united behind war, millions of people increasingly felt disenfranchised.

Blair is retrospectively hailed as Labour’s great election winner, yet he inherited a party, in 1994, with a massive poll lead over the Tories and proceeded – from 1997 onwards – to oversee a steep decline in the party’s popular vote. The continuing dislike of the Tories, thrown out after 18 years in office, ensured that Blair’s Labour could keep winning elections.

Blair campaigned on ‘education, education, education’, then announced the scrapping of free university education – via the introduction of tuition fees – within his first year in Downing Street. He stubbornly stuck to Tory public spending limits for the first two years. When spending on public services later rose, the benefits were undercut by an obsession with outsourcing, private finance initiatives and opening the public sector up to free market principles as much as possible. Social security claimants were stigmatised, child poverty remained a major social problem and inequality actually grew.

This was a version of neoliberalism, embedding many of the economic and social changes associated with Thatcherism. Productivity remained low, privatisations were not reversed, the financial sector was dangerously deregulated, state intervention was scorned and trade unions remained shackled by draconian laws.

Blair was in the vanguard of the centre left’s capitulation to free market dogma, championing an important shift that took place across much of Europe and beyond. He embodied the ethos of neoliberalism at home and neoconservatism abroad. No wonder Margaret Thatcher once confided that she regarded New Labour as her greatest achievement.

Blair’s latest honour is a reward for his loyalty and service to the British establishment and its interests. It is an insult to those who have suffered in Iraq and Afghanistan, whether it is the British soldiers who died in vain (and their families) or the civilians of those devastated countries. Such an honour rests upon expecting us to conveniently forget or ignore the enormous damage that Blair did. People are right to be angry.[1]