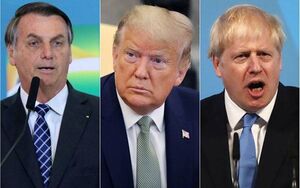 The Populist Right has had a bad week. Dominic Cummings left Downing Street on Friday after his relationship with Boris Johnson, according to reports, ‘fell off a cliff’. Donald Trump may still be refusing to acknowledge his election defeat, but he is on his way out of the US presidency.

So what does all this mean? Will this be the end of the populist right? Are we about to see a return to ‘normality’, much wished for by liberals and centrists? That’s certainly the hope of those who put their faith in Joe Biden and who express the wish that Johnson too will soon be gone.

However, first we have to understand what has and has not been happening in recent years. The key here is that there has not been a simplistic shift either to the left or right but a process of polarisation. The aftermath of the banking crisis of 2008, the failings of neoliberalism, and the increasingly dire straits in which millions of people around the world find themselves, has led to this polarisation which has seen the growth of far-right movements and parties but also of those movements to the left of social democracy, demanding radical left-wing policies.

The polarisation on the right led to the election of Trump which in itself gave a huge boost to right wing ideas. Other rulers from Bolsonaro to Johnson took heart from his election, while his views on race, migration, nationalism, were broadcast to fellow thinkers world-wide. His rallies in the US boosted organisation on the ground, and they were out in his support in Washington at the weekend.

The existence of this populist right marks a departure from the post-war consensus, where centre parties tended to dominate internationally, and is a real threat. The next four years may see a hardening of support for Trump type policies in the US, with some drawing the conclusion that Trump did not go far enough. But while it contains fascist and far right elements within it, it is not fascist.

I always felt that too much of the talk of impending fascism which tended to centre in this country on Brexit and Trump was at best simplistic. The defeat of Trump and the axing not just of Cummings but his Vote Leave crowd as government advisers suggests that whatever advantage the populist right has managed to achieve was gained largely within the structures of the existing political system and not as a street movement capable of smashing working class and left organisation, which is a defining characteristic of fascism proper.

The polarisation on the right has been matched by one on the left. The impact of the crisis has led people throughout the world to look for radical solutions to the left – more public spending and ownership of utilities and industry, green policies, taxing corporations and the wealthy. We see the impact of this in terms of various measures of public opinion which still show support for a range of egalitarian policies, with the growth of social movements, and we see it in the various attempts at political representation of the left, for example with the Syriza government in Greece, Corbyn’s leadership of Labour, Sanders’ candidacy in the US and Melenchon’s France Insoumise.

The truth is, however, that the left electoral alternatives have been unable to break through, partly because they have not been sufficiently challenging to the state and to its loyal representatives, including those in the social democratic and centre parties. It’s precisely these people who are at present breathing a sigh of relief, hoping that all will be returned to the status quo ante and that Biden in the US, and they hope a figure like Rishi Sunak or even Keir Starmer here, will help hold the centre.

But there will be more polarisation ahead, and the centre will not hold. The votes for Trump and for Brexit in 2016 were much misunderstood as all visceral hard right, nationalist and racist votes. They were much more complex than that and expressed at least in part a desire to kick back against a neoliberal world which has left millions of people in countries like the US and Britain living and working in much worse conditions than ones they might have expected a generation or two ago.

The failure of the centre to address these issues, let alone promise to reverse the situation, has led to an anger and discontent which is at the root of the polarisation. Biden can offer little to those in Ohio and Pennsylvania whose jobs have gone, whose children face insecure and poorly paid employment, where records of addiction are high and where life expectancy is lowering. The same is true of the ludicrous claim of Cummings and Johnson to ‘level up’ the north of England.

The coronavirus crisis has brought this into relief. There looked like a moment when the ruling classes in the richest countries might embrace a new Keynesian strategy, with large amounts of government investment in industry, public services and healthcare. But that hasn’t happened, because for capitalism in the age of neoliberalism, to do so would be to admit its total failure as a system – and that it can’t do.

So instead vast sums of public money go to privatised companies like Serco, a byword for inefficiency; furlough schemes subsidise employment while companies continue to pay dividends to shareholders; private consultants queue up to feed at the trough; and we’re promised a rerun of Eat out to Help out, which combined helping the virus spread while giving a free lunch to those who could already afford it.

Meanwhile key workers – clapped in the streets and praised for their sacrifice – face job cuts, wage controls, and increased pressures of work. Working class people are more than ever having to pay for the crisis, and while they do the polarisation will continue.

While our rulers have moved to the right in the past decades, accepting austerity, growing inequality and using scapegoating in their defence, they see even quite modest left proposals such as nationalisation as a major threat. That’s why Corbyn and Sanders were simply unacceptable as leaders of major political parties.

The crucial questions facing working class people can only be settled by their own struggles, of which the outcome is by no means certain. There are many small struggles going on at present which workers are winning, but we need much more and on a much greater scale. This will help determine the political outcomes of the next few years.

The defeats of Trump and Cummings are welcome to socialists everywhere, but they are by no means the end of the story. The continued failures of neoliberalism and the political centre will create conditions for an even more extreme reaction, possibly with a larger actual fascist component, in the next round. Even now there will be forces on the right saying ‘Trump didn’t go far enough’, just as on the left in this country many are saying ‘Corbyn didn’t go far enough’.

But what the defeat of today’s populist right shows is that there is still everything to play for – and that the crisis can have more than one outcome.