Document:There is no military solution in North Korea 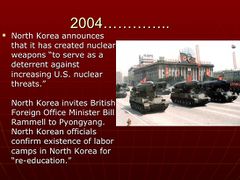 MH: Bill Rammell was a Foreign Office Minister during the last Labour Government and he visited North Korea in 2004.[2] He is the only UK Minister to have ever been there and he is on the line now. Good morning, give us a sense first of your impressions on that visit. What was it like?

BR: It’s the strangest place on earth I’ve ever been to. People often ask me what it was like and I say think of the former Eastern bloc and multiply it by about ten, and you begin to get close to the regime. It’s completely cut off, isolated. This was under the previous leader then Kim Jong-il. There was a cult of personality I’ve never seen the like of anywhere with 20-foot billboards on every street corner with his picture. I remember being taken to a goat farm and the officials told me and accompanying journalists that the farm had actually been designed by the Great Leader. And I kinda looked them in the face and said you really expect me to believe that, don’t you? It’s utterly bizarre.

MH: The time you were there was before the first of the nuclear tests. Given the approach you’re describing do you think that these are officials with whom a dialogue is possible.

BR: I think you have to attempt a dialogue…look the current situation is extraordinarily concerning. In the current leader Kim Jong-un you’ve got a calculated risk-taker and that’s in part about bolstering his domestic position. North Korea clearly does have nuclear weapons. And on the other side we’ve got a US administration where the president Donald Trump is adopting I think a very risky and scattergun approach hinting at preemptive strikes. And that increases the risks of miscalculation. There needs to be a concerted movement on the part of the international community. The US is not going to achieve that whilst, for example, calling the South Korean president…accuses him of appeasement. The US needs to bring the international community together more effectively.

There is no military solution. The Clinton administration looked at that when it was in office and the collateral damage in terms of enormous loss of life in Japan, South Korea and elsewhere would be unacceptable.

MH: So should our government then be trying to tone down what the Americans are saying? There’s what you’ve outlined but there’s also the suggestion that any country that does business with North Korea is aiding its nuclear intentions.

BR: Well, I do think that trade with North Korea is a key issue. I don’t actually think that ultimately the US would be able to carry through on that threat, because it would invite retaliation from China. That would cost the US very dearly. There certainly does need to be reinforced UN sanctions and that requires dialogue – sensible dialogue – but also directly with the Chinese Government. Ninety per cent of North Korea’s trade is with China.

China has political leverage and has always been historically reluctant to act. I think the calculus may be changing, and a sense that the Chinese regime realises that inaction may be worse than action.

For example this latest missile test took place whilst the Chinese president was hosting a BRICS summit in China – the worst possible circumstances.. That suggests that China is not having it easy and I think it needs to be pressed towards taking stronger action.