Document:Towards the End of US Propaganda 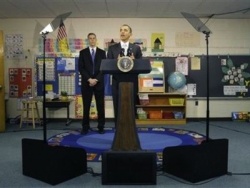 Image right: Barack Obama speaks well. In fact, President Obama does not write his own texts but spends his days reading speeches written on prompters for him. Meanwhile, others govern in his place.

Author's Note The Anglo-Saxon Empire is based on a century of propaganda. It managed to convince us that the United States is "the land of the free" and that it engaged in wars to defend its ideals. But the current crisis over Ukraine has changed the rules of the game. Now Washington and its allies are not the only speakers. Their lies are openly challenged by the government and media of another major state, Russia. In the era of satellites and the Internet, Anglo-Saxon propaganda no longer works.

★ Start a Discussion about this document
Towards the End of U.S. Propaganda

Rulers have always tried to convince their subjects of the correctness of their actions, because crowds never follow men they know to be bad. The twentieth century has seen new ways of spreading ideas unburdened by the truth. Westerners trace modern propaganda to Nazi minister Joseph Goebbels. It is a way to forget that the art of distorting the perception of things was previously developed by Anglo-Saxons.

In 1916, the United Kingdom created Wellington House in London, followed by Crewe House. Simultaneously, the United States created the Committee on Public Information (CPI). Considering the First World War was between masses and no longer between armies, these organizations tried to intoxicate their own people as well as those of their allies and those of their enemies with propaganda.

Modern propaganda started with the publication in London of the Bryce Report on German war crimes, which was translated into thirty languages. According to this document, the German army had raped thousands of women in Belgium. The British Army was thus fighting against barbarism. At the end of the First World War it was discovered that the entire report was a hoax, made up of ​​false testimony with the help of journalists.

For his part, in the United States, George Creel invented a myth that World War II was a crusade by democracies for peace to protect the rights of humanity.

Historians have shown that World War I was responding to causes as deep and as profound, the most important being the competition between major powers to expand their colonial empires.

The British and U.S. bureaus were secret organizations working on behalf of their states. Unlike Leninist propaganda, which aspired to "reveal the truth" to the ignorant masses, the Anglo-Saxons sought to deceive in order to manipulate them. To this end, Anglo-Saxon state agencies had to hide and usurp false identities.

After the demise of the Soviet Union, the United States neglected propaganda and favoured public relations. It was no longer a matter of lying, but of holding journalists’ hands that they may see only what they are shown. During the Kosovo war, NATO appealed to Alastair Campbell, an adviser to the British Prime Minister to tell the press an uplifting dayly story. While journalists reproduced this story, the Alliance could bomb "in peace." The story telling was less designed to lie than to distract.

However, story telling is back with a vengeance with the September 11 attacks : it consisted of focussing public attention on the attacks on New York and Washington so that people would not perceive the military coup organized that day : the transfer of the executive powers of President Bush to a secret military unit and the house arrest of all parliamentarians. This intoxication was especially the work of Benjamin Rhodes, now an adviser to Barack Obama.

In subsequent years, the White House installed a system of propaganda with key allies (the UK, Canada , Australia and of course Israel). Every day these four governments received instructions or pre-written speeches from the Office of global media to justify the war in Iraq or vilify Iran. [1]

For the rapid spread of its lies since 1989, Washington relied on CNN. Over time, the United States created a cartel of satellite information (Al- Arabiya , Al- Jazeera , BBC , CNN, France 24 , Sky) channels. In 2011, during the bombing of Tripoli , NATO surprisingly convinced Libyans that they had lost the war and that it was useless to continue resisting. But in 2012, NATO failed to replicate this model and to convince the Syrians that their government would inevitably fall. This tactic failed because the Syrians were aware of the operation carried out by international television in Libya and were able to prepare [2]. And this failure marked the end of the hegemony of the "information"cartel.

The current crisis between Washington and Moscow about Ukraine has forced the Obama administration to review its system. Indeed, Washington is now no longer the sole speaker, it must contradict the Russian government and media accessible anywhere in the world via satellite and Internet. Secretary of State John Kerry appointed a new deputy for propaganda, in the person of the former editor of Time Magazine, Richard Stengel [3]. Before taking the oath on April 15, he was already occupying his office and, on March 5, sent a "fact sheet" to major Atlanticist media on "10 counter-truths" that Putin would have pronounced on the Ukraine [4]. He reoffended on April 13 with a second sheet with "10 other counter-truths " [5].

What strikes one in reading this prose is its ineptitude. It aims to validate the official history of a revolution in Kiev and discredit the Russian discourse on the Nazi presence in the new government. However, we know today that in fact this “revolution” was indeed a coup staged by NATO and implemented by Poland and Israel by mixing recipes for "color revolutions" and the "Arab spring". [6] Journalists who received these files and relayed them are fully aware of the recordings of telephone conversations between the Assistant Secretary of State, Victoria Nuland and Minister for Estonian Foreign Affairs, Urmas Paets, on how Washington would change the regime at the expense of the European Union, and on the true identities of the Maidan snipers. In addition, they learned later revelations of the Polish weekly Nie about the training two months before the events of the Nazi rioters at the Academy of Polish police. As to denying the presence of Nazis in the new Ukrainian government, this amounts to a claim that the night is luminous. It is not necessary to go to Kiev but just to read the writings of the current ministers or listen to their remarks to see this is the case. [7]

Ultimately, if these arguments help give the illusion of a consensus in the large Atlanticist media, they have no chance of convincing curious citizens. Instead, it is so easy with the Internet to discover the deception that this type of manipulation cannot but further undermine Washington’s credibility.

The unanimity of the Atlanticist media on September 11 helped convince international public opinion, but the work done by many journalists and citizens, of which I was the precursor, showed the physical impossibility of the official version. Thirteen years later, hundreds of millions of people have become aware of these lies. This process will only grow with the new propaganda devices manipulated by the US. In short, all those who relay the arguments of the White House , including the governments and media of NATO, destroy their own credibility.

Barack Obama and Benjamin Rhodes , John Kerry and Richard Stengel act only in the short term. Their propaganda convinces the masses for only a few weeks and then helps create revulsion when the people understand they are being manipulated. Unwittingly, they undermine the credibility of the state institutions of NATO who consciously relay them. They forget that the propaganda of the twentieth century could only succeed because the world was divided into blocks that did not communicate with one another, and this monolithic principle is incompatible with the new means of communication.

The crisis in Ukraine is not over, but it has already profoundly changed the world : by publicly contradicting the President of the United States, Vladimir Putin has taken a step that henceforth prevents the success of U.S. propaganda.