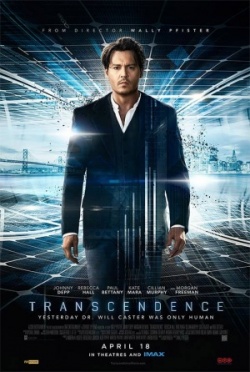 Thought-provoking deconstruction of the 2014 Hollywood film Transcendence - PAP for the masses but, as is so often the case with Hollywood Sci-fi, containing solid pointers to what the Elites have in store for humanity - for those with eyes to see.

...Yet do you really think all those underground supercomputers and all that nanotech wizardry is being developed to make everyone a god, as if it will be doled out in a government cheese line? Given the colossal lies the establishment foists upon the public daily, are you truly that stupid?

Transcendence [1] is the ultimate transhumanist film to date. Convalescence would have been a better name. The film begins with some cataclysmic future event that has caused the collapse of civilization to a pre-electrical state. Rewind a few years, and we see Johnny Depp as Dr. Will Caster, a scientist who specializes in artificial intelligence on the verge of discovering the final key to mapping the human mind so it can be downloaded onto a floppy disc. Dr. Caster calls this point of singularity “transcendence,” where man will finally overcome his bodily limitations and load himself up to Youtube. Following a presentation at a tech conference on how man will create “god,” Dr. Caster is mortally wounded by a radical anti-tech Luddite group, RIFT (Revolutionary Independence From Technology), leading to his desire to be the first willing test subject of human AI. Simultaneously, attacks on AI labs occur nationwide, prompting FBI involvement. Dr. Caster, as you might guess, is successfully downloaded into a computer, leading to an exponential growth in his intelligence and power enabling him to become a ghost in the machine accessing infinite data.

After becoming Max Headroom, Caster hacka into the supercomputer PINN (Physically Independent Neural Network) he formerly worked on to track and identify all the members of RIFT globally The true reveal here is not that Johnny Depp can be placed on a thumb drive like Scarlett in Lucy, [2] but that what is real are the NSA supercomputers that can literally track anyone, anywhere through AI, just like PINN can in the film. As I have written many times, the NSA supercomputers exist to do this very thing, ultimately achieving real-time, 3D modelling of all events. NSA programmer William Binney recently revealed to the mainstream what had been known for a long time to alternative media: The purpose of all this tech surveillance and grid has nothing to do with terrorism, and everything to do with AI and panoptic population control.

The Guardian recently reported on Binney:

“At least 80% of fibre-optic cables globally go via the US. This is no accident and allows the US to view all communication coming in. At least 80% of all audio calls, not just metadata, are recorded and stored in the US. The NSA lies about what it stores..... The ultimate goal of the NSA is total population control... The NSA is mass-collecting on everyone, and it’s said to be about terrorism but inside the US it has stopped zero attacks.” [3]

The NSA will soon be able to collect 966 exabytes a year, the total of internet traffic annually. Former Google head Eric Schmidt once argued that the entire amount of knowledge from the beginning of humankind until 2003 amount to only five exabytes. [4]

As is usual, the ridiculous pseudo-philosophical question is raised in this kind of film comes to the fore – is Max Headroom “self-aware”? Here, to be “alive” has been replaced with a psychological and ambiguously loaded philosophical concept “self-aware,” instead of the classic idea of the soul. Individual man is no longer viewed as an embodiment of human nature with psyche, nous or mind, but as a single entity, a body, with mind or psyche being collapsed into body (mind is brain). With these presuppositions, it is only rational to conclude consciousness is purely a series of algorithms. Since fMRI scans can image the energy waves emanating from the brain, the brain is nothing more than these recorded sensory impressions, like an image on film.

Regular readers will immediately see the fallacy here, where once again the entire premise of all transhumanism and enlightenment mythology is the presupposition that “man” is a body with a blank slate video recorder (brain). If that’s all man is, then these electrical impulses can be mapped and put into an algorithm, and thus transferred to a hard drive. In logic, this is called the fallacy of composition, [5] wherein what is true in part is assumed to be the case for the whole. Since man’s mind does record experience like a computerized camera, well then man must just be a mobile computer camera. What this ignores and merely moves back a step is the perennial philosophical question Plato raised long ago – what is it you are referring to when you say “man”? For strictly empirical philosophy, there can be no universals. And yet the entire metaphysical superstructure of how it’s even possible to build a computer at all, the preconditions for a computer’s possible existence, are based on the diametrically opposite philosophies of Enlightenment empiricism, materialism and scientism. 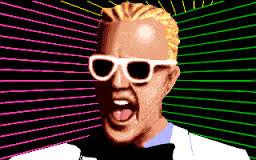 Just like Lucy, Transcendence wants viewers to think these are supremely deep questions that, instead of actually being based in reason or real science, fly off into the realm of absurd myth. Stop and consider for a moment how similar the fairy tale of a genie in a bottle is to the idea of Scarlett or Johnny being downloaded into a thumb drive. Put in this perspective, how laughable is it when worshipers at the scientistic cult altars mock us for being “superstitious”? Ultimately, the film doesn’t deserve a long, in-depth analysis, as the rest of the plot amounts to Caster erecting an underground super tech facility to build himself a new body. So, like Lucy, man achieves godhood and masters nature through nanotech. As one perceptive friend said of Lucy that equally applies here, “This is the kind of film stupid people think is ‘smart.'” Further, the bad guys are the backwards humans who are afraid of the dangers of technology – and they also have... guns! The good guys are the scientists who want to create a utopia. If we could just be evolved enough to get past guns and tribalism, why we could become gods! Yet do you really think all those underground supercomputers and all that nanotech wizardry is being developed to make everyone a god, as if it will be doled out in a government cheese line? Given the colossal lies the establishment foists upon the public daily, are you truly that stupid?

The only reason the film should be analyzed is because it is the first film completely taken up with the notion of transhumanism, aside from perhaps 2001. It is also very honest about its point – man creates his own god, since theology is nothing more than man making up deities. And it turns out in the storyline that the superbeing really was Dr. Caster (a point that had been doubted), because the great climax is that he recycled himself and his chick into a nanotech puddle, where they can both reside in their home garden. If it wasn’t a description of a film plot, readers would accuse me of being stoned in writing that, but one has to wonder – is Lucy just this same film redone? This time around, instead of being stuck in a stuffy plastic hard drive, you can download yourself into a puddle in a garden. It’s sooooo zen, maaaaaan. The real message here is the continued willingness of man to believe in utter lies and nonsense that flies in the face of the metalogic that undergirds man’s actual tech logic. And in denying metalogic, man ends with the conclusion that he is his own god in potentia, just waiting to come to perfect tech gnosis through which he can become the deus ex machina, and then irrationally dissolve into the Absolute. In conclusion, Transcendence is just the tired, age old pagan psychodrama retold over and over, like the meaningless cyclical metaphysic that forms its narrative foundation.