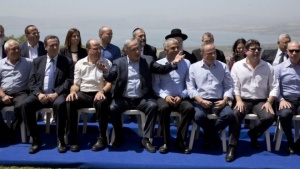 Exporting Golan oil is problematic under international law but, were the US to unilaterally recognise the Golan as Israel’s, that oil could potentially be exported to the US. Major US oil investors and lobbyists are therefore pushing hard for Trump to make that move.

While President Trump has reneged on many of his campaign promises — namely, those more populist and non-interventionist in nature — he has undeniably fulfilled those that appealed to his pro-Israel, Zionist supporters.

First, Trump announced late last year that his administration would officially recognise Jerusalem as the capital of Israel.[2] This move was then followed by his more recent decision to unilaterally remove the US from the Joint Comprehensive Plan of Action (JCPOA), better known as the Iran nuclear deal, which has long been criticised by Israel.[3]

Both moves were highly controversial and poorly received by many US allies, particularly European nations. They were also both orchestrated and promoted by Trump’s top donor, Zionist billionaire and casino mogul Sheldon Adelson, who donated $30 million to the Republican Party following Trump’s fulfillment of his two major pro-Israel promises.[4]

Adelson was also responsible for the removal of H.R. McMaster as National Security Adviser and his replacement with pro-Israel hawk and Adelson confidant John Bolton.[5]

However, recent statements made by Israeli government officials suggest that Trump’s work on behalf of pro-Israel hard-liners is only just beginning. According to an exclusive report published in Reuters, the Israeli government is now pushing the Trump administration to recognise Israeli sovereignty over the Golan Heights, a portion of Southern Syria that Israel has occupied since 1967 and annexed in 1981.[6]

International law still refuses to recognise the area as part of Israel, even though Israel has sent over 20,000 Jewish settlers to live in the area in order to permanently change the area’s ethnic-demographic composition, turning the native Druze population into a minority. Many of the Druze living in the occupied Golan have long complained of being routinely discriminated against under Israeli rule,[7] and continue to support the Syrian government.[8] In addition, the UN has accused Israel of “forcing citizenship” onto the group in a bid to increase its claim to sovereignty over the region. Israel hopes to add an additional 100,000 Jewish settlers to the area by 2020 in order to strengthen this claim.[9]

Israel’s Intelligence Minister, Israel Katz, told Reuters that Washington’s endorsement of Israel’s control of the Golan Heights was now “topping the agenda” in bilateral diplomatic talks between the two countries, and that such a move would likely come within a matter of months. Katz stated that US recognition of the Golan was being peddled to the Trump administration as a way to further counter Iran, which has now become the guiding force behind the US’ Middle East policy.

“This is the perfect time to make such a move. The most painful response you can give the Iranians is to recognise Israel’s Golan sovereignty — with an American statement, a presidential proclamation, enshrined [in law].”

Apparently, Israeli Prime Minister Binyamin Netanyahu has been pressing Trump on the issue since February of last year, when Netanyahu first met Trump at the White House. Now, Katz has claimed that those discussions have vastly expanded to involve various levels of the US administration as well as several Congressmen:

“I reckon there is great ripeness and a high probability this will happen […] give or take a few months,” Katz opined.

Katz may indeed have reason to be confident in an upcoming US move that would recognise the occupied Golan Heights as Israeli territory. Yet, while Katz has claimed that the motivation for such a move would benefit the US’ new and aggressive Iran policy, it is more likely to benefit an Israeli resource grab, as well as powerful Israeli and American oil interests.

A major factor behind Israel’s initial seizure and continued occupation of the Golan are its fresh water resources.[10] Indeed, the occupied Golan is one of three sources of fresh water to the Israeli state — and is the largest in size and most plentiful, as it comprises the mountain streams that feed Lake Kinneret (the Sea of Galilee) and the headwaters of the River Jordan.[11] This water is of major importance to Israel,[12] now in its fourth year of a drought so massive that a NASA study called it the worst drought in the region in nearly 900 years.[13]

Yet, the Golan’s importance to Israel grew immensely after massive oil reserves in the area were discovered in 2015.[14] Following that discovery, the Netanyahu-led government granted exclusive drilling rights to Afek, an Israeli subsidiary of New Jersey-based energy company Genie Energy.

As Mint Press News has previously reported, Genie Energy is backed by powerful interests in the US, such as former Treasury Secretary Larry Summers, former Vice President and Halliburton executive Dick Cheney, and former CIA Director James Woolsey. Powerful Zionist billionaires, such as Australian-born media mogul Rupert Murdoch and the UK’s Jacob Rothschild, are also connected to the company.[15]

Afek, Genie Energy’s subsidiary in the Golan, is run by a close friend of Netanyahu and former Knesset member Efraim “Effie” Eitam.

Eitam, who also previously served as minister of National Infrastructure as well as Housing and Construction, has repeatedly called to expel all Arabs from Israel, stating in 2006 that “we cannot be with all these Arabs and we cannot give up the land […] we will have to make another decision, to remove the Israeli Arabs from the political system.”[16] Eitam currently lives in Israel’s largest illegal settlement in the occupied Golan.

Genie Energy’s investments in the Golan are likely the strongest factor pushing the US towards the recognition of Israeli sovereignty over the occupied territory. Indeed, without a US move recognising Israel’s control over the region, Genie’s Israeli subsidiary will be unable to sell any oil it extracts from the occupied territory on the international oil market.

However, were the US to unilaterally recognise the Golan as Israel’s, that oil could potentially be exported to the US. Given that Genie’s contract to conduct exploratory drilling in the Golan Heights expires this year, its investors are in urgent need of a way to extract and sell the region’s oil – and a US decision on Israel’s claim to the Golan Heights could be just the answer to the company’s problems.