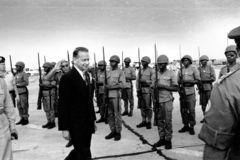 LONDON — After 56 years and many investigations, there is new hope that secrets lurking in Western intelligence archives could solve the biggest whodunnit in United Nations history: the mysterious death of Secretary-General Dag Hammarskjöld.

Whether the keepers of those archives will allow access remains an open question.

Mr Hammarskjöld, an iconic Swedish diplomat who was the second Secretary-General of the world body, died with 15 others when their plane, a chartered DC-6, crashed just after midnight on 18 September 1961, minutes from its destination: an airfield in Ndola, in what was then the British protectorate of Northern Rhodesia and is now Zambia.

The three official inquiries that immediately followed suggested pilot error was the cause, but the third of the reports, by the United Nations Commission of Investigation in 1962, said sabotage could not be ruled out. That possibility helped feed suspicions and conspiracy theories that Mr Hammarskjöld, 56 at the time of his death, had been assassinated.

Since then, independent investigators and academics have spent years collecting and scrutinizing evidence that had been dismissed or suppressed, bolstering the theory of foul play. In her 2011 book “Who Killed Hammarskjöld?,” Susan Williams, a University of London scholar of African decolonisation, concluded that “whatever the details, his death was almost certainly the result of a sinister intervention.”

A strong advocate of decolonisation, Mr Hammarskjöld certainly had adversaries who felt threatened by his diplomacy. He died while on a visit to help end a secessionist war in newly independent Congo, a former Belgian colony rich with strategically vital minerals, including uranium, coveted by the world’s big powers.

It was a mission regarded with suspicion by powerful mining interests in Belgium and South Africa, as well as permanent members of the UN Security Council, including the United States and Britain. Mr Hammarskjöld’s work later earned him a posthumous Nobel Peace Prize.

The narrative of his final hours has been one of enduring fascination, laced with cryptic references to shadowy mercenaries, big-power machinations, airplanes parked on darkened runways and distant monitors tracking radio communications as the DC-6 made its fatal, final approach.

The crash came at a pivot in Africa’s fortunes between colonialism and independence, heralding an era when the Cold War split the continent, fueling guerrilla wars and uprisings — from Mozambique and Zimbabwe to Angola and Namibia — that reached their conclusions more than three decades later with the end of apartheid in South Africa.

Frustrated that a definitive answer to what exactly happened to Mr Hammarskjöld’s plane had never been established, his two most recent successors in the top role at the United Nations — Ban Ki-moon and António Guterres — have revitalised the inquiry.

A panel appointed by Mr Ban found in 2015 that enough new tidbits of information had surfaced to warrant a new investigation. A General Assembly resolution last December authorised the appointment of an “eminent person” to review the information to determine the scope of any new inquiry.

That person, Mohamed Chande Othman, a former chief justice of Tanzania, who also was the leader of Mr Ban’s panel, is due to submit his findings in a report to Mr Guterres this month.

Mr Othman declined to speak about the findings ahead of submitting the report. But senior United Nations officials and other associates of Mr Othman said he had compiled detailed new questions about intercepted radio communications and other aircraft in the area as Mr Hammarskjöld's plane went down eight miles from Ndola’s airfield — and that the answers may be found in the intelligence archives of the United States, Britain and Belgium.

“We know from available information that they know much more than what they’re saying,” said one of the senior United Nations officials, referring to the government keepers of those archives. The official spoke on the condition of anonymity to discuss a confidential United Nations report.

One theory is that the DC-6 may have been attacked or harassed by a French-built Fouga Magister fighter jet operated by secessionist forces in the southern Congolese province of Katanga, who were resisting Mr Hammarskjöld’s efforts to end their rebellion.

Seven months before the crash, three Fouga Magisters had been delivered to the secessionists aboard an American-owned cargo plane that was supposed to be delivering food. President John F. Kennedy was deeply embarrassed by the delivery, which was later reported to have been a CIA operation.

Whether a Fouga was in the Ndola area on the night of the crash remains unknown, despite earlier assurances to Mr Othman from the CIA that it had no records of a fighter jet’s presence there, a senior United Nations official said.

Mr Othman has also put new questions to Britain and Belgium about the findings of their own intelligence services. Essentially, the senior United Nations official said, Mr Othman had asked Western governments to carry out “more exhaustive searches and comprehensive searches” through their archives.

His inquiries also include questions about two American military intelligence officials at different listening posts on the night of the crash, one of whom has since died. Both claimed years later to have overheard radio intercepts that suggested the DC-6 had been shot down. Mr Othman has also inquired about whether an official American DC-3 aircraft had been parked at the Ndola airfield that night.

As the deadline approached for Mr Othman to submit his report, it was unclear what kind of information, if any, the intelligence services of these countries had released in response to his requests.

Officials of the National Security Agency in the United States referred inquiries about Mr Othman to the US State Department, which had no immediate comment.

Britain’s Foreign Office said in a statement that “we conducted another search and are providing him with further material,” referring to Mr Othman. It did not specify the substance of the material but said “we believe all information of direct value to the inquiry has been released.”

There had been some hope that Belgium’s intelligence services would help Mr Othman after a member of the country’s Parliament, Benoit Hellings, publicly raised the issue with the Justice Ministry last year.

But Mr Hellings said in an interview that some of Belgium’s archives — particularly from its colonial secret service — remain classified. He has called for all of the archives to be made public as part of Belgium’s reckoning with its colonial past and said he intended to press the matter further.

The Belgium connection is potentially important because of unverified information that Belgian mercenaries had been operating in the Ndola area — including a Belgian pilot who may have been operating the secessionists’ Fouga Magister.

“I just want to know the truth, and when you have some archives, it’s normal to give access to people from the science world, and especially from the UN,” Mr Hellings said. “We are talking about the death of a Secretary-General, so it’s a fairly important topic.”

Mr Othman also reached out to Goran Bjorkdahl, a Swedish aid worker and development expert based in Africa, who had conducted his own investigation from 2008 to 2011 after learning that his father, who was in Zambia in the 1970s, had been given a fragment of Mr Hammarskjöld’s wrecked aircraft by local villagers.

The investigation by Mr Bjorkdahl suggested the plane had been shot down as it was approaching Ndola. That conclusion was based on interviews he conducted with residents of the Ndola area, who said they had seen a second smaller aircraft, but had never been asked to provide testimony for any official inquiry.

New versions of what happened that night and additional allegations in the Hammarskjöld mystery, many of them uncorroborated, have continued to emerge, further complicating Mr Othman’s effort to sift fact from fiction.

Tom Miller, an American journalist based in Arizona, said he had provided Mr Othman access to notes he had made after a series of meetings, the last in 1975, with a British mercenary who described what he called a CIA-backed conspiracy to ensure that Mr Hammarskjöld’s plane crashed by falsifying altitudes on the crew’s aviation charts, causing the pilot to fly much too low.

The two official inquiries by the Rhodesian civil aviation authorities immediately after the crash found that the plane had descended too low. The United Nations Commission of Inquiry report found the plane crashed in an area just 200 feet higher than the Ndola airfield’s altitude.

Any aircraft eight miles from its destination should have been on a final descent trajectory at a much higher altitude than 200 feet.

To skeptics of the official accounts, the apparent reluctance by the big powers to share all they know with Mr Othman is inexplicable, suggesting they are hoping for interest in the case to fade away.

David Wardrop, the chairman of the United Nations Association Westminster Branch, a group in London that has supported further inquiry into Mr Hammarskjöld’s death, said the responses by Britain and the United States appeared to show they had decided that “slothfulness is the best way to exhaust the UN’s process.”