Provenance of the report: It was produced by British law firm Carter-Ruck on behalf of Qatar who funded it (CNN). Carter-Ruck had in the past defended Saudis suspected of funding Al Qaeda.

ABC's "U.S.: Saudis Still Filling Al Qaeda’s Coffers," [1]would report that Yasin al Qadi was being represented by Carter-Ruck against US charges filed just after 9/11 claiming he was financing Al Qaeda. It should also be noted that Yasin al Qadi is a close ally of US' partner in the Syrian conflict, Recep Tayyip Erdoğan of Turkey. The suspicious report, conveniently released just a day before the Geneva conference, emerging from a tangled web of state-sponsored terrorism and dubious Western law firms only further taints the West's image as they go into "peace talks" regarding Syria.

JAs with every Western-backed conference assembled regarding Syria, dramtic fabrications revealed just ahead of proceedings are intended to give them and their predetermined outcomes both gravity and "urgency." Upcoming "peace talks" to be held in Switzerland are no exception. A report cooked up by the unelected dictatorship in Qatar is based on an anonymous source, codename "Caesar," and remains admittedly unverified.

The BBC's report, "US and UN express horror at Syria torture report," claims:

The report, by three former war crimes prosecutors, is based on the evidence of a defected military police photographer, referred to only as Caesar, who along with others reportedly smuggled about 55,000 digital images of some 11,000 dead detainees out of Syria. [2]

The BBC then reveals the propaganda value the report is intended to serve in upcoming talks by stating:

US state department spokeswoman Marie Harf said it "underscores that it makes it even more important that we make progress [at Geneva II]. The situation on the ground is so horrific that we need to get a political transition in place, and we need to get the Assad regime out of power." [2]

Rupert Colville, spokesman for UN human rights chief Navi Pillay, told AFP: "This report is extremely alarming, and the alleged scale of the deaths in detention, if verified, is truly horrifying. 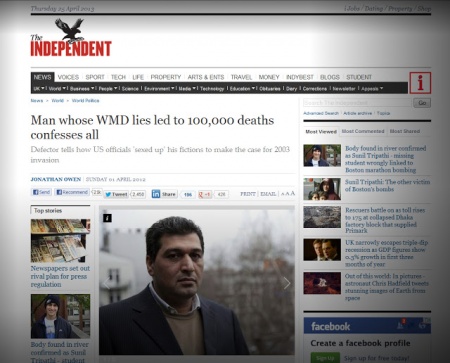 From Independent's "Man whose WMD lies led to 100,000 deaths confesses all: Defector tells how US officials 'sexed up' his fictions to make the case for 2003 invasion." [3]In retrospect, the corporate-media has no problem admitting the insidious lies that were told to justify the invasion and occupation of Iraq - the lead up to the war was another story. A verbatim repeat of these admitted lies are being directed at Syria amidst the West's failure to overthrow the government with terrorist proxies. [4]

Readers must recall another codename, that of Iraqi informant 'Curveball' whose lies would lay the rhetorical foundation for the invasion and occupation of Iraq. The UK Independent's article, "Man whose WMD lies led to 100,000 deaths confesses all," would recall:

“A man whose lies helped to make the case for invading Iraq – starting a nine-year war costing more than 100,000 lives and hundreds of billions of pounds – will come clean in his first British television interview tomorrow. "Curveball", the Iraqi defector who fabricated claims about Iraq's weapons of mass destruction, smiles as he confirms how he made the whole thing up. It was a confidence trick that changed the course of history, with Rafid Ahmed Alwan al-Janabi's lies used to justify the Iraq war.”
' [5]

And once again, a disingenuous West along with a complicit UN is going into a so-called "peace conference" with unverified allegations designed to manipulate public perception on the most visceral levels, circumventing facts, logic, and reason, to bolster their position in a conflict they themselves engineered and are still purposefully perpetrating with the hopes of achieving long-desired "regime change."

The ongoing conflict in Syria was engineered by the West and its regional allies as far back as 2007, revealed by Pulitzer Prize-winning journalist Seymour Hersh in his article, "The Redirection: Is the Administration's new policy benefiting our enemies in the war on terrorism?" which prophetically stated (emphasis added):

To undermine Iran, which is predominantly Shiite, the Bush Administration has decided, in effect, to reconfigure its priorities in the Middle East. In Lebanon, the Administration has cooperated with Saudi Arabia’s government, which is Sunni, in clandestine operations that are intended to weaken Hezbollah, the Shiite organization that is backed by Iran. The U.S. has also taken part in clandestine operations aimed at Iran and its ally Syria. A by-product of these activities has been the bolstering of Sunni extremist groups that espouse a militant vision of Islam and are hostile to America and sympathetic to Al Qaeda. [6]

It is now admitted that Al Qaeda comprises almost entirely all of the militants fighting the Syrian government, many of whom are foreigners crossing into Syrian territory with NATO's aid. [7]