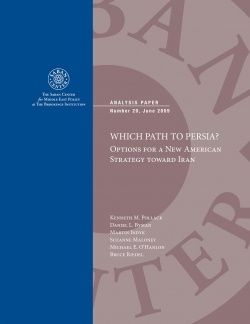 As at early September 2013, wide dissemination - and understanding - of the information contained in this article is vital if US military intervention in Syria is to be avoided. Anyone with an open mind and who takes the trouble to read it, together with it's referenced material thoroughly, cannot but conclude that we have been lied to - and continue to be lied to - with a planned and systematic thoroughness that is breathtaking in its scope and Machiavellian purpose.

As is the case whenever the newly polished concepts of "Responsibility to Protect" and "Humanitarian intervention" are invoked by the Globalist Elite, they are used (and hitherto have proved very effective) to herd and dupe gullible publics into support for the unconscionable destruction of countries and their governments that are guilty of nothing but declining to see things the Globalist's way.

It is truly depressing to have to acknowledge that we appear to have learned absolutely nothing from carnage of Irag, Afghanistan and Libya, Pakistan, Yemen - to mention just a few of the latest and current US/Western executed 'Humanitarian' Drone and bombing campaigns. We have become accustomed to the language or Orwell - where everything becomes its opposite and no one seems to notice.
See Also

US Planned Syrian Civilian Catastrophe Since 2007

But, while the UN and nations across the West feign shock over the growing humanitarian catastrophe unfolding in and around Syria, the goal of a violent sectarian conflict and its predictable, catastrophic results along with calls to literally "bleed" Syria have been the underlying strategy of special interests in the United States, Israel, Saudi Arabia and their regional partners since at least 2007. [Plus the UK and France Ed]

A Timeline: How the Syrian Conflict Really Unfolded

Western media networks have ensured that a singular narrative of "pro-democracy" uprisings turning violent in the face of brutal oppression by the Syrian government after the so-called "Arab Spring" is disseminated across the public. In reality, "pro-democracy" protesters served as a tenuous smokescreen behind which armed foreign-backed extremists took to the streets and countrysides of Syria to execute a sectarian bloodbath years in the making. Here is a timeline that illuminates the true cause of Syria's current conflict and the foreign interests, not the Syrian government, responsible for the tens of thousands dead and millions displaced during the conflict. 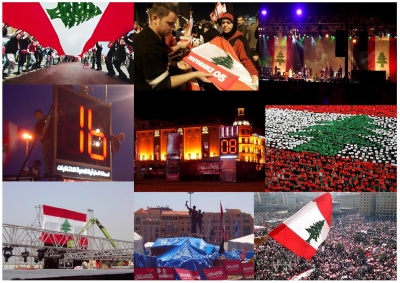 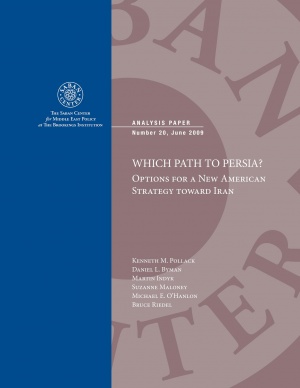 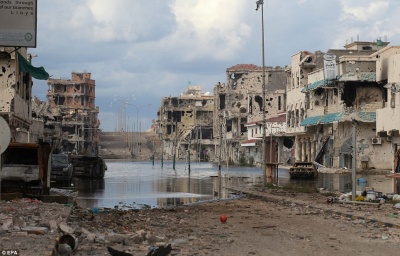 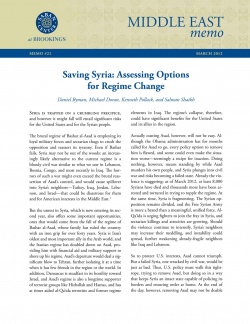 Brookings Institution's Middle East Memo #21 "Assessing Options for Regime Change (File:Brookings Memo 21.pdf makes no secret that the humanitarian "responsibility to protect" is but a pretext for long-planned regime change.

And, just this year, it was revealed that despite the West's feigned military and political paralysis regarding the Syrian conflict, the US and Great Britain have been covertly funding and arming sectarian extremists to the tune of billions of dollars and arming them with literally thousands of tons of weaponry. [27] Despite claims of "carefully vetting" "moderate" militant factions, the prominence of Al Qaeda-linked extremist groups indicates that the majority of Western support, laundered through Qatar and Saudi Arabia, is being purposefully put into the hands of the very sectarian extremists identified in Seymour Hersh's 2007 article, "The Redirection."

US Created and is Now Using Syrian Catastrophe to Justify Intervention

The non-debate taking place now to justify US military intervention in a conflict they themselves started and have intentionally perpetuated, is whether chemical weapons were used in Damascus on August 21, 2013 - not even "who" deployed them. The weakness of the US' argument has seen an unprecedented backlash across both the world's populations and the global diplomatic community. And despite only 9% of the American public supporting a military intervention in Syria, Congress appears poised to not only green-light "limited strikes," but may approve of a wider military escalation.

In Seymour Hersh's 2007 New Yorker article, "The Redirection," Robert Baer, a former CIA agent in Lebanon, warned of the sectarian bloodbath the US, Israel, and Saudi Arabia were planning to unleash. He stated:

“we’ve got Sunni Arabs preparing for cataclysmic conflict, and we will need somebody to protect the Christians in Lebanon. It used to be the French and the United States who would do it, and now it’s going to be Nasrallah and the Shiites"

Hezbollah's leader, Hassan Nasrallah, also featured in Hersh's report, would in turn also warn of an imminent and spreading sectarian war purposefully stoked by the West:

“Nasrallah said he believed that President Bush’s goal was “the drawing of a new map for the region. They want the partition of Iraq. Iraq is not on the edge of a civil war — there is a civil war. There is ethnic and sectarian cleansing. The daily killing and displacement which is taking place in Iraq aims at achieving three Iraqi parts, which will be sectarian and ethnically pure as a prelude to the partition of Iraq. Within one or two years at the most, there will be total Sunni areas, total Shiite areas, and total Kurdish areas. Even in Baghdad, there is a fear that it might be divided into two areas, one Sunni and one Shiite...

“I can say that President Bush is lying when he says he does not want Iraq to be partitioned. All the facts occurring now on the ground make you swear he is dragging Iraq to partition. And a day will come when he will say, ‘I cannot do anything, since the Iraqis want the partition of their country and I honor the wishes of the people of Iraq.’"

Nasrallah said he believed that America also wanted to bring about the partition of Lebanon and of Syria. In Syria, he said, the result would be to push the country “into chaos and internal battles like in Iraq.” In Lebanon, “There will be a Sunni state, an Alawi state, a Christian state, and a Druze state.” But, he said, “I do not know if there will be a Shiite state.””
' [28]

It would be difficult for anyone to look across the scarred landscape of today's Syria and not see that this horrific conspiracy was realized in full. The Western media is now acquainting the public with the possibility of a partitioned Syria, [29] echoing the warnings of Nasrallah years ago. (See Also: Document:Arabs Beware the Small States Option Ed) The goals of a US military strike would be to "degrade" the capabilities of the Syrian government, while bolstering the terrorist legions still operating within and along Syria's borders.

What we are witnessing in Syria today is the direct result of a documented conspiracy, not by a "brutal Syrian regime" "oppressing" its own people, but of a US, Israel, and Saudi Arabia radicalizing, arming, and unleashing a sectarian tidal wave they knew well ahead of time would cause atrocities, genocide, mass displacements and even the geopolitical partitioning of Syria and beyond. The intentional destabilization of the region is meant to weaken Lebanon, Syria, Iran, and Iraq - and even Saudi Arabia, Qatar, Jordan, and others - to accomplish what the depleted, impotent US and Israeli forces could not achieve. Military intervention now seeks to tip the balance of an already teetering region.

The attacks on Syria are not humanitarian by any measure. They are simply the latest stage of a long-running plan to divide and destroy the region, leaving the West the sole regional hegemonic power.