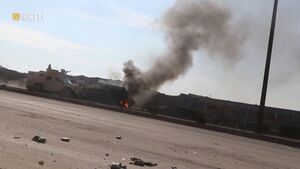 The Pentagon’s proxy ground force in Syria, the Syrian Democratic Forces (SDF) militia, claimed to have retaken a jail in the northeastern city of Hasaka on 26 January 2022 following a week-long siege that saw extensive US bombing and the deployment of hundreds of American troops.[1]

In announcing their purported victory, neither the predominantly Kurdish SDF nor their controllers in the US military offered any information on the fate of between 700 and 850 children held at the detention facility together with alleged supporters of the Islamic State (ISIS).[2]

Reports from the city indicated that hundreds were killed in the fighting, which began last Thursday after ISIS fighters seized control of the prison following an inmate riot and the demolishing of its gates with explosive-rigged vehicles. Many more have been wounded, and thousands of families were forced to flee the fighting and the US bombing raids carried out against urban neighborhoods.

The World Health Organization reported that as many as 5,000 families had fled their homes under bitter winter conditions to government-held areas.

Syria’s state media agency Sana quoted the country’s Foreign Ministry as denouncing the actions of the US and its puppet Kurdish-led militia as tantamount to “war crimes.” It demanded the immediate withdrawal of both US troops from northeastern Syria and the Turkish military from the northwest of the country.[3]

Sana reported Wednesday that SDF forces had brought in heavy equipment to demolish at least 10 houses in the Ghweiran neighbourhood of Hasaka city near the prison, while airstrikes by Apache attack helicopters and other US warplanes demolished other homes and public buildings.

Approximately 200 US troops were reportedly deployed in the fighting, backed by American tanks and Bradley fighting vehicles.

The aid agency Save the Children said it had received reports that children were among the hundreds killed and wounded in the siege. The SDF had charged that ISIS fighters were using the child detainees as “human shields,” a time-worn alibi of the Pentagon for the slaughter of unarmed civilians.

Letta Tayler, from Human Rights Watch, told the Washington Post that she had spoken directly to inmates from Canada and Australia during the siege. “They sound desperate,” she said. “They say they’ve had no food or water for days; describe dead and wounded everywhere.”

A similar account was provided by a 17-year-old boy from Australia, who was able to send out messages to his family. “There’s a lot of people dead in front of me, I’m scared I might die any time because I’m bleeding, please help me,” he said.

His voice notes to his family, obtained by the Telegraph, continued: “I’ve seen a lot of bodies of kids, eight years, 10 years, 12 years. My friends got killed here. I’m by myself, I’m very scared, there’s a lot of people dead, a lot of people injured … People are screaming next to me, people are scared. I really need help, I really want to come back home. Please help me.” The boy said he had been wounded in the head and the hand during a US Apache helicopter attack on the prison.

This grossly disproportionate armed violence—the use of Apache helicopters and heavy bombardments to pursue fugitive prisoners—is of a piece with the entire criminal enterprise carried out by US imperialism in Syria under the pretext of combatting ISIS.

The scope of these crimes has been partially uncovered with publication of the so-called “Civilian Casualty Files” obtained by Azmat Khan, an assistant professor at the Columbia Graduate School of Journalism, exposing the killing of thousands of civilians in US airstrikes and the systematic coverups conducted by the Pentagon.

Among the latest of these revelations, published in the New York Times last week, concerns a March 2017 Special Operations bombing of a Syrian dam on the Euphrates River in eastern Syria, which had been on a Pentagon “no-strike list.” Only the failure of a “bunker-buster” bomb to explode and the desperate intervention of Syrian engineers prevented the collapse of the dam, which would have unleashed a wall of water killing tens of thousands downstream. Workers involved in this rescue effort were then assassinated in a follow-up drone strike.

The siege of the Hasaka detention centre has called attention to the barbaric treatment meted out by Washington and its local allies to thousands of men, women and children who survived the massive bombing campaign unleashed by the US military to crush the last ISIS strongholds in Syria in 2019.

A report issued last May by the United Nations human rights office condemned the “traumatic” and illegal culling of boys over the age of 12—and some younger—from their mothers and their imprisonment at the Hasaka facility under conditions that the UN defined as tantamount to torture.

The report added: “Malnourishment is rife. Boys held in these facilities suffer from scabies and other skin conditions, they are vulnerable to HIV, Tuberculosis and COVID-19 exposure. Boys in these detention facilities endure untreated war injuries, missing limbs, and severe trauma. These conditions meet the threshold for torture, inhuman and degrading treatment under international law, and no child should have to endure them.”

The report also indicted the governments of Western Europe, the United States and Australia, which have rejected all appeals for the repatriation of their citizens, including the child prisoners who were brought to Syria by their parents.

In addition to the child prisoners at the Hasaka detention facility, tens of thousands of others captured during the US-led war are held elsewhere in make-shift jails in Syria, while an estimated 60,000 women and children are held in squalid camps, suffering from hunger, disease and routine violence.

The US has approximately 900 Special Operations troops deployed in northeastern Syria, with supplementary forces brought in periodically from among the 30,000 US military personnel based throughout the Middle East. Under an order issued by the Trump administration and continued under Biden, these troops have seized control of key Syrian oil fields, where crude is being pumped out under barrels of guns and then shipped via military convoys into neighbouring Iraq. The principal aim of this theft—itself a war crime—is to deny the Assad government critical resources needed for Syria’s recovery from more than a decade of war.

Washington is continuing its illegal occupation of Syria not to combat ISIS—its own Frankenstein’s monster—or “terrorism,” but to counter the influence of Russia and Iran, which provided crucial military support to the Syrian government of President Bashar al-Assad against US-backed Islamist militias, and China, which is cementing economic ties with Damascus.

It is more than a coincidence that the eruption of the biggest US military operations in Syria since 2019 coincided with the rabidly aggressive war provocations against Russia over Ukraine. Moreover, they follow by barely a week the signing of an agreement between Damascus and Beijing to incorporate Syria into China’s Belt and Road Initiative.

Even as it shifts the focus of US militarism toward the preparation of war with Russia and China, Washington continues its strategic aim of asserting US imperialist hegemony over the oil-rich Middle East.

This finds expression in not only the fighting in Syria, but also the turn toward greater US involvement in the near-genocidal Saudi-led war in Yemen, which, according to UN estimates, had killed upwards of 377,000 people, both directly and indirectly, by the end of 2021.

The Pentagon revealed that its forces participated Monday in the defence of the United Arab Emirates against a missile attack in retaliation for a Saudi bombing raid against a prison that killed nearly 100 and wounded hundreds more last week. The UAE joined Saudi Arabia in the bloody onslaught launched in 2015 with the aim of suppressing Yemen’s Houthi rebels and installing a puppet regime controlled by Riyadh.

The Biden administration recently approved a $650 million sale of missiles to Saudi Arabia—like the Raytheon-made weapon used in last week’s massacre—while signing off on a $24 billion arms package for the UAE.

Meanwhile, Biden has signalled that he may reimpose the US designation of the Houthi rebels as a terrorist organisation, a move that has bipartisan support in the US Congress. The effect would be to further starve the majority of Yemenis living in Houthi-controlled areas, triggering a mass famine that could kill millions.