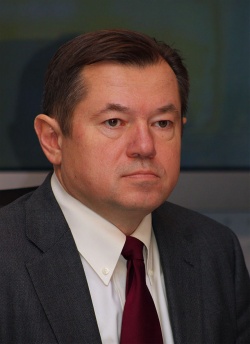 Translated from Russian by New Insight
Note: A round table discussion sponsored by RIA Novosti which took place in Moscow on 10 June 2014. Sub-headings added by Wikispooks to aid with readability and citation

Wikispooks Comment Sergei Glazyev is an important figure in the power structures of Russia. His words should not be taken lightly and must surely have had the prior approval of Putin. He could not be clearer about who is orchestrating events in Ukraine. The function of Ukrainian Junta president Poroshenko, together with his prime minister Yatsenyuk and the entire Junta government is simply defined: They are translators of Anglo-US instructions into Ukrainian.

Regarding the policies of Kiev, let me say this: Kiev is clearly conducting a policy of genocide to eliminate the whole population of Donbass. They are unashamedly destroying the social infrastructure. They've smashed Europe's finest airport without batting a eyelid.

Aside from the monstrous number of victims, this was a gigantic infrastructure project, the pride of Donbass. They're destroying hospitals, kindergartens, schools, The fate they're preparing for the people of Donbass is serfdom, which they make no secret of. Just listen to the statements made by Kiev's chief ideologists, such as Liashko. Poroshenko's position is not significantly different. They see Donbass purely as a source of income, a place to pump out profits from, by horrific exploitation of the people. As it is, the population is already being exploited brutally: wages are low - and paid in envelopes, the pension funds are bankrupt, safety conditions for the workers are worse than in the last century. It's a merciless exploitation of the people.

Conditions are being established to make people leave the place. Those who are not tied to work in the factories and mines are being driven out. They are the refugees whom we are receiving in our country today. The Kiev authorities are brutally destroying the social infrastructure of Donbass. They're not interested in the region's manufacturing and science potential. So they have no sympathy for the engineering industry there, which is closely integrated into the Russian industrial complex and otherwise would cease to exist. It's obvious that the United States is fully controlling the Kiev Nazis, Poroshenko personally, and the government, and is pushing them to pursue this war against Donbass to the very end. I disagree with Feodor, who said there is some kind of limit. They have no limits. They've already deployed Grad rocket launchers. Tymoshenko has threatened to nuke them. This is not simply an expression of emotion. It has triggered a certain reaction from the Nazis. If they had a neutron bomb, they probably would have used it already on Slaviansk. I have no doubt about that. They are using all means at their disposal and will wage this war until the resistance in Donbass is completely eliminated.

US is orchestrating the war

Why? Because this is a war by the United States against us. They are pushing the war, providing the weapons and finance, and directing the campaign. I agree with Mihail Remizov: time is on the side of the Nazis, strangely enough. On the one hand we're anticipating the collapse of the regime from the wreckage of the insurmountable socio-economic problems.But in Georgia that didn't happen. By a huge effort they managed to get rid of Saakashvili. But that wasn't brought about by a rebellion in society. It happened by democratic processes, which in Ukraine is already an impossibility.

Time is NOT on Russia's side

Why is time not on our side? To be more exact, not on the side of Donbass. The Americans, and their puppets in Kiev, have set a course of militarization of Ukraine, construction of a Nazi dictatorship, _ total _ mobilization of the population against Russia. Although the population is not currently very enthusiastic about the mobilization, consider the dynamics: In December (2013) there were 2,000 Nazis in Kiev. By February there were 20,000 armed Nazis. By May the number was 50,000, along with the new army recruits. During the summer it will reach 100,000. In September there will be 200,000. We're talking about the plans for the call-up of people of military age. By the end of the year they will have half a million armed people at their disposal. Their military equipment is being brought out from storage. Ukraine possesses a large army, which had been removed from operation. But the Kharkov industries are now working at full capacity, restoring tanks and armor. Bringing these tanks out of storage, resurrecting and modernizing them is really not difficult. 200 armored vehicles are engaged in the war. The number is increasing every day. The same is happening with their aviation, which is being brought out of storage in Odessa.

What Russia will face

So what will we face?

A very powerful military machine targeting us, fired up by Nazis, ideologically indoctrinated against Russia, who will push the army into war, then block them from behind to prevent retreat. Their goal is a war against Russia – that's not something we can just sit out. Having lost Donbass, we will also lose the peace. The next target they will declare is Crimea. I'm not joking.

Ukraine will be pushed brutally, resolutely and across the board into a war against Russia on the pretext of Crimea. Poroshenko has stated officially that his intention is war against Russia. How else would they get Crimea back. Nuland said very clearly in Odessa that they expect their Ukrainian agents to go to war against Russia for Crimea. This armada of half a million people will invade Crimea. There is no doubt.

In conclusion, let me remind you of the words of Churchill:

“You were given the choice between war and dishonour. You chose dishonour and you will have war.”

We're talking about a modern war, which doesn't mean that our tanks have to roll into Kiev. But we have the right under international law to at least stop the genocide. All that is needed is to close the airspace, and use the same mechanisms to shut down the heavy weapons which are being used against the population, as the Americans themselves did in Libya: They closed the airspace, then fired at their armored vehicles, artillery and aviation. As a result the regime they were fighting against was unable to engage in battle. We still have the chance to do that. Half a year from now that chance will be gone.

Lugansk and Donetsk have established parliaments and authorities uniting the two republics. Kiev's unwillingness to negotiate with them is a result of their having no independence: they are in reality subordinated to the United States. Therefore it's very important that we identify Ukraine as an occupied territory of the US, except for Donbass, which is resisting.

Necessity to use the correct terminology

Once we start using the correct terms and frame of reference, then it will be clear what we need to do.

If Ukraine is occupied by the United States and their mercenaries, who are manipulating their marionette regime to hold the population at gun-point and make them fight against Russia, to unleash firstly a civil war and later a world war, dragging in Europe too, and ultimately all of Eurasia, then it's very important to determine the correct terminology. We're encouraging other regions not only to join the federation but to liberate themselves from occupation, and to find the courage to take the kind of steps as has been done in Donbass.

Kiev Junta is essentially a network of American agents

Let's be clear again about our frame of reference: The Kiev leadership is not independent. Essentially they are a network of American agents – American puppets. Poroshenko didn't win the presidential election. Experts have computed that not more than 40% voted for him. How this farce of an "election" was orchestrated is another discussion. The territory of Ukraine is under occupation and control by the United States. There is tons of evidence. The Americans have legalized the stationing of their military instructors there. SBU is fully under the control of the CIA. It's an occupied territory of the Americans. So we need to talk about their illegal occupation of the territory and its liberation, and how they're using the mass media to drive up the Nazi hysteria, by which the Americans will unleash the 4th world war, considering that the 3rd world war was the cold war against the Soviet Union.

I invite you in our next discussion to highlight the reasons for this war, why the US has been cultivating Ukrainian Nazism and is now unleashing it against Russia, why they launched this war in Ukraine as a pretext to pull Russia into a direct military confrontation with Ukrainian armed forces, in order to create a regional war in Europe, and after that what is essentially the fourth world war. This aggression is directed not only against Russia. In the first instance the objective is Europe. The Americans have gained from every war in Europe – the first world war, the second world war, the cold war. The wars in Europe are the means of their economic miracle, their own prosperity.

It's also a war against China

Now Japan and Korea are being pulled into the arms race. The missile defense systems will be modernized and upgraded in Japan and on the Korean peninsula, the Americans have announced. This is directed at both Russia and China. So we have to understand that the key to resolving the catastrophe of Ukraine is to be found in Washington. That's where Nazism has to be defeated.﻿