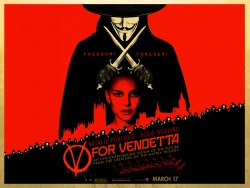 Image right: V for Vendetta promotional poster - "Let me take a little off the top"

At first, I was going to engage in a lengthy, protracted analysis of the symbols and imagery of V for Vendetta, but I have changed my mind. While it does contain a good bit of esoteric imagery and significant depth beyond most Hollywood trash, the meaning and purpose of the film is much simpler. The film is based on the famous graphic novel by ritual magician and Crowley adept, Alan Moore. While Moore is a talented artist and storyteller, the notion that his story is geared towards human liberation, as masses of ignorant fans assume, is laughable. Fans and reviews offer a wide array of online speculation as to its meaning and imagery, but few will be able to decode it without understanding the ritual element, which I so often highlight.

V for Vendetta is a manifestation of sophisticated managed dialectics and ritual psychodrama that deludes the rebellious young pop mind into thinking it is part of an anti-establishment “V Mask” movement, known as anarchism. True Satanism is anarchic, and certainly given the ridiculous, backwards “civilization” we live in, this is understandable. Yet the solution to three hundred years of “revolutions” and full spectrum subversion can in no way be more of the same. My friend Mark Hackard has highlighted this in his recent essay translation on monarchism and republicanism/democracy, [1] and I commend readers to consider its import. Political solutions are understandable, given that we are weary of past engineered attempts that ended in miserable failure – communism, fascism, and now world socialism/egalitarianism. But the other option – anarchism, is no different, as it has the same starting point – universal human egalitarianism. Ironically, anarchists tend to be the most elitist after a few years, recognizing their fellow cell members are dupes of larger foundation-run interests. 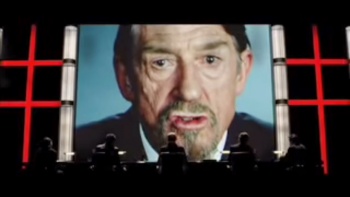 I do have a soft spot for anarchism, due to it being the ultimate high point of the left – they are the most likely to realize the vacuous nature of modernity. Yet anarchism is a worldview of ultimate atomism, where the individual reigns supreme in a meaningless universe of self-imposed meaning. This atomized, pseudo-ubermensch mentality is generally short-lived, as the entirety of one’s experience soon comes in to dispel this teenagey, mytholological fantasy worldview. Anarchism is the worldview par excellence of the elite, as it is the most destructive. Anarchism is chaos magick, intent on releasing the forces of destruction under a self-deluded belief in engineering a mass “dark night of the soul” to create the “New Man.” It is the final manifestation of the revolutionary faith 1789 and 1776 began. As an occultist, [2] Moore is well aware of the effect such semiotic acts of aesthetic terror can have. How quickly the intellectual leftist revolutionary realizes his comrades are morons, and then purges them. Anarchism is therefore the fullest manifestation of Jacobin “lady liberty” living. Yet Jacobin lady liberty living leads to self-destruction when taken to its fullest. The chaos unleashed upon society comes home to roost in the lives of the “revolutionaries.”

So this is the real masonic mystagogy of V for Vendetta: V is Satan, as the graphic novel even states. V initiates Evey, as a new Eve, into the cult of liberty. V utilizes all the same mind control techniques and torture the system uses to “free” Evey. This is why Evey is “locked up” and has her head shaved, as we have seen with many Hollywood brainwashed starlets. The cult of liberty is a harsh master, however, as absolute liberty is really absolute slavery to the passions. Meanwhile the establishment in the film and novel is a far right establishment which persecutes homosexuality and tries to enforce Christianity as a state religion in the UK. This is utterly laughable, except in the sense that the neo-conservative establishment in the US does wear a thin veneer of evangelical covering. However, that is quickly wearing thin, and as the film is set in the near future where the US has collapsed and the UK is under a theocracy, its thesis is absurd. As with other Wachowski films like The Matrix or Cloud Atlas, the message conveyed is that all law is slavery – even that of gender. To be male or heterosexual is to be a slave to imposed social constructs, not to the fulfillment of natural order. This transformation process is symbolized by Evey being shown with butterflies following her mind control torture. 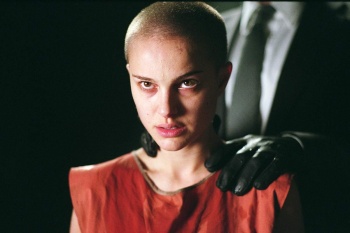 From this perspective, we can also gain insight into the staged bio-release theme. The plot revolves around a pharmaceutical establishment and political elite that have staged a bio-release to gain political power. This aspect of the film does have contemporary esoteric significance, as that is what we are presently seeing in the US with the hyped Ebola fear. As Jon Rappoport has shown, [3] the tests for Ebola are themselves questionable at the least, and speak to older managed crises like AIDS and H1N1 that never delivered on their presaged apocalyptic doom. However, don’t put it past the establishment to release a real bio-attack! While that is yet to come, my analysis of the present Ebola crisis is that it is not what it is said to be, but rather, a cover for AFRICOM intervention as the hilarious Kony propaganda was. [4] And to further add to this point, Webster Tarpley has a reasonable thesis in his Synthetic Terror that Guy Fawkes himself was an agent of British intelligence who ran a false flag to frame Catholics as “terrorists.” V, then, as Satan, is merely a ruse of managed anti-establishment rebellion that plays into the hands of the establishment like putty. Prompting the V Mask wearing rebels in the populace to engage in terror acts only fuels the establishment’s designs. Therefore, for V for Vendetta, I’m avoiding all the symbolism and esoterica and looking at the main point – managed, Hegelian dialectical faux rebellion. So put your mask on and grab your Dawkins and your comic books, the revolution will be televised! V is Hot Topic mall rebellion.

“There is no proletarian, not even a Communist movement, that has not operated in the interests of money, and for the time being permitted by money – and that without the idealists among its leaders having the slightest suspicion of the fact.” 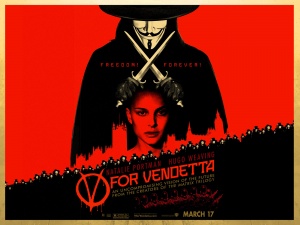