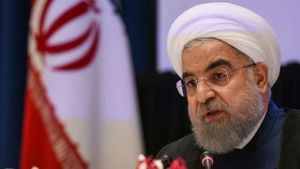 ★ Start a Discussion about this document
Venezuela, Iran: Trump And The Deep State

The new deal of the White House and the Pentagon

The parliamentary elections of 6 November 2018 deprived President Trump of his majority in the House of Representatives. The Democratic Party assumed that this would lead inevitably to his destitution.

Of course, he had done nothing to deserve it, but a flood of hysteria swamped the two camps of the United States, exactly as it had during the Civil War. For the last two years, the partisans of economic globalisation had been pursuing the Russian trail, waiting for Prosecutor Robert Mueller to prove President Trump’s ’’high treason’’.

Robert Mueller has always given priority to the interests of the federal state over Truth and Law. During the Lockerbie attack, it was Mueller who invented the Libyan trail on the basis of ’’proof’’’ which was later invalidated by Scottish Justice.[1] It was Mueller, after the attacks of 11 September 2001, who claimed that three planes had been hijacked by 19 terrorists, none of whose names figured on the embarkation lists.[2] His conclusions concerning the Russian enquiry were known before the investigation had begun.

Donald Trump therefore negotiated his political survival with the deep state.[3] He had no choice. It was agreed that the Rumsfeld/Cebrowski plan would be implemented on the condition that it would not drag the nation into a major war.[4] In exchange, Prosecutor Robert Mueller changed sides and declared President Trump innocent of treason.

While they were at it, the hawks seized the opportunity to impose the return of the neoconservatives. This New York Trotskyist groupuscule, built around the American Jewish Committee (AJC), had originally been recruited by Ronald Reagan. It transformed the ideal of a « world revolution » into that of « world US imperialism ». Since that time, it has participated in all US administrations, one day Republican, the next day Democrat, according to the political leanings of the President in power. The only exception to that rule so far has been the Trump administration, which, however, did not exclude it from its reserved agencies, the NED (National Endowment for Democracy) and the USIP (United States Institute of Peace).

So, on 25 January 2019, the Venezuelan dossier was handed to Elliott Abrams at the US State Department. Abram’s name has been associated with all manner of lies and manipulations by the US state.[5] He was one of the architects of the Iran-Contra operation in 1981-85, and the war against Iraq in 2003. As soon as he was nominated, he began working with the US military Command for South America (SouthCom) to overthrow elected President Nicolás Maduro.

It so happens that we are familiar with both the Rumsfeld/Cebrowski strategy – whose deployment in the Greater Middle East we witnessed for fifteen years – and the command structure of SouthCom,[6] drawn up on 23 February 2018 by Admiral Kurt Tidd, and revealed by Stella Calloni last May.[7] What is happening today is clearly an application of the plan.

The failure of the US operation, with the discovery of the betrayal of the director of SEBIN, General Manuel Figuera, and the coup d’état that he improvised on 30 April in the confusion before his arrest, demonstrates the unreadiness of SouthCom, or rather its misunderstanding of Venezuelan society. The US state apparatus, which had six months to prepare, proved unable to organise joint operations by the different agencies and soldiers on the ground. And despite the reigning disorganisation, the Bolivarian army was nonetheless ready to defend itself.

As anticipated, Washington, the Lima Group (except Mexico) and their allies recognised Juan Guaidó as the replacement for Nicolás Maduro as President of Venezuela, but this has plunged the US camp into a turmoil of unsolvable problems. Spain has already expressed anxiety at having been deprived of an interlocutor for the Venezuelans who have taken refuge in Spain, and for the Spanish citizens living in Venezuela. Never before, even in war time, has the legitimacy of a constitutionally elected President and his administration been denied.

In the space of a few weeks, Washington stole most of Venezuela’s overseas assets, just as it did in 2003 with the Iraqi Treasury, in 2005 with the Iranian Treasury, and in 2011 with the Libyan Treasury. This money has never been recuperated by its rightful owners, except by the Iranians during the JCPOA agreement. The Iraqi and Libyan régimes were overthrown, and their successors were careful not to take the affairs to trial. But this time, the Bolivarian Republic held fast, and the US situation is now untenable.

On a smaller scale, it will be interesting to observe how Washington is going to handle the affair of the Venezuelan embassy in the US capital. Police were sent to expel the occupants and set up a team nominated by Juan Guaidó. But the legitimate occupants refused to give up, despite the fact that their electricity and water had been cut off. With time, they received reinforcements, including that of Afro-American pastor Jesse Jackson, who came to bring them food. Finally, they were expelled. Now Washington has no idea how to justify its behaviour.

Calling an end to this tug of war, Donald Trump reminded his troops of their compromise – overthrow Maduro « yes », kick off a major war « no ». President Donald Trump is a Jacksonian; his security advisor, John Bolton, is an exceptionalist;[8] « exceptionalism »and Elliott Abrams, who campaigned against them, is a neoconservative – three ideologies which exist in no other country (except for the neoconservatives in Israel). Evidently, this sort of unnatural wedding cannot work.

Seeking to dodge the responsibility for its failure in Venezuela, the deep state immediately launched an Iranian diversion to save Elliott Abrams and get rid of John Bolton. The US Press protects the former and blames the latter.[9]

Without hesitation, noticing the breech between the Pentagon and the White House, the Democrats once again set off to explore the trail of Russian interference, this time aiming their guns at the President’s oldest son, Jr.

The Iranian dossier is very different from that of Venezuela. Although in Venezuela, the United States have led multiple operations since 2002 against the Bolivarian model and the aura it enjoys in Latin America, it was only last year that they began to target the population directly. On the contrary, however, since the beginning of the 20th century, the Iranian people have had to face up to colonialism. Famine and disease killed 8 million Iranians during the British occupation of the First World War.[10]

The overthrow of Nationalist Prime Minister Mohammad Mossadegh by the United States and the United Kingdom in 1953, followed by his replacement with Nazi General Fazlollah Zahedi, who triggered the terrible repression by the Savak, is widely known. The arrest of a group of CIA agents caught red-handed on a private floor of the US embassy is still presented in the West as a « diplomat hostage-capture » (1979-81), although Washington has never instituted legal proceedings on this case, and two freed Marines confirmed the Iranian version. In 1980, the Western powers demanded that Iraq enter into war with Iran. They sold weapons to both sides to help them kill each other, and fought alongside the Iraqis when the tide of war almost turned against them.

A French aircraft carrier even participated in the combats without the French people being informed. This war caused 600,000 deaths on the Iranian side. In 1988, the US Army shot down an Iran Air commercial flight, causing 290 victims, but never proffered the slightest excuse. Not to mention the stupidity of the excessively heavy sanctions on nuclear power – the United States and Israel pretend that Tehran is pursuing the Shah’s atomic programme. But the most recent documents published by Benjamin Netanyahu attest that this is an extrapolation. The Guardians of the Revolution were considering only the fabrication of a shock-wave generator, which, it is true, may be used as part of a bomb, but which does not in itself constitute a weapon of mass destruction.[11]

So it is in this context that Iran announced that it would no longer respect a clause of the nuclear agreement (JCPOA), as is its right according to the Treaty when another party – the USA as it happens – fails to respect its obligations. Besides this, it gave the European Union two months to announce whether or not it intended to honour its obligations. Finally, a US Intelligence agency broadcast an alert that a note from the Supreme Leader, Ayatollah Ali Khamenei, hinted that Iran was preparing attacks on US diplomats in Erbil and Baghdad.

1. Washington sent the naval military group of the USS Abraham Lincoln into the Gulf, and removed its non-essential diplomatic personnel from Iraq.

2. Saudi Arabia, which accuses Tehran of having sabotaged its petroleum installations, is calling on Washington to attack Iran. Bahrain has asked its citizens to leave Iran and Iraq immediately. ExxonMobil has removed its personnel from the Iraqi site of West Qurna 1.

3. The Commander of CentCom, General Kenneth McKenzie Jr., has asked for reinforcements.

4. The New York Times has revealed a plan for the invasion of Iran by 120,000 US soldiers. This was immediately denied by Donald Trump, who called on Iran to open discussions.

None of this is particularly serious.

Contrary to the suppositions in the Press:

1. The report by US Intelligence concerning a possible attack on its diplomats is based on a note by Supreme Leader Ali Khamenei. But the analysts agree that another interpretation of this same document is possible.[12]

2. The US naval group did not enter the Gulf in order to threaten Iran. This movement had been planned long ago in order to test the naval anti-missile system AEGIS. A Spanish ship, the frigate Méndez Núñez, which took part in the movement, refused to continue with the mission in order to avoid getting dragged into the confusion. It did not cross the Strait of Hormuz and is docked at Bab el Mandeb.[13]

4. Without the support of the pro-Iranian Iraqi militia, the United States would lose their foothold in this country.

Unfortunately, the Iranian government refuses all contact with President Trump and his team. We need to remember that Sheikh Hassan Rouhani, then a parliamentarian, was the primary contact with the Western powers during the Iran-Contra affair. He knows Elliott Abrams personally. He put the US deep state in relation with Ayatollah Akbar Hashemi Rafsanjani, who became the richest billionaire in Iran thanks to this arms traffic. It was on the basis of this service that the United States assisted his victory against Mahmoud Ahmadinejad’s team. Ahmadinejad was prevented from participating in the election, and his team’s main members are currently in prison. He considers, rightly or wrongly, that Donald Trump’s withdrawal from the nuclear agreement was aimed at using the popular discontent of December 2017 to overthrow him. He continues to believe that the European Union still supports him, despite the fact that the Treaty of Maastricht and those that followed prevent Brussels from withdrawing from NATO. It is therefore perfectly logical that Iran twice refused Donald Trump’s offer of discussions, and is waiting for the return of the globalists to the White House.

Of course, with this tendentious cast-list, we can not exclude the possibility that the scenario might go sideways and provoke a war. In reality, the White House and the Kremlin are talking to each other. Neither the US Secretary of State, Mike Pompeo, nor his Russian opposite number, Sergey Lavrov, have any wish to get tangled up in this trap.