Image right: Syrians cast their ballots in the Syrian presidential elections at a polling station in the city of Homs, north of Damascus, on 3 June 2014. (AFP Photo/Joseph Eid)

Of course these Syrian presidential elections must be the ‘parody’ and ‘farce’ that Western officials and media are relentlessly claiming. Because if Bashar Assad wins handily in the first multi-candidate presidential elections in Syria – which all evidence suggests will be the case – that would mean that a majority of Syrians support Assad, the army, the state and ‘the system’. Which immediately calls into question the past three years of conflict: was there ever actually a widespread, popular uprising against Bashar Assad?

Well, no – not if Assad wins a respectable majority on 3 June 2014 [he did - Ed], and more importantly, if a significant percentage of Syrians take the trouble to actually show up and vote [They did - Ed].

Voter turnout is critical in these elections. Syria’s foes will go to the wall with claims of fraudulent votes, but they can hardly contest the visuals of millions of Syrians casting them.

Which is why Western ‘democracies’ and many Arab allies have sought to inhibit the democratic process by obstructing Syrians from voting at their embassies. It is embarrassing for them then that thousands of Syrian refugees have crossed the Lebanese border to vote (Lebanon initially threatened they would not be able to return), and that Syrians from the United States, Kuwait, UAE, France, the Netherlands and elsewhere have chartered flights to Damascus so their votes can be counted.

It is also why Syrian rebels have shelled and bombed their way across Aleppo, Homs and other areas in the lead-up to the elections: a threat for voters to stay home. Different support

Legitimacy. It is what Syrians are seeking to establish with these elections, and what their adversaries are trying hard to deny. You can intervene to aid a population against an illegitimate government. But you would be in contravention of international law if you did so against a state that enjoys legitimacy. It would be an act of war to supply weapons, train mercenaries, to fund and fuel conflict. It would be ‘subverting the will of the Syrian people’.

While Western audiences express surprise and skepticism at scenes of Syrians flocking to cast votes for Assad, foreign officials everywhere knew this would happen. This is the dirty little secret that Assad’s adversaries have spent three years trying to bury: the president has always clearly maintained a small majority of Syrian support.

Karen Koning AbuZayd, UN commissioner for the Independent International Commission of Inquiry for Syria, was one of the first officials to publically acknowledge support for Assad in early 2013, saying, “There’s quite a number of the population, maybe as many as half – if not more – that stand behind him.” 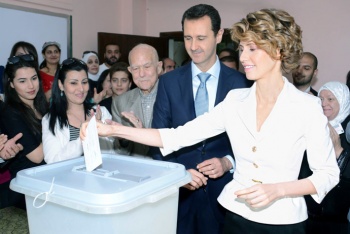 Syrian President Bashar al-Assad watching as his wife Asma casts her vote at a polling station in Maliki, a residential area in the centre of the capital Damascus, in the country's presidential elections on 3 June 2014
(AFP/SANA)

In February, Iran’s Ambassador to Lebanon Dr. Ghazanfar Roknabadi publicly quoted the pleas of UN Under-Secretary-General Jeffrey Feltman, during a visit with Iranian officials in Tehran, to nix Assad’s participation in Syrian elections because, “If he runs, he will win the elections.” [1]

If it were possible to suspend the enormous weight of Western media disinformation for a moment, the reason for Assad’s continued support during the past three years is fairly logical:

This is why, if Syrian National Coalition (SNC) President Ahmad Jarba himself were running against Assad in verifiably-fraud-proof elections, he would lose.

Jarba is, of course, the Syrian candidate that most Western nations and many Arab League member states have rallied behind – even though he received only 55 Syrian votes to gain this unusual ‘legitimacy’.

Assad will likely garner millions of votes [He did - Ed], but those nations insisting on Syrian ‘democracy’ and ‘legitimacy’ are happy to hand over Syria’s embassies to a man with 55 votes. Is this a farce? Or is it a parody?

“How can you hold elections during a war/conflict/humanitarian crisis?” these opponents demand. None, of course, objected when elections were held in US- and NATO-occupied Afghanistan and Iraq, under the auspices and direction of the occupying army. Some elections enjoy ‘legitimacy’ just because we say so, apparently.

Lincoln’s re-election in 1864 was viewed as a referendum on the direction of the then-three-year Civil War. If he won, it meant Americans backed the Union’s military campaign against the south; if he lost it would undermine the legitimacy of the war effort. He was asked to postpone the election, but rejected that proposal saying, “We cannot have free government without elections; and if the rebellion could force us to forego or postpone a national election, it might already fairly claim to have conquered and ruined us.”

For a bit of unexpected comic relief, Jarba penned a Washington Post opinion piece on Monday in which he invokes former US President Abraham Lincoln. [2] Did nobody tell Jarba that Lincoln was re-elected during the most brutal domestic conflict in American history – that thing called the Civil War?

In fact, 11 US states (including important ones like Texas, Virginia and Florida) where Lincoln barely received votes, got so upset when he was first elected they decided to leave the Union. Lincoln fought a war to defeat those ‘rebels’ and went on to be immortalized on the $5 bill.

Doesn’t that still disenfranchise potentially millions of Syrians who won’t be able to vote? Yes, possibly. But that didn’t stop these same Western countries from declaring the recent Ukrainian elections a resounding success, even though there was virtually no voting in the Donetsk and Lugansk Regions.

The first US presidential election in 1789 didn’t even count the votes of North Carolina, New York and Rhode Island, even though the Union was only made up of 13 states at the time. George Washington ran uncontested and most of the votes were not cast by American citizens, but by unelected delegates. And he too has been immortalized on US currency –on the dollar bill.

A parody of democracy? Oh, most certainly a farce. Americans have FOUR times cast votes for a president that the electoral college didn’t select. The most recent being in 2000, when over 1 million more Americans cast votes for Al Gore than for George W. Bush, but the latter won the presidency because of some 500 Florida votes that the US Supreme Court refused to recount.

No elections seem to be without irregularities these days, so voter participation really does become a factor in gauging ‘legitimacy’. Do citizens have enough trust in their system of governance to want to engage?

Let’s look at some recent elections to get a sense of ‘legitimacy’. Nearly 73 percent of eligible Iranians cast votes in the 2013 presidential elections; in the hotly contested 2009 elections, that number was close to 85 percent. In Venezuela, 79 percent cast votes in 2013, and 80 percent in 2012 for the late Hugo Chavez. The Russian presidential elections in 2012 saw a participation rate of 65 percent, while the last US elections ushering in Barack Obama’s second term recorded a 57-percent voter turnout. Winning a whopping 92 percent of the vote, new Egyptian President Abdel Fattah Sisi only managed to attract 46 percent of voters to the ballot box last month. In Iraq’s April election, some statistics suggest a 60 percent turnout, but voting was restricted or nonexistent in parts of Anbar province, with troops surrounding Fallujah and street battles in Ramadi. Afghanistan’s election, while lauded by its occupiers for the “massive turnout” [4] (no actual figures yet available), was also distinguished by the fact that 1,000 of the anticipated 7,500 polling centers were closed because of potential threat of violence.

In short, elections these days are all over the place. They take place in wartime; they take place under occupation. Voters participate heavily in some, and shun others – war or peace makes little difference, it seems.

On Tuesday, Syrians cast votes across much of their country. The situation was not ideal. Millions are displaced, a war rages, all Syrians do not have access to polls. But Syrians still turned out in force – to the surprise of many – to participate in forging the direction of their nation. Do they love Bashar Assad or do they just seek stability? Who cares? If voter turnout is large and the winning candidate is selected by a wide margin, this speaks directly to what ‘the Syrian people’ have decided.

Legitimacy can only be conferred by the citizens within a nation – this is never an issue that can be decided by foreigners outside a country, no matter how much the headlines blare it to sway perception.

Farce? Parody? Tell it to Abe Lincoln. And then go mind your own business.

That’s the thing about elections, they tell a very particular story. You can choose not to listen, you can toy with the tale, but you can’t change the ending.