Translated from French by Roger Lagassé

Wikispooks Comment You liked the Gulf of Tonkin incident and the Vietnam War? - the Kuwaiti incubators and the first Gulf War? - the Racak massacre and the War in Kosovo? - Iraq’s weapons of mass destruction and the second Gulf War? - and the threats to Benghazi and the Libyan war? You will love the gassing of civilians in Ghouta and the bombing of Syria. 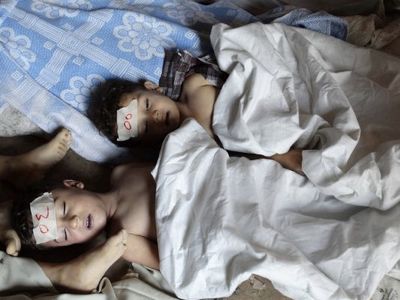 In a statement released by the White House, the U.S. Director of Intelligence, James Clapper, said that 1,429 people were killed in a massive chemical attack on a dozen localities, August 21, 2013 in the suburbs of Damascus [1] .

The French services were unable to conduct an on-site victim toll, according to the declassified notes of intelligence coordinator Alain Zebulun [2]. However, they saw about 281 victims on videos, while the French "non-governmental" organization, Doctors Without Borders, counted 355 in hospitals.

Allied services all refer to videos. So, the Americans have collected a hundred on YouTube, while the French have only found 47. Washington and Paris consider them all as authentic. However, some of them were posted at 7:00 am, Damascus time (which explains why they are dated August 20th on YouTube, which is based in California), but with an almost midday sun, which implies they were filmed in advance [3].

All observers have noted the high proportion of children among the victims. The United States has counted 426, or more than a third. Some observers, but neither those of the US nor their French counterparts, were intrigued to find that victims were almost all of the same age and they had no families to cry over them. Stranger still, the gas would have killed children and adult men, but would have spared women.

The wide distribution of satellite channel images of victims allowed Alawite families near Latakia to recognize their children who had been abducted two weeks prior by the "rebels." This identification was long in coming because there are few survivors of the massacre by the allies of the United States, the United Kingdom and France in loyalist villages where more than a thousand bodies of civilians were discovered in mass graves.

Americans, British and French agree that the victims were killed by nerve gas that could be sarin or contain sarin. They claim to base their findings on their own analysis, carried out in their laboratories on samples collected by each of their services. However, the UN inspectors, who came on site to collect other samples will give their verdict in a dozen days. Indeed, the analyzes carried out by the Americans, British and French are unknown to the world scientific community for whom culturing tissue samples requires a much longer period.

Though it is clear that the children died of chemical poisoning, it is not at all certain that they were gassed. The videos show that the dying produce a white foam while sarin causes yellow emissions.

The three Western powers also agreed to attribute the responsibility for this event to various extents to the Syrian Arab army. The U.S. Director of Intelligence says that its services observed the Syrian military, during the previous four days, mixing chemicals. The chairman of the British Intelligence Committee, Jon Day, assures that the Syrian Arab army is not at its first attempt and has used gas 14 times since 2012 [4] that is to say as many cases as reports of the use of chemical weapons by the United States during the Second Gulf War.

The revelations of the US, British and French services are corroborated by a telephone interception. According to this narrative, a senior official of Syrian defense would have made a panicked call to the head of the chemical gases unit about the massacre. However, the interception was not made ​​by the Americans, British or French, but was provided by Unit 8200 of the Israeli Mossad [5].

US, British and French services are 100% certain that the Syrian Arab army gassed an unknown number of civilians:

In international law, war propaganda is the most serious crime because it makes all other crimes possible.

+
Has author
Thierry Meyssan +
Has documentType
article +
Has fullPageName
Document:Western rationality on Syria CW attacks +
Has fullPageNamee
Document:Western_rationality_on_Syria_CW_attacks +
Has noRatings
0 +
Has objectClass
Document +
Has objectClass2
Document +
Has originalLanguage
French +
Has publicationDate
September 7, 2013 +
Has revisionSize
6,326 +
Has revisionUser
Robin +
Has translator
Roger Lagassé +
Is about
Syrian Chemical Weapons Attack +
Is not stub
true +
Sourced from
Voltaire Network +