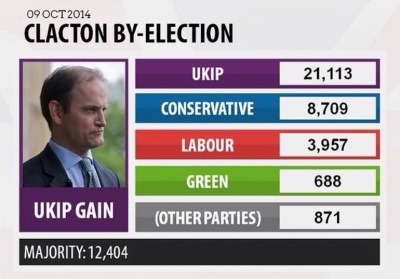 Douglas Carswell (born 3 May 1971) is a former Tory MP who defected to the UK Independence Party and resigned from Parliament on 28 August 2014 causing the Clacton by-election on 9 October 2014, in which he was elected as UKIP's first MP.[1][2]

On 25 March 2017, Carswell addressed an email to thousands of his Clacton constituents:

"I wanted to let you know that I will be leaving UKIP and sitting in Parliament as an independent MP. I will continue as your MP, representing you and our area.

"Like many local people, I switched to UKIP because I wanted Britain to leave the European Union. Last June in the referendum a majority voted to leave – including a large majority of people in our part of Essex. The formal process of leaving will be triggered by Mrs May on Wednesday. Job done.

"I will not be switching parties, or crossing the floor to the Conservatives, so do not need to call a by-election, like I did when switching from the Conservatives to UKIP. I will simply sit in the Commons as your representative, answering directly to you, my boss.

"I remain absolutely committed to our area. My local advice surgeries continue as normal, and my office is open to serve you."

Douglas Carswell is the son of two medical doctors, and grew up in Africa, where his parents worked with the local communities.[4] He lived in Uganda until his late teens. His father, Wilson Carswell, a respected physician and Fellow of the Royal College of Surgeons, diagnosed the first confirmed cases of HIV/AIDS in Uganda during the early 1980s,[5] and was one of a number of people engaged in drawing the world's attention to the unfolding pandemic.[4]

Carswell attended St Andrews School, Kenya, before being educated at Charterhouse School, the University of East Anglia where he read History graduating as BA in 1993, and King's College London graduating in 1994 with a post-graduate MA degree in British Imperial History.

He worked as Corporate Development Manager for Television Broadcasting in Italy from 1997–99, and for INVESCO, reporting to the Continental Europe regional CEO, from 1999 until 2005 before entering politics.

Douglas Carswell was first elected to Parliament at the 2005 General Election for the constituency of Harwich, defeating Ivan Henderson, the sitting Labour MP, by 920 votes. His maiden speech to the House of Commons was during a debate on the Identity Cards Bill,[7] since when he has been a member of Conservative Friends of Israel as well as serving on the Commons Education Select Committee and the Public Accounts Committee.

Shortly after entering Parliament, Carswell co-authored a publication Direct Democracy: an agenda for a new model party. This publication has been described by The Spectator (2 June 2007) as "one of the founding texts of the new, revitalised Toryism .... written by some of the brightest young Conservative thinkers". It sets out much of the thinking that has now become central to the Conservatives under PM David Cameron. In July 2005, Carswell became a founder member of the Cornerstone Group, led by Sir Edward Leigh, which represents traditional Conservative and Tory values. He also founded Direct Democracy, a group of like-minded modernisers within the Party committed to making localism the core of the Conservative Party's platform.

After returning from an Armed Forces Parliamentary Scheme (AFPS) trip to Afghanistan, Carswell criticised the British military's poor equipment and lack of helicopters that he had witnessed, which resulted in his ejection from AFPS.[8]

Carswell caused waves in the political world by leading a campaign to bring about the removal of the Speaker of the House of Commons, the first time for over 300 years.[9] He defied traditional Westminster thinking in April 2008,[10] when he became the first MP to publicly call for Speaker Michael Martin to be fired for his failure to ensure greater transparency as to how the House of Commons is run.[11] No other MPs were then prepared to speak out against Martin, being strongly discouraged by the likes of Labour ex-minister Denis MacShane (later sent to prison for expenses fraud) who petitioned for Carswell to be disciplined for making this call.[12] Despite suggestions that Carswell would never be called to address the House again, Martin granted him his first opportunity to speak at PMQs the following week.[13] Carswell pressed this issue again in September 2008, arguing that Speaker Martin opposed 'all reform on principle' of second-home allowances and expenses.[10] In May 2009, he then put forward the motion of no confidence, backed by 22 MPs, triggering Martin's downfall in June.[14]

In December 2009, Carswell tabled a Bill in the House of Commons to introduce a public referendum on Britain's EU membership.[15] In February 2010, he asked Cabinet Secretary Gus O'Donnell to suspend Cabinet meetings held outside London,[16] when it became apparent that Gordon Brown's Government was using them to host Labour Party events in marginal seats.[17]

In the newly-created constituency of Clacton at the 2010 General Election, Douglas Carswell increased his majority over Henderson to 12,068 votes. The Eurosceptic UK Independence Party decided not to field a candidate against Carswell but instead actively campaigned in support of his re-election in view of his staunch anti-EU views.[18]

In the first week of the new parliamentary session of the Conservative-led Government, Carswell revealed he intended to force a referendum on the Treaty of Lisbon by re-ratifying the Treaty.[19][20]

On 28 August 2014, Douglas Carswell defected from the Conservatives to the UK Independence Party and, although not required to do so, resigned his seat out in order to win his constituents' mandate. The resulting by-election is to be held on the 9 October 2014 which Carswell will contest for UKIP.[21]

Dod's political biography of Carswell describes him as being "tall and Eurosceptic ... one of his party's radical thinkers". The Economist has dubbed him "the thinking man's [U]kipper".[22] Carswell was described in The Sunday Times in July 2008 as 'one of the energetic young Tory modernisers elected to the Commons in 2005'.[13]

Carswell has become known at Westminster for being an outspoken advocate of political reform and action to clean up British politics.[23] He has proposed radical change to force politicians to answer outwardly to the electorate, rather than just amongst other politicians.[24] In recognition of his stance, the Daily Telegraph nominated him a Briton of the Year 2009,[25] and Spectator readers voted him their choice as "Parliamentarian of the Year" in the same year.[26]

Carswell is sceptical of anthropogenic global warming, believing current climate change to be driven by non-human factors. He came to this position after extensive reading, including Ian Plimer's Heaven and Earth.[27][28]

Carswell is the only Conservative MP returned at the 2010 General Election to have openly advocated proportional representation.[29]

After being elected in 2005, Douglas Carswell originally designated a £1 million flat in London as his second home, and claimed over £21,000 for food, rent and furniture. In 2007 he began renting a house at Thorpe-le-Soken in his constituency, which he designated his second home, and again paid a deposit and for furniture, including a £655 love seat, from his expenses. Between 2007 and 2009, he claimed £32,000 in expenses for the house. Carswell admitted to using expenses to buy "an armchair, sofa and some bedding, as well as a few other modest items of crockery and furniture", and commented "I believe this is entirely justified".[30][31] In the 2012–13 financial year, he claimed £39,442.86, a larger figure than any other Essex MP. Carswell stated in July 2012 that his expenses had been greater than those of other MPs due to his need to rent accommodation close to Parliament.[32]

Influence over the Conservative Party

Conservative Party commentator and Daily Telegraph columnist Charles Moore credits Douglas Carswell, together with MEP Daniel Hannan, as the architects behind the idea of a Great Repeal Bill, as well as the concept of a "Contract with Britain" offered during the election, the "recall" of MPs who have displeased their constituents, open primaries for the selection of parliamentary candidates, and plans for elected Police Commissioners."[33] According to Moore's analysis not only is "The localism of the Carswell/Hannan "direct democracy" movement is now good Coalition orthodoxy", but Cameron's policy guru, Steve Hilton, "enthusiastically lifted several bits of The Plan", the best-selling moderniser book written by Carswell and co-author Daniel Hannan.

Even before the formation of the Coalition, the influence of Carswell's ideas was evident in speeches made by David Cameron – most notably in a speech to the Open University at Milton Keynes in May 2009.[34] Blogger Guido Fawkes, who describes The Plan as a "huge hit, an Amazon bestseller and the all-time best-selling publish-on-demand publication ever sold by Amazon", also noted the influence of the book on Conservative political thinking.[35]

Carswell has frequently been invited to speak at conferences and seminars on a range of policy topics in which he has no formal role within the Party, such as reform of the criminal justice system,[36] constitutional reform,[37] defence and local government.