Drug smuggling is the illegal transshipment, e.g. across borders of nation states, of drugs. It can be highly profitable, reflecting a high demand for the small volume product. Drug smuggling, like weapons smuggling, is systematically misrepresented by the commercially-controlled media to hide the degree to which the deep state - and the CIA in particular - is responsible for drug trafficking. While small groups no doubt do smuggle drugs, the most significant shipments are carried out using establishment insiders and are measured in tons.[1]

Wikipedia redirects the topic to the "Global drugs trade" and has never had a separate page on "drug smuggling".[2] Most[3] corporate media has chosen to ignore the involvement of deep state controlled groups such as the CIA in the business of drug smuggling.

The "war on drugs" is an essential backdrop to the global drug trade, most obviously since it keeps profit margins up by maintaining a huge price differential between producer and consumer nations. It also keeps competition down by using groups such as the DEA or the US Customs and Border Protection to try to remove independent groups from dealing with drugs. Sibel Edmonds reports that these groups are regularly prevented from intercepting the large scale smuggling efforts by deep state forces, which intervene at the last minute citing a pretext such as "national security" or the need to prevent a diplomatic incident.[4]

In November 1993, just after leaving his post as DEA Administrator, Robert Bonner appeared on 60 Minutes[5] and criticized the CIA for permitting a drug shipment of one ton of pure cocaine to be smuggled into the U.S. without notifying and securing the DEA's approval.[6] The pattern of large scale continued CIA drug dealing has given rise to events such as Cocaine 1, Cocaine 2 or Western Global Airlines N545JN. The continued failure of commercially-controlled media to show interest in these events underlines the extent to which it is not only the CIA which controls the drug smuggling, but a covert network which can also effect a more or less global corporate media cover.

“I stood at the Friendship Bridge at Termez [Uzbekistan] in 2003 and watched the Jeeps with blacked-out windows bringing the heroin through from Afghanistan, en route to Europe. I watched the tankers of chemicals roaring into Afghanistan. Yet I could not persuade my country to do anything about it.”
Craig Murray [7]

In 2015 a Saudi prince, Abdel Mohsen Bin Walid Bin Abdulaziz, was arrested in Syria with 2 tons of illegal drugs on board his private jet,[8] a record seizure in Beirut.[9] 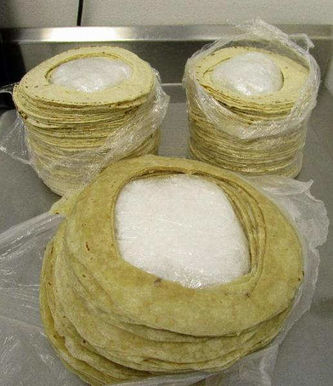 U.S. Customs and Border Protection reported in 2016 that "two men involved in separate weekend attempts to sneak approximately $87,000 worth of methamphetamine through the Port of Nogales." If this sounds like a lot, you are not paying attention.

Although the DEA did cite the 2006 Mexico DC-9 drug bust‎ as an example of their campaign to intercept smuggling by sea[10] it received minimal attention from the corporate media. Corporate media instead focuses on relatively low level attempts by individuals or groups to evade detection by authorities.[11][12][13][14][15]

While drug mules or cocaine-filled pineapples make for graphic images, it also hides the evidence that suggest that the largest drug shipments never go through customs, but instead are part of the global drug trade shapes US Foreign policy[16] such as the invasion of Afghanistan or Plan Colombia are influenced by potential profits reaped from drug trafficking (heroin and cocaine respectively).