As of November 2019, 21 Nobel laureates, 2 Fields Medalists, 2 Pritzker Prize winners, and 1 Turing Award winner have been affiliated with the Institute, including Albert Einstein. Other notable alumni include John von Neumann and Santiago Calatrava[3] It is a founding member of the IDEA League and the International Alliance of Research Universities (IARU) and a member of the CESAER network. 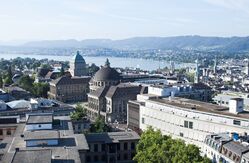 ETH Zurich was founded on 7 February 1854 by the Swiss Confederation and began giving its first lectures on 16 October 1855 as a polytechnic institute (eidgenössische polytechnische Schule) at various sites throughout the city of Zurich.[4] It was initially composed of six faculties: architecture, civil engineering, mechanical engineering, chemistry, forestry, and an integrated department for the fields of mathematics, natural sciences, literature, and social and political sciences.

It is locally still known as Polytechnikum, or simply as Poly, derived from the original name eidgenössische polytechnische Schule,[5] which translates to "federal polytechnic school".

ETH Zurich is a federal institute (i.e., under direct administration by the Swiss government), whereas the University of Zurich is a cantonal institution. The decision for a new federal university was heavily disputed at the time; the liberals pressed for a "federal university", while the conservative forces wanted all universities to remain under cantonal control, worried that the liberals would gain more political power than they already had.[6] In the beginning, both universities were co-located in the buildings of the University of Zurich.

From 1905 to 1908, under the presidency of Jérôme Franel, the course program of ETH Zurich was restructured to that of a real university and ETH Zurich was granted the right to award doctorates. In 1909 the first doctorates were awarded. In 1911, it was given its current name, Eidgenössische Technische Hochschule. In 1924, another reorganization structured the university in 12 departments. However, it now has 16 departments. 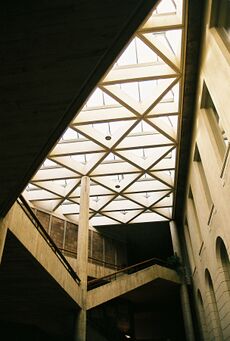 Interior skylights in the main building

ETH Zurich, the EPFL, and four associated research institutes form the "ETH Domain" with the aim of collaborating on scientific projects.[7]