Ebola is a naturally occurring, viral hemorrhagic fever; outbreaks typically occur in tropical regions of Sub-Saharan Africa. It was first identified in 26 August 1976. During the 2010s, several Ebola outbreaks received huge attention, especially from many of the actors who later would play a role in the Covid-19 situation.

The fight against Ebola soon turned into a Western-led militarized response reinforced by a "media-generated panic",[1] in what might be described as a dress rehearsal for the grand-scale 2020 lockdowns and repeal of civil liberties.

In 2014, when U.S. armed forces, to the accompaniment of media fanfare in the face of an alleged global menace, proceeded to erect a number of Ebola Treatment Units (ETUs — essentially, large tents containing rows of cheap plastic mattresses) all across West Africa, these emergency facilities were to stand empty. As of April 2015, only 28 Ebola patients had been treated at the 11 ETUs built by the U.S. military; nine centers never received a single Ebola patient[5].

There were very few imported cases of Ebola in Europe in connection with the Ebola outbreak in West Africa (one in Italy, one in Spain and three in the United Kingdom) and one acquired locally (a health care worker infected while caring for an evacuated Ebola patient in Spain)[6]. Eleven cases were reported in the United States[7].

Infection occurs from direct contact—through broken skin or mucous membranes — with the bodily ﬂuids of infected people; it does not appear to spread through vectors (like bubonic plague) or coughs and sneezes (like inﬂuenza or SARS). Early ﬁndings that the virus kills 90 percent of its victims proved exaggerated; in 2014 the WHO reported an average 50 percent death rate[8], while one expert projects a survival rate as high as 90 percent with adequate treatment[9].

But since the symptoms of Ebola are very broad (vomiting, bleeding, diarrohea, fatigue, weakness, lack of appetite), and these very same symptoms could be caused by a multitude of different causes, the possibility of misdiagnosis exists.

The “hot zone” areas of Ebola, Sierra Leone, Guinea, and Liberia, have been decimated for a long time: war, extreme poverty, malnutrition, starvation, contaminated water supplies, exposure to toxic industrial chemicals, vast toxic overuse of antibiotics, pesticides (some of them banned in other countries), expired and unrefrigerated medicines, vaccines (which, when given to people whose immune systems are already hanging on by a thread, can be lethal)[10].

As a 2014 Unicef paper pointed out, "the symptoms of Ebola are not specific. Fever, weakness, and headaches could be anything from the flu to malaria". There is no easy way to make a laboratory diagnosis of Ebola.

Intriguingly, the ‘gold-standard’ for finding Ebola is a polymerase chain reaction - a PCR-test) - which later became one of the deceptive and misleading main tools to inflate number of cases in the Covid-19 situation[11][12] 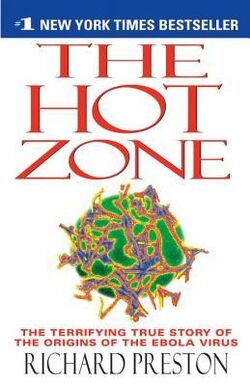 Ebola’s uniquely monstrous reputation in the West dates from the appearance of Richard Preston’s 1992 New Yorker article, “Crisis in the HotZone,” and subsequent 3.5-million-copy lurid bestseller The Hot Zone: A Terrifying True Story (1994). Preston’s book creates suspense by suggesting, falsely, that the virus is liable to become airborne at any moment, and dramatically distorts the symptoms of the disease—for example, patients are described as “bleeding out” from every orifice and “weeping tears of blood” while their internal organs “liquefy.” A 1995 Hollywood movie,Outbreak, further consolidated the Ebola myth.

The most publicized outbreak was detected in March 2014. An Ebola outbreak began due to natural causes in Guinea in December 2013 but was not detected until March 2014,[14] after which it spread to Liberia, Sierra Leone, and Nigeria.

Predictions of an uncontrollable global epidemic were common, sometimes reaching apocalyptic proportions[15]. By October 2014, two-thirds of US-Americans said they were worried about a widespread Ebola epidemic in the United States[16]. By April 2015, approximately 10,000 deaths had been recorded, mostly in West Africa. The number is more than previous epidemics, but still an insignificant number (and given Ebola's similarity to malaria and the way PCR-tests later were used to inflate the number of Covid-cases, the numbers might conceivably have been fudged[citation needed]). 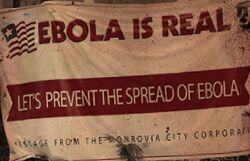 The locals in West Africa were skeptical of certain aspects of the declared epidemic (misdiagnosis, the severity of the situation, biological research etc.), necessitating a massive propaganda campaign by Unicef and Western NGOs[17]. Posters with "Ebola is real, Ebola is here, and Ebola kills," were put up on streets; pop songs with the line “Ebola is real” became #1 on the chart on the radio there[18] and even public service messages being played at the start of each incoming phone[19] call reminding Liberians 24/7 that Ebola is indeed real[20].

The Bill and Melinda Gates Foundation

On September 10, 2014, the Bill & Melinda Gates Foundation (BMGF) announced plans to commit $50 million “to support emergency response to Ebola” (BMGF 2014a). BMGF publicity suggested, without precisely saying so, that the entire sum would be committed to near-term disaster relief and investments in local health infrastructure.

In the event, however, BMGF’s response to Ebola was carefully calibrated to advance the organization’s long-term strategic goals. A small portion of the money pledged was immediately released to existing emergency responders, but the remainder was vaguely allocated to “work with public and private sector partners to accelerate the development of therapies, vaccines, and diagnostics that could be effective in treating patients and preventing further transmission of the disease”[21].

In practice, this meant a variety of investments in projects of the kind BMGF typically funds—for example, biomedical R&D, Big Data initiatives, vaccine development—as well as the creation of new U.S.-based PPPs designed to override the authority of local health systems.[22]

Bill Gates' blueprint for the future

The article “The Next Epidemic — Lessons from Ebola”, published New England Journal of Medicine, was a “global call to action”. Reinforced by a much publicized op-ed in the New York Times[29] Gates sketched an action plan that had uncanny similarities to what happened during Covid-19[30]:

The Ebola crisis offered useful cover for a substantial escalation in U.S. military presence[31] . Calling Ebola a “top national security priority for the United States,”[32] in September 2014 the White House authorized the deployment of 3,000 troops to Guinea, Liberia, Sierra Leone, Nigeria, and Senegal under AFRICOM command.

AFRICOM, the U.S. military command established in 2007 charged with responsibility for all African nations with the exception of Egypt, was in the midst of a rapid expansion aimed at securing U.S. interests across the continent. Established in 2007 with the purported goal of facilitating disaster relief and “war prevention,” AFRICOM was widely understood among U.S. planners as a counter to growing Chinese influence in a region rich with strategic resources[34].

As a health effort, the U.S. military contributed little or nothing to controlling the epidemic. The most effective international aid came from Cuba, which made use of a robust universal health-care program to place nearly 500 health professionals on the ground in Sierra Leone,Liberia, and Guinea.

The UK led Operation Gritlock, where 750 military personnel were sent to Sierra Leone to "to help deal with the deadly Ebola outbreak"[35] in its former colony. The military Ebola Treatment Centre (ETC), co-located with the large Save the Children-run, DFID-funded site at Kerry Town, was the first in-country facility dedicated to treating healthcare professionals, both international and local[36]. Vaccine developers, including the UK pharmaceutical company GlaxoSmithKline, formed collaborations with the US National Institutes of Health and other international partners to vaccinate at-risk health care workers in the region. The London School of Hygiene and Tropical Medicine (LSHTM) initiated phase II vaccine trials in West Africa and the University of Oxford led phase I vaccine trials in the UK and elsewhere[37].

In 2014, a frequent talking point in Western policy circles was mentioning Ebola in the same breath as ISIS and Russia. President Barack Obama did so [38] when he outlined the three most significant global threats, as did British Prime Minister David Cameron when he in a speech lumped together Ebola, Islamic State and Russia as posing the greatest dangers to the world order[39].

On 8 May and then again on August 1, 2018, the Ministry of Health of the Democratic Republic of Congo declared Ebola outbreaks.[40][41] The WHO advised "against restriction" of travel.[42]

In July 2019 the WHO declared the continued outbreak a Public Health Emergency of International Concern[43] and scientists were wondering whether it had become more contagious after cases were reported in urban areas in the Congo and in Uganda.[44]

The Ebola Effort in the United States

Several of the actors who were part in the massive operation to counter Ebola in the United States, later played central roles in the Covid-19 situation.

Dr. Anthony Fauci, then director of the U.S. National Institute for Allergy and Infectious Diseases, envisaged a countrywide vaccination as early as October 2014 (which country or countries would get the rushed vaccine, he didn’t specify). At the time, his Institute was working on an experimental Ebola vaccine (the first to begin human clinical trials) in a partnership with GlaxoSmithKline.

“As the epidemic gets more and more formidable and in some cases out of control it is quite conceivable, if not likely, that we may need to deploy the vaccine to the entire country to be able to shut the epidemic down. That is clearly a possibility.”
Anthony Fauci (October 6, 2014)  [45]

In 2014, the US military was reportedly using a PCR-based microbiological analyzerfor Ebola detection that the FDA was "actively blocking" in the USA.[47]

The CDC approved two drugs for ebola in late 2020, inmazeb and ebanga.[48]

Ebola has had significant interest from the US biological warfare complex, formally for defensive purposes, but as always, there is no clear division between defense and offense in this area.

Noticeably, at the time Liberia and Sierra Leone were not parts (they joined in 2016) to the Biological Warfare Convention, which prohibits research into offensive biological weapons. Thus the countries can become loopholes outsiders to conduct - nominally local and legal - experiments that would otherwise be in breach of the Convention.

Cyril E. Broderick, a tenured professor of the Agricultural College of the University of Delaware, formerly professor of Plant Pathology at the University of Liberia's College of Agriculture and Forestry, was published in Liberia's largest newspaper claiming that "The US Department of Defense (DoD) is funding Ebola trials on humans, trials which started just weeks before the Ebola outbreak in Guinea and Sierra Leone."[49][50] Francis Boyle concurred.