Eeben Barlow, who retired in 1991 as Lieutenant-Colonel in the South African Defence Force, is the former Europe Director of the shadowy South African Civil Cooperation Bureau in the 1980s, when he was employed by De Beers in London and was responsible for setting up front corporations to evade sanctions such as UN Security Council Resolution 418 which imposed a mandatory arms embargo on apartheid South Africa (1977-1994).[1]

Eeben Barlow was commissioned in the SADF in 1975 and served with 101 Task Force, 53 Infantry Battalion, 54 Infantry Battalion, 32 Battalion (Reconnaissance Wing), Military Intelligence (Covert Collection) and Civil Cooperation Bureau (CCB), a direct action group associated with Special Forces. In Barlow's LinkedIn biography, he insists: "I was not a Special Forces operator."[2]

Barlow's final posting was Commander of CCB Region 5 which covered Europe and Middle East until, as he describes it, "I became politically expedient in 1991."

In 1989, Eeben Barlow co-founded with Simon Mann, a former British SAS officer, the private military company (PMC) Executive Outcomes (EO) in South Africa. EO activities, from its founding in 1989 through 1993, managed to escape the attention of the world's media until, in the Autumn of 1993, Executive Outcomes (UK) Pty Ltd was registered in London by Eeben Barlow, Tony Buckingham and Simon Mann.

From 1994 when EO became involved in Angola and later Papua New Guinea and Sierra Leone, this PMC lost much of its transparency. As a result, EO's activities became increasingly scrutinised by the press, defence researchers, and other concerned parties. With the passage of the new anti-mercenary law in South Africa, EO closed its doors on 1 January 1999, after 10 years' operations, Barlow having ceased to be its Chairman in 1997.[3]

In 2009 Barlow was appointed Chairman of the private military company (STTEP)[4] which was hired by the Nigerian government in 2015 to provide military training for the offensive against Boko Haram.[5] He currently lectures at military colleges and universities in Africa on defence, intelligence and security issues. Prior to 2009, Barlow served as an independent politico-military advisor to several African governments. He is a contributor to The Counter Terrorist magazine.[6]

While in the CCB, Eeben Barlow, who is recognisable by his one green and one blue eye, was assigned to Western Europe. There he was in charge of spreading disinformation against Nelson Mandela's African National Congress (ANC), for example, releasing propaganda in England that the ANC was working with IRA terrorists. He was also responsible for setting up front corporations to evade sanctions and sell South African weapons abroad. During this time, Barlow is suspected to have made many of his corporate world contacts that would later prove useful for EO.[7] 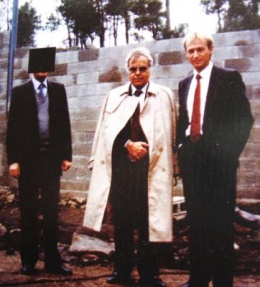 On 10 April 1983, PLO representative Issam Sartawi at the Socialist International congress was shot and killed in the lobby of the Montechoro Hotel in Albufeira, Portugal. The gunman escaped.

Issam Sartawi's assassination was witnessed by SI Secretary-General, Bernt Carlsson, and was assumed to have been carried out so as to frustrate Carlsson's Israel/Palestine peace efforts.[8]

Asked whether he knew one of the alleged assassins of Swedish Prime Minister Olof Palme, murdered in February 1986, Eeben Barlow replied on his blog:

"I am sure that either Athol Visser is a pseudonym but possibly someone who is making cheap capital out of CCB. Having met people who have either claimed to be me (that’s how they introduced themselves to me – using my name) or claimed to be in CCB, Region 5, I somehow doubt his story – but, he may have been tasked by a different CCB region to do work in London. Certainly in my time, there was no Athol Visser in Region 5.

"I would know as I recruited everyone who served in Region 5 – Europe and Middle East."[9]

In July 2011, Lockerbie campaigner Patrick Haseldine accused Eeben Barlow of carrying out the Lockerbie bombing on the orders of the South African State Security Council under the direction of 'superspy' Craig Williamson:

Bernt Carlsson, the CCB's target on Pan Am Flight 103

Eeben Barlow, commander of South Africa's Civil Co-operation Bureau (CCB) Europe Branch coordinated the Lockerbie bombing on 21 December 1988 by targeting UN Commissioner for Namibia, Bernt Carlsson, the most prominent of the 270 victims. At Heathrow airport, CCB operatives had six hours in which to substitute the 'bomb bag' for Bernt Carlsson's checked-in suitcase, while Carlsson was attending a meeting in London with the De Beers diamond cartel. No trace of his suitcase was ever found following the Pan Am Flight 103 disaster.[10]

1. On 21 December 1988, you were based in London as Regional Manager of CCB Region 5 when a bomb was placed on Pan Am Flight 103 at Heathrow airport. Suppose you were charged with the Lockerbie bombing, would you admit to the crime?

2. If not, could you please publish your alibi?

3. Could you please publish a list of all CCB operatives who were serving in Region 5 in 1988?

"I am used to being falsely accused of many things although I never expected a so-called Professor Emeritus to allow his blog to be used for disinformation purposes – unless, of course, he has proof of what he allows to be placed on his site or he is acting as someone’s propaganda agent...

"I would love to stand trial for this alleged crime and I cannot wait to hear what evidence Haseldine and Black will present during my trial."[12]

Via his friend Michael B da Silva, Barlow added:

"Mike, you are welcome to act as Haseldine’s relay station if you want. However, I do not need to give you or him an alibi – in fact, as allegations were made about me, they must be substantiated with fact and not fiction. As I have stated before, it is not for me to prove anything but for him to prove his lies. Regards, Eeben"[13] 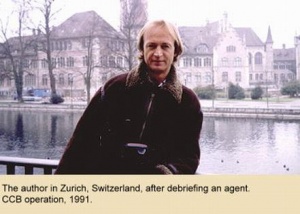 Eeben Barlow in Zurich, Switzerland after debriefing a CCB agent (1991)

The US and Britain were quick to blame Libya for the sabotage of Pan Am 103, but French President Mitterrand - who had refused permission in 1986 for British-based USAF F-111 aircraft to overfly France in a bombing raid on Tripoli and Benghazi - was not convinced.[14]

By mid-September 1989, the shadowy CCB had morphed into the sinister Executive Outcomes (EO) which became the prototype for the sort of private military company (PMC) that would play such a big part in the conflicts at the end of the twentieth and the beginning of the 21st centuries.[15]

Executive Outcomes' first target was the French airliner UTA Flight 772 which exploded over the Sahara Desert in Niger on 19 September 1989. All 155 passengers and 15 crew members died. France eventually accepted that Libya was to blame for the UTA 772 bombing when six Libyans were convicted in a 1999 trial in Paris.[16]

According to Lockerbie campaigner Barry Walker:

"In the 'official' version of events, the UTA 772 case demonstrates a pattern of Libyan behaviour. For some who dispute Libyan responsibility for Lockerbie there is also a suspicion that evidence in the UTA 772 case was manipulated to implicate Libya, perhaps even to ensure French support, as a permanent member of the UN Security Council, for sanctions."[17]

UN Security Council Resolution 748, adopted unanimously on 31 March 1992, introduced mandatory sanctions calling upon Libya to comply with requests to hand over two Libyan suspects in the destruction of Pan Am Flight 103 over Lockerbie on 21 December 1988 and to cooperate with the investigation of the sabotage of UTA Flight 772 over Niger on 19 September 1989.[18]