EgyptAir Flight 804 was a regularly scheduled international passenger flight from Paris Charles de Gaulle Airport to Cairo International Airport, operated by EgyptAir. On 19 May 2016 at 02:33 Egypt Standard Time (UTC+2), the Airbus A320 crashed into the Mediterranean Sea, killing all 56 passengers, 3 security personnel, and 7 crew members on board.

Not mentioned at all in corporate media, is the fact that the incident happened in the same area and at the same time as the military exercise Phoenix Express 2016. A significant amount of claims in the news stories of the incident, mostly in the French press, were later denied Egyptian authorities, indicating the possibility of deliberately inserted red herrings as a distraction.

Also Israel did missile tests in the Mediterranean the day before the incident, as verified by a YouTube video published on 18 May 2016.[1] The news reports of this testing have been scrubbed from the internet.

No mayday call was received by air traffic control, although signals that smoke had been detected in one of the aircraft's lavatories and in the avionics bay were automatically transmitted via ACARS shortly before the aircraft disappeared from radar. The last communications from the aircraft prior to its submersion were two transmissions from its emergency locator transmitter that were received by the International Cospas-Sarsat Programme. Per 2021, the cause of the disaster is still under investigation.

Debris from the aircraft was found in the Mediterranean Sea approximately 290 km (180 mi) north of Alexandria. Nearly four weeks after the crash, several main sections of wreckage were identified on the seabed, and both flight recorders were recovered in a multinational search and recovery operation. On 29 June, Egyptian officials announced that the flight data recorder data indicated smoke in the aircraft, and that soot plus damage from high temperatures was found on some of the wreckage from the front section of the aircraft.[2]

In August 2016, French foreign minister Jean-Marc Ayrault criticised the fact that no further explanation for the reasons behind the crash had been given.[3] In December 2016, Egyptian officials said traces of explosives were found on the bodies[4] but in May 2017, French officials denied that.[5] On 6 July 2018, France's BEA stated that the most likely hypothesis was a fire in the cockpit that spread rapidly.[6]

A manslaughter investigation was started in France in June 2016; in April 2019 a report commissioned as part of the investigation stated the aircraft was not airworthy and should have never taken-off: recurring defects had not been reported by the crews, including alerts reporting potential fire hazards.

According to Greek military radar data, Flight 804 veered off course shortly after entering the Egyptian Flight Information Region. At an altitude of 37,000ft, the aircraft made a 90-degree left turn, followed by a full circle right turn, and then began to descend. Radar contact was lost at an altitude of about 10,000ft.[7][8]

According to Greek military radar data, Flight 804 veered off course shortly after entering the Egyptian flight information region. At Flight Level 370 (about 37,000 ft (11,300 m) in altitude), the aircraft made a 90-degree left turn, followed by a 360-degree right turn, and then began to descend sharply. Radar contact was lost at an altitude of about 10,000 ft (3,000 m).[9][10] This information was later denied on 23 May by an Egyptian official from the National Air Navigation Services Company, who stated there was no change in altitude and no unusual movement before the aircraft disappeared from radar.[11] On 14 June, Egyptian authorities confirmed the statements made by Greek officials.

On 19 May, Greece's Ministry of National Defence reported that it was investigating the report of a merchant ship captain who claimed to have seen a "fire in the sky" 240 km (150 mi; 130 nmi) south of the island of Karpathos.[12]

Shortly after the disappearance, the French government began to investigate whether there had been a security breach at Paris Charles de Gaulle Airport.[13]

All times are UTC.

Seven messages sent via the Aircraft Communications Addressing and Reporting System (ACARS) had been received from the aircraft between 02:26 and 02:29 local time;[14] contact was lost four minutes later at 02:33.[14][15] The data, confirmed by France's Bureau of Investigations and Analysis,[16] indicates that smoke may have been detected in the front of the airliner—in the front lavatory and the avionics bay beneath the cockpit.[15][17] Smoke detectors of the type installed on the aircraft can also be triggered by the condensation of water vapour, producing fog, in the event of a sudden loss of pressure inside the cabin. The aircraft's optical smoke detectors have been deemed more reliable than older models on Airbus aircraft, as they produced fewer false warnings, but were sensitive to dust and some aerosols.[18] The three windows mentioned in the data are cockpit windows, on the co-pilot's side.[19] The flight control unit (FCU) is a cockpit-fitted unit that the pilot uses to enter instructions into the two flight management guidance computers (FMGC); an FCU 2 fault indicates a loss of connection between the FCU and FMGC number 2. The spoiler elevator computer number 3 (SEC 3) is one of the three computers that controls the spoilers and elevator actuators.[20] Two pilots—one interviewed by The Daily Telegraph, the other writing for The Australian—interpreted the data as possible evidence of a bomb.[21][22]

At 02:36, seven minutes after the last ACARS message and the last ADS-B transmission, two transmissions from the aircraft's Emergency Locator Transmitter (ELT) were received by the international Cospas-Sarsat system. These transmissions indicated that they were initiated in "test" mode, suggesting either an unusual manipulation of the cockpit ELT switch, or an electrical fault in the switch's circuit. The transmissions were received by Cospas-Sarsat's then-experimental MEOSAR system, and subsequent data collection and analyses by the Cospas-Sarsat Secretariat and engineers at France's Centre national d'études spatiales (CNES) were successfully used to calculate the likely point of impact of the flight in the Mediterranean Sea.[23][24][25]

Aviation expert David Learmount of Flight International suggested that an electrical fire could have started in the aircraft's avionics compartment[26] and that the aircrew may have been too distracted to communicate their distress to air traffic control.[27]

On 22 May, the French television station M6 reported that, contrary to official statements, one of the pilots told Cairo air traffic control about smoke in the cabin, and decided to make an emergency descent.[28] Later that day, the report was dismissed as false by the Egyptian Civil Aviation Ministry.[29]

On 24 May, a forensics official from Egypt's investigative team said that the remains of the victims indicated an explosion on board.[30] The head of forensics denied the claim.[31]

At the beginning of June, France 3 and Le Parisien reported that the aircraft had performed three emergency landings in the hours before the crash—at Asmara, Tunis, and Cairo—followed by technical inspections, after ACARS messages "signalled anomalies on board shortly after takeoff from three airports".[32][33] On 2 June, Safwat Musallam, EgyptAir's chairman, denied the report.[32]

With investigations into the crash ongoing, Egyptian officials announced on 29 June that data recovered from the flight data recorder, as well as recovered wreckage from the plane, indicated that smoke had occurred on the aircraft, which matched previous information relayed by the plane's automated systems (ACARS).[2] Egyptian Civil Aviation Ministry experts have suggested that wreckage from the front section indicates high temperature combustion.[2][34] Also, the data showed that the flight data recorder recorded the smoke and fault alarms at the same moment that the aircraft's ACARS relayed messages about them to the ground station, and that the data recorder stopped recording at an altitude of 37,000 ft (11,300 m) above sea level.[35][36][37] Media reported that data from the cockpit voice recorder indicated one of the pilots had tried to extinguish the fire in the cockpit before the airplane crashed.[38] However, after these reports were released, the Egyptian Civil Aviation Authority urged "media to be cautious while issuing press releases about the accident and to only rely on official reports issued by the committee itself."[39] Later, on 16 July, the committee confirmed that the cockpit voice recording mentioned "the existence of a fire".[40]

On 22 July, investigators privately suggested that the aircraft might have broken up in mid-air.[41]

On 17 September 2016, Reuters relayed a 16 Sep report from the French news outlet Le Figaro that French forensic investigators visiting Cairo noted traces of the explosive TNT on the aircraft debris. According to Le Figaro's source, Egypt proposed a joint report with France announcing the discovery of evidence of an explosive, but France declined, alleging that Egyptian judicial authorities did not allow the French investigators "to carry out an adequate inspection to determine how the traces could have got there".[42]

On 15 December 2016 Egyptian investigators announced that traces of explosives had been found on the victims, although a source close to the French investigation expressed doubts about Egypt's latest findings.[43][44] On 13 January 2017, French newspaper Le Parisien published an article claiming that unspecified "French authorities" believed the aircraft might have been brought down by a cockpit fire caused by an overheating phone battery; it noted parallels between the position where the co-pilot had stowed his iPad and iPhone 6S and data that suggested an accidental fire on the right-hand side of the flight deck, next to the co-pilot.[45]

On 7 May 2017, French officials stated that no traces of explosives had been found on the bodies of the victims.[5]

On 6 July 2018, France's BEA stated that the most likely hypothesis was a fire in the cockpit that spread rapidly.[6] 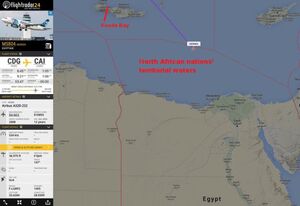 At the same time as the accident, maritime forces from Europe, North Africa, and the United States began the tenth iteration of the multinational maritime Exercise Phoenix Express, on 17 May 2016. Phoenix Express 2016, sponsored by AFRICOM and facilitated by US Naval Forces Europe-Africa/US Sixth Fleet, is was an exercise "designed to improve regional cooperation, increase maritime domain awareness information-sharing practices, and operational capabilities to enhance efforts to achieve safety and security in the Mediterranean Sea."[46][47]

The exercise control group will be hosted at the NATO Maritime Interdiction Operations Training Center (NMIOTC) located in Souda Bay, Greece but training took place throughout the Mediterranean to include North African nations' territorial waters.

This page imported content from Wikipedia on 20 April 2021.
Wikipedia is not affiliated with Wikispooks.   Original page source here
Retrieved from "https://wikispooks.com/w/index.php?title=EgyptAir_Flight_804&oldid=212987"
Categories: