EgyptAir Flight 990 (MS990/MSR990) was a regularly scheduled flight from Los Angeles International Airport, United States, to Cairo International Airport, Egypt, with a stop at John F. Kennedy International Airport, New York City. On 31 October 1999, the Boeing 767 operating the route crashed into the Atlantic Ocean about 60 miles south of Nantucket Island, Massachusetts, killing all 217 people on board. The NTSB concluded this was a deliberate act, the ECAA disputed this conclusion.

The Egyptian Civil Aviation Authority (ECAA) lacked the resources of the US National Transportation Safety Board (NTSB), so the Egyptian government requested the NTSB to handle the investigation. Two weeks after the crash, the NTSB proposed handing the investigation over to the Federal Bureau of Investigation, as the evidence suggested that a criminal act had taken place and that the crash was intentional rather than accidental. 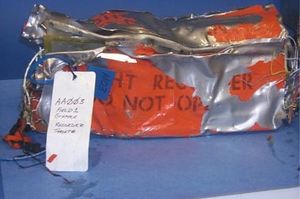 The official probable cause of the crash was found to be a deliberate act by the relief first officer.[1][2]

The ECAA then reversed its decision and launched its own investigation, which concluded that the accident was caused by mechanical failure of the aircraft's elevator control system.

Given the number of Boeing a Boeing 767 flights crashing under similar circumstances, the US investigation might have been a cover-up to hide badly designed aircraft electronics.[citation needed]

The flight had an unprecedented 33 members of the Egyptian General Staff, contrary to standard operating procedure.[citation needed] There were those who opined that it was an action (and potentially a conspiracy) of Muslims or that the Mossad had targeted them.[3]