Ella Rose is the former Director of the Jewish Labour Movement and employee of the Israeli embassy in London.[1] She is now Public Affairs Manager with the Holocaust Educational Trust, equalities officer with the JLM and an activist prominent in the promotion of Israel and its interests inside the UK Labour Party.

Since infamy in the documentary, she has become involved in LGBT Labour organisation. In December 2021, she was made a Labour candidate for the 2022 local elections, where Labour took control of Barnet London Borough Council for the first time ever.[2] She was elected in Whetstone Ward.[3][4]

Ella Rose featured in the 2017 Al Jazeera documentary 'The Lobby'.[5]

"Here is Ella Rose of #Labour Party allegedly verbally threatening violence against Black woman Jackie Walker. Others have been expelled for Less." The Al Jazeera video reported Ella Rose as saying she had done Krav Maga, a hand to hand combat technique developed by the Israeli military, and "would take the tiny (5ft 2in) Jackie Walker".[6]

"Congratulations to Ella Rose, former Israeli embassy employee and star of Panorama and 'The Lobby' who has been accepted on to Labour's ‘Future Candidates Programme’"[8]

Replying to @DonahueRogers "Presumably a recipient of some of that £700,000 of members money that Starmer needlessly threw at the Panorama 'whistleblowers'. Also, mentioned in "Labour Leaks",[9] so possibly one of the 27 suing Labour for the data leak."[10] 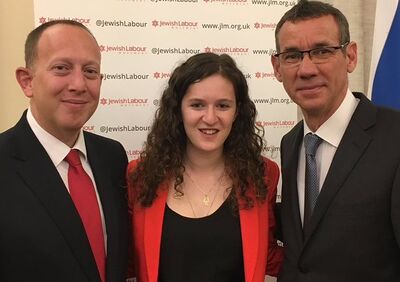 [4] "Here’s JLM’s then director & former Israeli embassy employee Ella Rose, calling her critics 'f***ing anti-Semites'. Ofcom agreed that our secret filming of her was in the public interest. Last week @BBCPanorama presented her as an unnamed whistleblower. #IsLabourAntiSemitic"[11]

Replying to @OriginalKooLaLa and @DonahueRogers "The absolute state of her. If the Labour Party thinks she's a fit & proper person to put forward as a candidate then they have serious, serious problems."[12]

In May 2022, she was elected a Labour councillor in Barnet. She said that Labour is no longer anti-Semitic like it was under Jeremy Corbyn.[13]