Fethullah Gülen was an ally of Turkish President Recep Tayyip Erdoğan before 2013. The alliance was destroyed after the 2013 corruption investigations in Turkey.[1][2][3][4][5] Erdogan accused Gülen of being behind the corruption investigations.[6] He is currently on Turkey's most-wanted-terrorist list and is accused of leading what the current Turkish officials call the Gulenist Terror Organisation (FETÖ).[7] A Turkish criminal court issued an arrest warrant for Gülen.[8][9] Turkey is demanding the extradition of Gülen from the United States.[2][10][11] However, U.S. figures in general do not believe he is associated with any terrorist activity, and have requested evidence to be provided by the Turkish Government to substantiate the allegations in the warrant requesting extradition.[12][13][14]

Sibel Edmonds explains how Fethullah Gülen brought into the United States during the Clinton Administration, and how Bill Clinton’s White House, the State Department and the US Justice Department’s Janet Reno provided the him and his "terrorism"-heroin operations with blanket immunity and protection.[15] 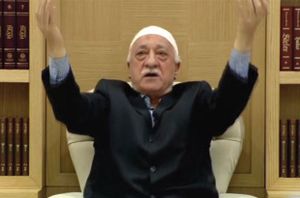