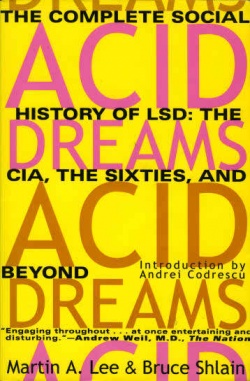 “We do not see things as they are, we see them as we are.” —Old Talmudic saying

★ Start a Discussion about this document
Acid Dreams

Introduction: Whose Worlds Are These?

In June 1967 the Candyman burst through the door of my pad on Avenue C on New York's Lower East Side. He always burst through the door because that was his style. He could barely contain himself. He dropped his mirrored Peruvian bag on the kitchen table and exclaimed: "Just for you! Czech acid!" The Candyman always had some new kind of acid. That month I had already sampled Window Pane and Sunshine. I didn't know if my system could handle another extended flight to the far reaches. But this Czech acid was different. For one thing, it revealed to me that the entire molecular and submolecular structure of the universe was in fact composed of tiny sickles and hammers. Billions and billions of tiny sickles and hammers shimmered in the beauteous symmetry of the material world. I always thought of this particular "commie trip" as a rather private experience brought about by my having been born and raised in Communist Romania, where sickles and hammers were ubiquitous and unavoidable. I did not doubt what I had seen, but I did doubt whether there was such a thing as Czech acid for the simple reason that Czechoslovakia, like Romania, was a monochromatic world. It seemed clear that if acid had existed in Eastern Europe it would have brought about the collapse of communism there, just as it was bringing about the downfall of a certain kind of dour-faced, simple-minded America. And at that time it didn't look like communism was anywhere near collapse. Well, I was wrong. Reading this extraordinary, superbly researched, suspenseful history of LSD, I find, on page 115, that: "In September 1965 Michael Hollingshead returned to his native London armed with hundreds of copies of the updated Book of the Dead and five thousand doses of LSD (which he procured from Czech government laboratories in Prague)." And communism did collapse, though not right then, and acid did have quite a bit to do with it. Charter 77, the Czech human rights organization, was founded by Vaclav Havel in defense of the Plastic People of the Universe, a psychedelic band inspired by the Velvet Underground. Havel himself was in New York in 1968, listening to the Velvets and dreaming, no doubt, of a way out of Cold War ideology.

This tiny revelation is but a parenthetical remark in a story full of surprises, many of which are profoundly unsettling. The drug that connected so many of us to the organic mystery of a vastly alive universe turns out to have been, at least in the beginning, a secret CIA project to find a truth serum. It's frightening to think that CIA spooks have used LSD with electroshock and torture to get information out of prisoners. It's even more frightening that they have used it themselves to little positive effect. Or perhaps not. It's ironic and still scary to think that the CIA tried to control the LSD experiment even though hundreds of thousands were turning on in the heyday of the sixties. Neither the ironies nor the chilling implications stop here. The authors have plowed through thousands of pages of declassified intelligence material to reveal a complex tissue of connections between secret government agencies and the academic world on the one hand, and between the Utopian hopes of a generation and the machinations of those same agencies on the other. It's a riveting story that makes the most paranoid and outlandish theories of the sixties seem insufficiently paranoid.

At the same time, in a most persuasive and closely argued way, this sharply documented chronicle tells the story of the fantastic characters of acid: Captain Al Hubbard, Aldous Huxley, Timothy Leary, Owsley, Art Kleps, Ken Kesey, and many, many more. One is quickly immersed in the vibrant collective aura of the times, which, in spite of the CIA and army intelligence, managed to change America forever. The undeniably metaphysical window that LSD opened for so many of us may have unwittingly been opened by those whose interests lay in keeping it shut. It may well be that, seeing their mistake, they have been endeavoring to close it ever since. But the fact is that the brilliant glimpse of a living cosmos did pour through for a while, and it resulted in an unprecedented vision of a different world. One could debate forever the question of how much of what the drug did for us was contingent on the peculiar conditions of that time. The opening, however, was real. The usefulness of Acid Dreams goes beyond nostalgia. In researching the effect of LSD on the psychology, sociology, and politics of the sixties, the authors have given a context to the mythos and poetry that now permeate almost every aspect of high and low American culture. For believers in capital C Conspiracy this book should prove a rich mine for reflection. For those, like myself, who believe that conspiracy and control are games that vanish once one ceases to believe in them, this book stands as a much-needed corrective. To history buffs, this is fascinating history. Best of all, this is a thriller about the great mystery of how we of a certain generation got to be who we are.