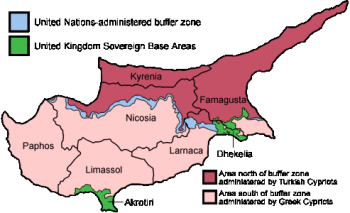 This arrogant but perhaps realistic assessment by the US Ambassador in Nicosia sets the stage for what follows in this brief report. Comprising 254 sq km or approximately 3% of Cyprus territory, the so-called Sovereign Base Areas are probably the most important Western Intelligence listening post in the Eastern Mediterranean, monitoring communications in the Middle East, North Africa, the Balkans, Russia and beyond. Cyprus has also been a staging point for various UK-US Intelligence and military operations, one of the earliest being the overthrow of Iran’s Prime Minister Mohammad Mossadegh in 1953 in the now infamous Operation AJAX.2 Until very recently RAF Akrotiri was actively involved in the reconnaissance and air support of the war in Libya, as part of Operation Ellamy...