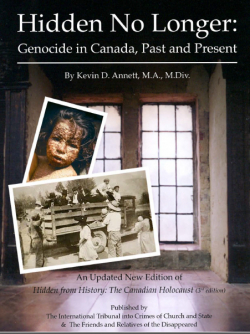 Genocide in Canada past and present

An updated Edition of:

This book is dedicated to the more than 50,000 children who died in “Indian residential schools” operated jointly by the government of Canada and the Roman Catholic, Anglican and United Church of Canada – and to those who continue to suffer and die from the consequences of these crimes.

The stories, documentation and other evidence in this book are based in part on the living testimonies of nearly three hundred survivors of thirty eight separate Indian residential or hospitals across Canada. These accounts were offered freely and unconditionally in open public forums, or in private interviews, between December 1995 and July 2010.

Full permission to quote and re-print these accounts was obtained from every contributor, in either writing or on video. This evidence is held in trust by The International Tribunal into Crimes of Church and State, through the common consent of the survivors themselves.

All documents, letters, photos and other evidence were obtained from public records of the Department of Indian Affairs (the RG 10 series) held in the microfilm section of the Koerner Library, University of British Columbia, from newspaper archives, and from the public internet or private collections.

I wish to thank and honor all of the survivors of Indian residential schools for their courage and willingness to speak out, by which the world has learned about the genocide inflicted upon them, their nations, and the land.

And may we equally honor and acknowledge the untold tens of thousands of children who suffered and died in the Christian death camps, and who still await recognition - so that their memory may never fade, and their murderers may one day face justice.

I’m Irene Favel. I’m seventy five. I went to residential school in Muscowequan from 1944 to 1949, and I had a rough life. I was mistreated in every way.
There was a young girl, and she was pregnant from a priest there. And what they did, she had her baby, and they took the baby, and rapped it up in a nice pink outfit, and they took it downstairs where I was cooking dinner with the nun. And they took the baby into the furnace room, and they threw that little baby in there and burned it alive. All you could hear was this little cry, like “Uuh!”, and that was it. You could smell that flesh cooking.

If James Joyce is right, and history is a nightmare from which we are trying to awaken, then it is also true that victory belongs to those who can remember.

Twenty years ago, soon after my ordination as a clergyman in the United Church of Canada, I first began to hear stories of what my church had done to innocent children in its Indian residential schools. Like most people, I didn’t believe the accounts of murder and torture I was hearing. And if I had have kept my ears and heart closed to these tales, I would have been spared an enormous personal loss and liberation.

But fate, and choice, forced me not only to listen, but give voice and a platform to hundreds, and then thousands of indigenous men and women whose stories you will read in these pages. And as a result, the face of Canada has been changed forever.

But the ones you won’t hear from are the more than 50,000 children who died from beatings, starvation, rape and torture, or being deliberately exposed to tuberculosis and left to cough their lives away in squalor and terror: all at the hands of Christian men and women who have never been prosecuted for their crimes.

These murdered children lie in nearly-forgotten graves across Canada, or their ashes are scattered on sea and land after they were incinerated in residential school furnaces, to hide the crime that killed them. But they have not vanished, and their day is coming, thanks in part to the work and campaigns associated with this book.

I wrote the first version of this book ten years ago now, at a time when nobody in Canada, or anywhere else, was publicly talking about murdered children at Indian residential schools. Now, if not respectable, at least the issue has become a matter of some discourse, even in the cloistered and censoring halls of academia and government.

But what’s most remarkable about the revelation of this “little matter of genocide” is that it’s occurred in the face of enormous opposition and repression: the kind that, until now, has ensured that those slaughtered children would remain out of sight and mind.

I thank my own persistence for this miracle, and the courage of survivors who have stepped forward to tell the truth and indict the guilty, despite the efforts of all the King’s Men and their self-appointed “truth and reconciliation commissions” to protect the perpetrators and silence the witnesses.

But the miracle hasn’t stayed confined to Canada. This past year, the truth of the Canadian Holocaust has finally won a hearing among politicians and media in Europe, and men and women in America, Ireland, England, Australia and elsewhere who have suffered identical tortures from the Roman Catholic Church and others, and who have faced the same obstacles to justice and fill disclosure.

The truth is that the same culture of religious conquest that caused the residential school inferno in Canada swept across Europe centuries before Columbus ever set foot in the Americas - and only now is the world tearing the mask off the lie that murdered so many millions of people in the name of Jesus Christ.

Protesting recently with survivors of brutal Catholic orphanages and sweatshops outside the Irish Parliament, or in vigil for the disappeared at the Vatican under the harassing stare of the Italian state police, I finally began to realize the enormity of what I have been uncovering since 1995 - and how many souls now look to this work and to my efforts.

What I am part of now is a centuries old epic battle to recover the soul of my own people, and overturn the lie in Christian garb that has caused more suffering and death than any institution in human history. For the genocide of native people in Canada and the Americas is part of the same mad sickness that destroyed traditional peoples across Europe, Africa, Australia and Asia – and which now threatens the life of our planet, and our species.

At the risk of being misunderstood, I would venture to call this battle a spiritual one, for behind the beguiling appearance of things lies an older and untold story about how it is that we came to conquer, mutilate and destroy one another, again and again: and the unseen forces that are responsible.

In 1987, a defrocked priest named Fidel who labored among Mayan refugees, and who was eventually killed by a landowner’s gunman in Chiapas, Mexico, told me that, like him, I would one day have to choose between Christ and the church; and that in that choice, whenever I was confused, I should simply go to the poorest child and ask her what I should do.

I’ve tried to do so, and honor the fallen and the still suffering children whom we call aboriginal, in preparing this book. But my effort will mean but a struggling seed unless it finds soil in the minds and will of you, the readers, who must act on the responsibility given to you by what you will learn in these pages.

It isn’t an easy task, to peer beneath the appearance of things into the awful truth, and be changed by what you encounter. It’s simply a necessary one. And I hope that the knowledge in these pages will equip and inspire you to engage in this battle to stop the slaughter of the innocents, and bring an end to the reign of those and that which is causing these crimes.

The following 3 pages uses this file: