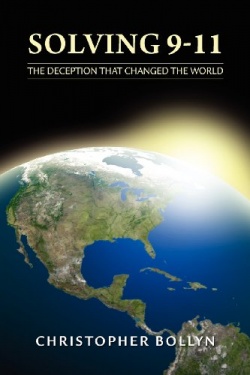 An EBook on the events of 9/11 by Christopher Bollyn

The Deception that Changed the World

From the Book Foreword

Truth Marches On By Glen Stanish

September 11, 2001, much like December 7, 1941, is a day that will live in infamy. The post 9-11 period is one of the saddest times in American history. It has, however, provided the American people a slow and painful awakening of sorts. As an airline pilot for American Airlines, the attacks of 9-11 hit very close to home. I was in the middle of a four-day trip on a layover in downtown Fort Worth on 9-11. Like many Americans that day, I woke up to the news of the devastating attacks. And, like most Americans, for a brief period after the attacks I was in a state of shock and awe. Very shortly after the attacks we were informed by our elected leaders and the media that we had been attacked by Osama Bin Laden and Al Qaida because they didn‘t like our freedoms. Simple enough, but lacking a plausible political motive. For those who think a bit further than what we‘re told and deeper about the causes of war - greed in a word - this explanation was hard to accept. It was as if President George W. Bush had given us a square peg, and no matter how hard we tried, we could not make it fit into the proverbial round hole. I suspect that the author of this book, Christopher Bollyn, may have experienced this same thought process. My own personal discovery of the truth of 9-11 began with Bollyn. I had been subscribing to a newspaper, American Free Press, where he had been a regular contributing reporter. I had enjoyed reading Bollyn‘s articles, appreciating his thorough research and open and honest candor. It was shortly after 9-11, when I was reading one of Bollyn‘s articles about the scene of the crash of United Airlines Flight 93 in Shanksville, Pennsylvania. He described how many eyewitnesses, including the mayor of Shanksville, reported never seeing any wreckage of a Boeing 757, saying things like there was no smoke or fire, no pieces of airframe, things along these lines. Other reports that quoted the coroner on the scene said there were no bodies or body parts. While reading these reports, I could not reconcile them with the usual scenes of airline accidents.

The following page uses this file: