Gavrilo Princip was a Bosnian Serb member of Young Bosnia who sought an end to Austro-Hungarian rule in Bosnia and Herzegovina. At the age of 19, he assassinated Archduke Franz Ferdinand of Austria and the Archduke's wife, Sophie, Duchess of Hohenberg, in Sarajevo on 28 June 1914. Princip and his accomplices were arrested and implicated as a nationalist secret society, which initiated the July Crisis and led to the outbreak of World War I.

At his trial, Princip stated that: "I am a Yugoslav nationalist, aiming for the unification of all Yugoslavs, and I do not care what form of state, but it must be freed from Austria."[1] Princip was sentenced to twenty years in prison, the maximum for his age, and was imprisoned at the Terezín fortress. He died on 28 April 1918 from tuberculosis exacerbated by poor prison conditions which had already caused the loss of his right arm.

Gavrilo Princip was born in the remote hamlet of Obljaj, near Bosansko Grahovo, on Template:OldStyleDate. He was the second of his parents' nine children, six of whom died in infancy. Princip's mother Marija wanted to name him after her late brother Špiro, but he was named Gavrilo at the insistence of a local Eastern Orthodox priest, who claimed that naming the sickly infant after the Archangel Gabriel would help him survive.[2]

A Serb family, the Princips had lived in northwestern Bosnia for many centuries[3] and adhered to the Serbian Orthodox Christian faith.[4] Princip's parents, Petar and Marija (née Mićić), were poor farmers who lived off the little land that they owned.[5] They belonged to a class of Christian peasants known as kmeti (serfs), who were often oppressed by their Muslim landlords.[6]

Petar, who insisted on "strict correctness," never drank or swore and was ridiculed by his neighbours as a result.[5] In his youth, he fought in the Herzegovina Uprising against the Ottoman Empire.[7] Following the revolt, he returned to being a farmer in the Grahovo valley, where he worked approximately 4 acres (1.6 ha; 0.0063 sq mi) of land and was forced to give a third of his income to his landlord. In order to supplement his income and feed his family, he resorted to transporting mail and passengers across the mountains between northwestern Bosnia and Dalmatia.[8]

Despite Petar's opposition, Gavrilo Princip began attending primary school in 1903, aged nine. He overcame a difficult first year and became very successful in his studies, for which he was awarded a collection of Serbian epic poetry by his headmaster.[7] At the age of 13, Princip moved to Sarajevo, where his elder brother Jovan intended to enroll him into an Austro-Hungarian military school.[7] However, by the time Princip reached Sarajevo, Jovan had changed his mind after a friend advised him not to make Gavrilo "an executioner of his own people." Princip was enrolled into a merchant school instead.[9] Jovan paid for his tuition with the money he earned performing manual labour, carrying logs from the forests surrounding Sarajevo to mills within the city.[10] After three years of study, Gavrilo transferred to a local gymnasium.[9] In 1910, he came to revere Bogdan Žerajić, a Bosnian Serb revolutionary who attempted to assassinate Marijan Varešanin, the Austro-Hungarian Governor of Bosnia and Herzegovina, before taking his own life.[10] In 1911, Princip joined Young Bosnia (Template:Lang-sr), a society that wanted to separate Bosnia from Austria-Hungary and unite it with the neighbouring Kingdom of Serbia.[9] Because the local authorities had forbidden students to form organizations and clubs, Princip and other members of Young Bosnia met in secret. During their meetings, they discussed literature, ethics and politics.[10] 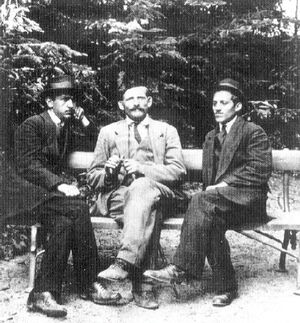 In 1912, Princip was expelled from school for being involved in a demonstration against Austro-Hungarian authorities.[7] A student who witnessed the incident claimed that "Princip went from class to class, threatening with his knuckle-duster all the boys who wavered in coming to the new demonstrations."[11] Princip left Sarajevo shortly after being expelled and made the 280-kilometre (170 mi) journey to Belgrade on foot. According to one account, he fell to his knees and kissed the ground upon crossing the border into Serbia. In Belgrade, Princip volunteered to join the Serbian guerrilla bands fighting the Ottoman Turks, under the leadership of Major Vojislav Tankosić.[12] Tankosić was a member of the Black Hand, the foremost conspiratorial society in Serbia at the time.[9]

At first, Princip was rejected at a recruitment office in Belgrade because of his small stature. Enraged, he tracked down Tankosić himself, who also told him that he was too small and weak.[13] Humiliated, Princip returned to Bosnia and lodged with his brother in Sarajevo. He spent the next several months moving back and forth between Sarajevo and Belgrade. In Belgrade he met Živojin Rafajlović, one of the founders of the Serbian Chetnik Organization, who sent him (along with 15 other Young Bosnia members) to the Chetnik training centre in Vranje.[14] There, they met with school manager Mihajlo Stevanović-Cupara. He lived in Cupara's house, which is today located on Gavrilo Princip Street in Vranje. Princip practiced shooting, using bombs and the blade, after which training was completed and he returned to Belgrade.[15]

In 1913, while Princip was staying in Sarajevo, Austria-Hungary declared a state of emergency, implemented martial law, seized control of all schools, and prohibited all Serb cultural organizations.[12] 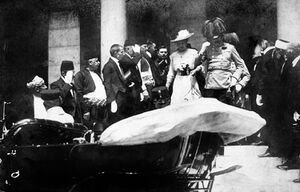 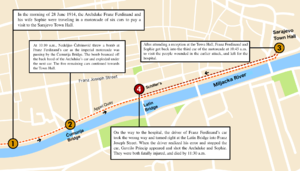 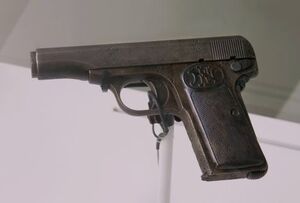 On 28 June 1914, Princip assassinated Archduke Franz Ferdinand of Austria and his wife, Duchess Sophie Chotek. The royal couple arrived in Sarajevo by train shortly before 10 a.m. and rode in the third car of a six-car motorcade towards Town Hall.[16] Their car's top was rolled back in order to allow the crowds a good view of its occupants.[17]

Princip and the five other conspirators lined the route. They were spaced out along the Appel Quay, each one with instructions to assassinate the Archduke when the royal car reached their position. The first conspirator on the route to see the royal car was Muhamed Mehmedbašić. Standing by the Austro-Hungarian Bank, Mehmedbašić lost his nerve and allowed the car to pass without taking action. At 10:15 a.m., when the motorcade passed the central police station, nineteen-year-old student Nedeljko Čabrinović hurled a hand grenade at the Archduke's car. The driver accelerated when he saw the object flying towards him, and the bomb, which had a 10-second delay, exploded under the fourth car. Two of the occupants were seriously wounded.[18] After Čabrinović's failed attempt, the motorcade sped away and Princip and the remaining conspirators failed to act due to the motorcade's high speed.[19]

After the Archduke gave his scheduled speech at Town Hall, he decided to visit the victims of Čabrinović's grenade attack at the Sarajevo Hospital.[20] In order to avoid the city centre, General Oskar Potiorek decided that the royal car should travel straight along the Appel Quay to the hospital. However, Potiorek forgot to inform the driver, Leopold Lojka, about this decision. On the way to the hospital, Lojka incorrectly turned onto a side street where Princip had positioned himself in front of a local delicatessen. After realizing his mistake, Lojka braked and began to reverse. As he did so the engine stalled and the gears locked. Princip stepped forward, drew his FN Model 1910,[21][22] and at point-blank range fired twice into the car, first hitting the Archduke in the neck, and then hitting the Duchess in the abdomen.[23][24] They both died shortly after.[24] 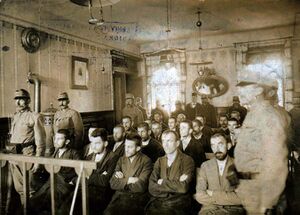 Princip attempted to shoot himself, but the pistol was wrestled from his hand before he had a chance to fire another shot.[25] At his trial, he said he regretted the killing of the Duchess and meant to kill Potiorek, but was nonetheless proud of what he had done.[26][27] He further stated that: "I am a Yugoslav nationalist, aiming for the unification of all Yugoslavs, and I do not care what form of state, but it must be freed from Austria."[1] The Black Hand was implicated in the assassination which led Austria-Hungary to issue a démarche to Serbia known as the July Ultimatum which led up to the outbreak of World War I.[28]

Princip was nineteen years old at the time and too young to receive the death penalty, as he was twenty-seven days shy of the twenty-year minimum age limit required by Habsburg Law.[29] Instead, he received the maximum sentence of twenty years in prison.[30]