George Fisher Baker (March 27, 1840 – May 2, 1931) was an American financier and philanthropist. Known as the "Dean of American Banking," Baker was known for his silence in public.[1] He made a huge fortune after the Civil War in railroads and banking, and at his death he was estimated to be the third richest man in the United States, after Henry Ford and John D. Rockefeller.[2]

Baker was born in Troy, New York, to Eveline Stevens Baker and George Ellis Baker, a shoe-store owner who was elected in 1850 on the Whig ticket to the New York State Assembly. At 14, young George entered S.S. Seward Institute in Florida, New York, where he studied geography, bookkeeping, history, and algebra. At 16, he was hired as the junior clerk in the New York State Banking Department.

Baker did not attend university, but instead enlisted in the 18th Regiment of the Massachusetts Volunteers at the start of the U.S. Civil War, and rose to the rank of first lieutenant and adjutant.[3]

In 1863, Baker, along with his mentor, John Thompson, and Thompson's sons Frederick Ferris Thompson and Samuel C. Thompson, co-founded the First National Bank of the City of New York. The first national bank to be chartered in New York City under the National Currency Act of 1863, it became a forerunner of today's Citibank N.A.[4]

At age 37, Baker became First National's President on September 1, 1877. His 20,000 shares were worth about $20 million. He retired as president in 1909, and became chairman of the board. He was succeeded in the presidency by Francis L. Hine, the former Vice President of the bank.[5]

An avid investor, he held interests in many corporations and was the largest stockholder in the Central Railroad of New Jersey. In addition, he was a director in 22 corporations, which with their subsidiaries had aggregate resources of $7.27 billion. Owning $5,965,000 (equivalent to around $83,245,000 in 2017 dollars) of U.S. Steel stock in the early 1920s, Baker was also the largest individual owner of U.S. Steel stock, according to a May 4, 1924 Time magazine article.

True, he is twice as rich as the original J. P. Morgan, having a fortune estimated at 200 millions. True, at the age of 84 when he has retired from many directorates, he dominates half a dozen railroads, several banks, scores of industrial concerns.

the richest, most powerful and most taciturn commercial banker in U. S. history[6]

A 1934 article in Newsweek describes him as one of the most imposing figures in banking history. In the November 1994 issue of Worth magazine, James Grant, editor of a financial newsletter, calls Baker a hidebound turn-of-the-century banker who always got his loans repaid.

Baker was famously silent in public, never commenting on events or giving interviews, until 1922, at age 82, when he gave his first newspaper interview. Thereafter, he spoke occasionally at luncheons and gatherings.[2]

In 1869, Baker was married to Florence Tucker Baker, a daughter of Benjamin Franklin Baker and Sophronia J. (nee Whitney) Baker. Together, they were the parents of: 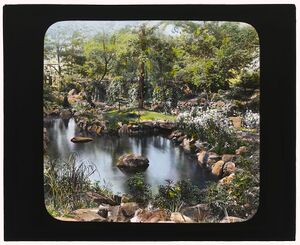 Baker lived on Madison Avenue in New York City, and maintained a summer property on Jekyll Island near Brunswick, Georgia, and had an estate in Tuxedo Park, New York.[1]

In 1929, Baker commissioned the construction of a unique Pierce-Arrow town car for the wedding of his daughter. Built by LeBaron, the car's roof line was 5 inches taller than standard models so Baker could keep his top hat on. Trim lining in the rear compartment is made of 24-carat gold, as are perfume dispensers and an intercom. The car was rediscovered in 1978 in a barn in Ohio alongside a Rolls Royce Boat Tail Speedster formerly owned by Fred Astaire. It is now part of the White Glove Collection in La Crosse, Wisconsin.

Baker provided much of the initial funding for Harvard Business School with a 1924 grant of $5 million,[9] for which Harvard gave him an honorary doctorate and named the library after him.

In 1922, Baker established a $1 million dollar endowment fund for the Metropolitan Museum of Art. Baker had been a member of the museum board since 1909.[10]

Baker donated $2 million to Cornell University for the construction of the Baker Laboratory of Chemistry, as well as Baker dormitories, and he endowed the Baker Lecture Series, the oldest continuous lectureship in chemistry in the United States.

He made other large donations to charitable causes throughout New York City and funded the construction of Baker Field, Columbia University's primary athletic facility. He provided $2 million for Baker Memorial Library at Dartmouth College.[2]