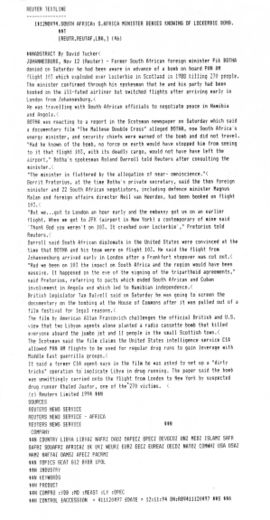 "The flight from Johannesburg arrived early in London after a Frankfurt stopover was cut out and the embassy got us on to an earlier flight. Had we been on Pan Am Flight 103 the impact on South Africa and the region would have been massive. It happened on the eve of the signing of the tripartite agreements," said Pretorius, referring to pacts signed at UN headquarters on 22 December 1988 which ended South African and Cuban involvement in Angola, and which led to Namibian independence. [Emphasis added].

Another statement by Pretorius was in appallingly bad taste:

"The minister is flattered by the allegation of near-omniscience."

Pretorius went on to confirm that "the foreign minister and 22 South African negotiators, including defence minister Magnus Malan and foreign affairs director Neil van Heerden, had been booked on flight 103." He goes on to explain again how the change had come about. "But we… got to London an hour early and the embassy got us on an earlier flight. When we got to JFK (airport in New York) a contemporary of mine said 'Thank God you weren’t on 103. It crashed over Lockerbie.’” [Emphasis added.][3]