Hand in Hand for Syria

Hand in Hand for Aid And Development is a UK registered charity incorporated on 13 February 2012 as Hand in Hand for Syria[1] and its web site was set up on 1 March 2012. Channel 4 reports that it was "formed from within the Syrian diaspora [in 2012] in response to a deteriorating humanitarian crisis in the region"[2]. The organisation came to prominence through "Dr Rola (Hallam)", who was apparently working as a volunteer during an alleged Napalm attack on a school in the village of Orum Alkubra in Aleppo on 26 August 2013.[3] In 2017 it was chosen as "Charity Of The Year" by the Muslim Charities Forum.[4]

Their Facebook page described Hand in Hand for Syria as a "UK Registered charity providing humanitarian support for the people of Syria." Their website states that they work wth the "UN’s OCHA (Office for the Co-ordination of Humanitarian Affairs) to plan the distribution of aid."[5] By September 2016, they were working in Jordan, Syria and Turkey.[6]

According to the UK charity commission, "an organisation cannot be a charity if it has a 'political purpose'."[7] As a UK charity, Hand in Hand for Syria is therefore explicitly prohibited from "furthering the interests of a particular political party" or from "securing or opposing any change in the law, whether in the UK or overseas".[7]

Flag of the Syrian Nation Opposition

As in the case of World for Libya, the charity's logo is clearly intended to display a political affiliation. (See the flag of the Syrian National Opposition - right, above). Both supposedly non-political groups aligned themselves with the aims of the rebel groups. In Spring 2014, when their website was updated, the logo was quietly modified to remove the three red stars and the globe, but the affiliation remains indisputable.

... We announce the formation of the free Syrian army to work hand in hand with the people to achieve freedom and dignity to bring this regime down, protect the revolution and the country’s resources, and stand in the face of the irresponsible military machine that protects the regime.”[8]

Is this congruence of name and FSA objectives just coincidence? Is the name's similarity with World for Libya also just one more coincidence? 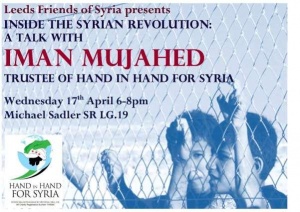 The organisation of Hand in Hand for Syria is unclear. They have claimed to operate 5 different hospitals and support over 140 makeshift hospitals, but they refuse to give out the addresses of their hospitals.[9] They claim to operate a fleet of 32 ambulances, run a permanent blood bank and to train large numbers of medical workers in the treatment of conflict injuries.[10] Yet they have never submitted an annual report to the Charity Commission.

Various non-trustees have claimed trustee status. As of 17 August 2014, there were still only 3 trustees (the founders of the group). As Declan Hayes puts it:

Because of its opaqueness, it is hard to ascertain who exactly is in charge of the Hand in Hand for Syria organisation. Although, for example, Faddy Sahloul is used as the main contact point on the Charity Commission page, which also lists Razan, his (apparent) wife and Fadi al Dairi as the only other two trustees, some others, such as accountant Marwan Ghannam who registered their website (but who is not involved in doing their accounts) also play key roles. Another person who has played a prominent if at times coy role in this group is marble entrepreneur Iman Mujahed...[11]

The group's banking is reportedly done by Razan Zehrawi, a member with a background in decorative arts[12] rather than Marwan Ghannam, a chartered accountant associated with the group.[11] Group members estimates of costs have varied wildly. For example, Fadi al-Dairi has claimed that their employees "are paid around £70-80 a month"[13], a total wage bill of around £7,500 for the 98 employees of their Atareb hospital. This figure sits uneasily with Dr Rola’s estimate of its total running costs of $60-70,000 per month.

In spite of repeated claims of painstaking accounting "even down to the antiseptic"[14], the charity has repeatedly breached the UK Charity Commission's rules for filing its accounts every year since it was started:

Fadi Al-Dairi suggested that the Charity Commission was 'Islamophobic' for asking them to submit their accounts.[16][11]

In 2014, Hand in Hand for Syria launched an appeal for money to equip Atareb Hospital, Aleppo (the hospital from which "Dr Rola" made her dramatic broadcast). Irregularities have been alleged in this regard, since what is described as "a basic hospital funded by handouts" and "a field hospital" appears in fact to be relatively well-equipped, including a kidney dialysis machine, surgical and x-ray facilities.[17]

Relationship to World For Libya

Hand in Hand for Syria has no acknowledged connection to World For Libya, a UK charity registered 8 months earlier. However, the parallels are striking:- both sport a logo indicative of a political affiliation to a rebel group, against which the commercially-controlled media have proposed humanitarian intervention. Moreover, both have been assisted by film maker and medic Dr Saleyha Ahsan.