Harvard Divinity School (HDS) is one of the constituent schools of Harvard University in Cambridge, Massachusetts. The school's mission is to educate its students either in the academic study of religion or for leadership roles in religion, government, and service.[1] It also caters to students from other Harvard schools that are interested in the former field. HDS is among a small group of university-based, non-denominational divinity schools in the United States (others include University of Chicago Divinity School, Yale Divinity School, Vanderbilt University Divinity School, and Wake Forest University School of Divinity). 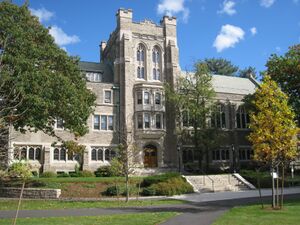 Harvard College was founded in 1636 as a Puritan/Congregationalist institution and trained ministers for many years. The separate institution of the Divinity School dates from 1816, when it was established as the first non-denominational divinity school in the United States. (Princeton Theological Seminary had been founded as a Presbyterian institution in 1812. Andover Theological Seminary was founded in 1807 by orthodox Calvinists who fled Harvard College after it appointed liberal theologian Henry Ware to the Hollis Professorship of Divinity in 1805.)

During its first century, Harvard Divinity School was unofficially associated with American Unitarianism. It also retains a historical tie to one of the successor denominations of American Congregationalism, the United Church of Christ.

Throughout the 18th century, Enlightenment ideas of the power of reason and free will became widespread among Congregationalist ministers, putting those ministers and their congregations in tension with more traditionalist, Calvinist parties.

When the Hollis Professor of Divinity David Tappan died in 1803 and the president of Harvard Joseph Willard died a year later, in 1804, the overseer of the college Jedidiah Morse demanded that orthodox men be elected.

Nevertheless, after much struggle, the Unitarian Henry Ware was elected in 1805, which signaled the changing of the tide from the dominance of traditional, Calvinist ideas at Harvard to the dominance of liberal, Arminian ideas (defined by traditionalists as Unitarian ideas). The appointment of Ware, with the election of the liberal Samuel Webber to the presidency of Harvard two years later, led Jedidiah Morse and other conservatives to found the Andover Theological Seminary as an orthodox alternative to the Harvard Divinity School.

Today, students and faculty come from a variety of religious backgrounds: Christian (all denominations), Jewish, Muslim, Hindu, Buddhist, Sikh, and others. Its academic programs attempt to balance theology and religious studies—that is, the "believer's" perspective on religion with the "secular" perspective on religion. This is in contrast to many other divinity schools where one or the other is given primacy (Yale Divinity School, for example, emphasizes its theological program, while the majority of students at the University of Chicago Divinity School enroll in its "religious studies" Master of Arts program).

In April 2014, the faculty of HDS voted to suspend admission to its Doctor of Theology (Th.D.) program, although students already enrolled in the Th.D. program were allowed to complete their degrees.[2] Instead, doctoral students pursue Doctor of Philosophy (Ph.D.) degrees under the auspices of the Committee on the Study of Religion, which is made up of 50% Arts and Sciences and 50% Divinity faculty members and housed in the Harvard Faculty of Arts and Sciences.[3]