Robert Hunter Biden is an American lawyer and investment advisor, and more importantly for his career, the second son of former US Vice President Joe Biden.

After law school, Biden accepted a position at bank holding company MBNA America, a major contributor to his father's political campaigns. By 1998, Biden had risen to the rank of executive vice president, and left to serve at the United States Department of Commerce until 2001, focusing on ecommerce policy Biden became a lobbyist in 2001, co-founding the firm of Oldaker, Biden & Belair. In 2006, Biden and his uncle James Biden attempted to buy hedge-fund group Paradigm, but the deal never materialized. That same year, Hunter Biden was appointed to a five-year term on the board of directors of Amtrak by President George W. Bush. Biden was the board's vice chairman from July 2006 until 2009; he resigned in February 2009, leaving both roles shortly after his father became vice president.

In September 2008, Biden launched a consultancy company named Seneca Global Advisors that offered to help companies expand into foreign markets. Biden, Devon Archer, and Christopher Heinz founded the investment and advisory firm Rosemont Seneca Partners in 2009. He also founded venture capital firm Eudora Global. He held the position of counsel in the law firm Boies Schiller Flexner LLP in 2014. He was director on the Board of the Center for National Policy, the Truman National Security Project and the US Global Leadership Coalition. Biden is Member of the CSIS Executive Council on Development, the Chairman’s Advisory Board for the National Democratic Institute, and the President’s Advisory Board for Catholic Charities in Washington D.C. 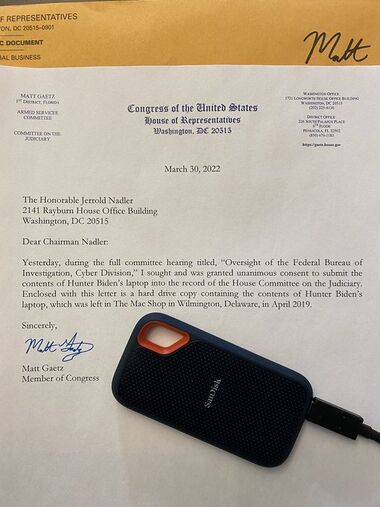 The content of the hard drive was entered into the congressional record by Matt Gaetz on March 30, 2022.[2][3]

In October 2020, the New York Post obtained a large number of emails and documents when 3 laptops allegedly belonging to Hunter Biden were left at a Delaware repair shop with water damage and never picked up, allowing the repair shop owner to access its contents and then turn them over to both the FBI and a lawyer for Trump advisor Rudy Giuliani.

"Isaac [the repair shop owner] said the man who he believes to be Hunter Biden dropped off three laptops at his store in April 2019, only one of which was salvageable. While repairing the laptop, Isaac said he discovered disturbing material."[4]

The laptop contents suggest Joe Biden was using his power to benefit his son’s business Ukrainian associates, and allowing his name to be traded on while Vice President for his son and brother to pursue business opportunities in China. [5] Some texts and emails state that Hunter was adamant that any discussions about the involvement of the Vice President be held only verbally and never put in writing.

Hunter Biden served on the board of Burisma Holdings, a major Ukrainian natural gas producer, from 2014 to 2019. With no knowledge of Ukraine and no experience in the energy industry, he received $50,000 a month. U.S. banking records show Hunter Biden’s American-based firm, Rosemont Seneca Partners LLC, received regular transfers into one of its accounts — usually more than $166,000 a month — from Burisma from spring 2014 through fall 2015, during a period when Vice President Joe Biden was the main U.S. official dealing with Ukraine.[7]

In March 2016, VP Joe Biden arranged for the firing of the prosecutor that was leading a wide-ranging corruption probe into Burisma Holdings[8][9]. Joe Biden threatened Ukrainian President Petro Poroshenko that the Obama administration would pull $1 billion in U.S. loan guarantees, sending Ukraine toward insolvency, if it didn’t immediately fire Prosecutor General Viktor Shokin[10]. At a Council on Foreign Relations event Joe Biden said: “I said, ‘You’re not getting the billion.’ I’m going to be leaving here in, I think it was about six hours. I looked at them and said: ‘I’m leaving in six hours. If the prosecutor is not fired, you’re not getting the money,’” Biden recalled telling Poroshenko...“Well, son of a bitch, he got fired. And they put in place someone who was solid at the time.”

A document detailing Hunter Biden’s purported connections to the Chinese Communist Party was released a few weeks before the 2020 election, but its provenance.[11] and reliability is unclear.[citation needed]

Biden's application for a position in the U.S. Navy Reserve was approved in May 2013[12]. At age 43, Biden was accepted as part of a program that allows a limited number of applicants with desirable skills to receive commissions and serve in staff positions. Biden received an age-related waiver and a waiver due to a past drug incident; he was sworn in as a direct commission officer. VP Joe Biden administered his commissioning oath in a White House ceremony.

The following month, Biden tested positive for cocaine during a urinalysis test and was subsequently discharged administratively. Biden attributed the result to smoking cigarettes he had accepted from other smokers, claiming the cigarettes were laced with cocaine. He chose not to appeal the matter as it was unlikely that the panel would believe his explanation given his history with drugs and also due to the likelihood of news leaking to the press.

All in the Family

"....Delaware senator Joe Biden's son, R. Hunter Biden, provides another example: In 2003, The New York Times reported, he joined MBNA America Bank, the huge credit card empire, as a management trainee after graduating from Yale Law School. He moved up the ladder, becoming executive vice president, and now is a partner of Oldaker, Biden & Belair, a D.C. lawyer-lobbyist shop. In that capacity during 2003, he got a $100,000 annual retainer from MBNA to advise the company on 'the Internet and privacy law.'

"As it turns out, MBNA is Senator Biden's biggest contributor. According to the Center for Responsive Politics, Biden raised $147,700 from MBNA employees from 1999 to 2004. MBNA's ties to the Bidens might seem ironic since the firm is usually viewed as a big Republican campaign fundraiser and was George W. Bush's sixth-largest contributor during last year's presidential campaign, with a total of $356,350...."