Ida Eklund-Lindwall is a disinformation analyst having worked for Stefan Löfven's office, STRATCOM, The Swedish Ministry of Defence and the Swedish Civil Contingencies Agency[1]. Her current employer is the European Union External Action Service that operates the Eastern Task Force of STRATCOM. She is also named as a member of the Dutch Cluster of the II, starting employment after a meeting called Answering Russia's Strategic Narratives between NATO, The Dutch Ministry of Defence and, The Institute for Statecraft, Netherlands Organisation for Applied Scientific Research.

Eklund-Lindwall graduated from the University of Stockholm with a degree in conflict and peace studies and human rights in 2007.[2] She worked as a "peacekeeper" in Georgia and a crisis-centre for peace-management. She is noted to be experienced by media-outlets and has mostly been recommended by her employer Amnesty International, her work there appeared to be reporting and visiting victims of war, such as in Palestine.[3]

Answering Russia's Strategic Narratives was a one day event on 22 June 2017 organised by The Hague Centre for Strategic Studies, which described it as a "conference", although it was by invitation only. Reports from the HCSS from after the meeting revealed Stopfake and the East StratCom Task Force granted their database (of files on media sources, individuals and their role in reporting Russian news or interests of Russian media) to the HCSS for an "offensive" to set-up sites and institutes that would "monitor Russian dinformation", seemingly explaining the reason Ida Eklund-Lindwall became part of the Dutch Cluster of the IfS.[4]

She appeared to be travelling the Netherlands around the same time the Dutch Cluster of the II was set-up with an anti-fake news lecture at the University of Amsterdam in 2017, on the topic of fake news along with an anti-fake news campaign by media appearances of her co-speaker Marc Tuters, who linked "a frog using intimidation" and Donald Trump[5] to several social media-outlets with a different view on the official narrative.[6] In April of 2018 she, Stephen Dalziel (a director for the IfS, member of the Institute for Statecraft/Tor team), EU DisinfoLab member Guillaume Chaslot and London School of Economics professor Peter Pomerantsev joined in an "annual disinformation event"-session hosted by DisinfoPortal and the Atlantic Council, named "exposing the Kremlin's toolkit". Andy Pryce and several contacts of the IfS were other panel members in other sessions. Dalziel used the title "Senior Fellow, The Institute for Statecraft" which is quite interesting after the events that led to the Institute for Statecraft/Cover up.[7] 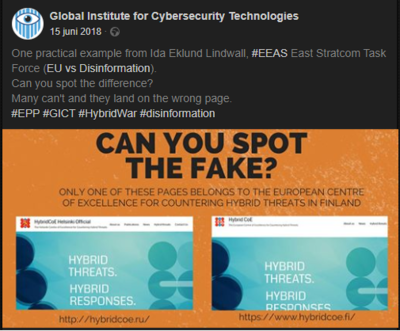 The only difference between these two pages is one of those sites has a Russian internet country code top-level domain. While the site should be a Finnish site, an enemy image is created here as you could easily use a Norwegian vs Finnish domain name.[8]

Eklund-Lindwall is one of 15 members at STRATCOM "aimed at Armenia, Azerbaijan, Belarus, Georgia, Moldova and Ukraine and created as a conclusion of the European Council meeting on 19 and 20 March 2015, with the need to challenge the ongoing disinformation campaigns by Russia", receiving at least €7.000.000 until 2020. The New York Times calls it "Europe's frontline against Russia", with Edward Lucas calling it in a lecture "the best weekly bulletin on Russian propaganda in the West next to StopFake", an organization of fellow II-member Yevhen Fedchenko.[9][10][11] She is also used in election-observation in eastern europe.[12]

Eklund-Lindwall lectures all over Europe on dozens of yearly events on behalf of the Stockholm Network and STRATCOM in the East taskforce directed at Eastern Europe, notably Russia, Hungary and Poland with hosting debate sessions. Most of her sessions are geared towards stopping Russian disinformation and their "influencing of national elections", something Stefan Löfven has been vocal about.[13][14]

In a debate session in 2018 by an Hungarian Pro-EU society, at which she and DisinfoPortal memeber Martin Mycielski were members of the panel, she warned of election meddling citing the 2016 US election as an example of what could happen in the EU as "democracy" would get worse, remarking "fact-checking is not the answer (...) but a component" because "kids are more aware of the problem of what are you sharing and not" and "the middle-aged population that are just sharing whatever they see", something disproved in multiple scientific studies.[15][16] She apparently was pushing for a project where the EU member-states would launch governmental promoted websites all individually monitoring and fact-checking Russian TV-channels. [17]