"Swollen with bodies" was a widely phrase used in May 2021 around the world by corporate media, suggesting that the river Ganges was awash with corpses, implied to be of people dead from Covid. The stories coincided with a worldwide vaccination drive, and hinted darkly at a government cover-up of large scale deaths. By June, the stories went away as suddenly as they came. 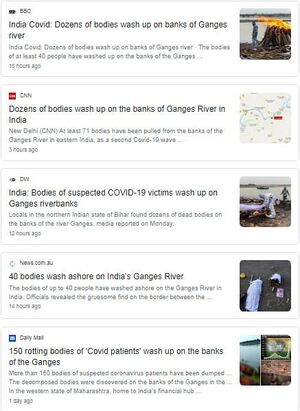 India was overwhelmed by a devastating second wave of the pandemic during April and May 2021. Hundreds of corpses have been found floating in the river or buried in the sand of its banks. Those who live close to where they have washed up fear they are Covid-19 victims.[1]

It has recorded more than 25 million cases and 275,000 deaths, but experts say the real death toll is several times higher. The bodies on the river banks, taken together with funeral pyres burning round-the-clock and cremation grounds running out of space, tell the story of a death toll unseen and unacknowledged in official data.[2]

It is religiously desirable to cremate the body and deposit the ashes into the holy river Gagnes, but the very poor often skip the first step. A cremation can cost a family 7,000 Indian rupees ($109) to burn — over 15 percent of the average Indian’s yearly wage. It’s why many families deposit their recently deceased directly into the Ganges or into a channel that will lead to it.[3][4]

For example, in January 2015 Newsweek told of a similiar discovery: "black crows began to fill the gray sky like wild brushstrokes, so a group of villagers decided to investigate. The birds were circling something, and as the villagers approached they heard the guttural growl of dogs, all teeth and rib cage, scrapping for the last tug of tendon." That’s when they found a floating mass grave of more than 100 corpses washed up in a canal that connects to the Ganges River.[4]

Also left out was that the Covid-19 status of the dead were pure conjecture, and that the cost of cremations had gone up due to the lockdown of the economy.