Institute for Science and International Security

The Institute for Science and International Security (IS&IS) is a nonprofit, non-governmental institution to inform the public about "science and policy issues affecting international security".[1] Based in Washington D.C. and founded in 1993, IS&IS is led by founder and former United Nations IAEA nuclear inspector David Albright.

1. Preventing the spread of nuclear weapons and related technology to other nations and terrorists;

3. Reinforcing the international non-proliferation regime; and,

Explosion at the ICAC 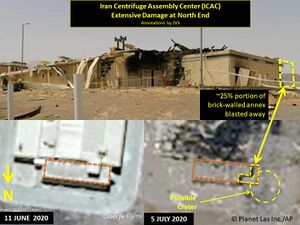 In July 2020, IS&IS reported that a bomb had exploded in the Iran Centrifuge Assembly Centre (ICAC) at the Natanz Enrichment Site (NES) causing significant, extensive, and likely irreparable, damage to its main assembly hall section. Although Iranian national media showed images of the aftermath, the ICAC building appeared to have remained largely intact, albeit it with significant structural damage.

It was not until commercial satellite imagery became available to the IS&IS on 8 July 2020 that the true nature of the damage could be observed. It was clear that a major explosion had taken place, destroying nearly three quarters of the main centrifuge assembly hall, generating a fire that blackened a major portion of the building, the blackening visible where the roof had been blown away by the explosion.[2]

Casually inserted into what was designed to be another anti-Iranian article by the New York Times, is the mention that Israel has just planted a bomb which caused a recent explosion at an Iranian nuclear facility last week. The report hints that Israel was in fact responsible for the attack on the Natanz nuclear plant, although Israel has not officially admitted their role (they never do). Defence Minister Benny Gantz stated during a recent radio interview: “Everyone can suspect us in everything and all the time, but I don’t think that’s correct.”[3]

This page imported content from Wikipedia on 9 July 2020.
Wikipedia is not affiliated with Wikispooks.   Original page source here
Retrieved from "https://wikispooks.com/w/index.php?title=Institute_for_Science_and_International_Security&oldid=191611"
Category: