From Wikispooks
< Iran
Jump to navigation Jump to search

Stuxnet was developed by NSA and Unit 8200 to try to sabotage Iranian efforts to enrich uranium.

Fear of Iran joining the 'nuclear club' predates the 1979 Islamic revolution, when the pro-West Shah Mohammad Reza Pahlavi was negotiated with the US, France and West Germany and embarked on a nuclear-energy spending spree that led to the building of some 20 reactors.

Following the 1979 revolution, Israel pursued a 'Persian wedge' against its local Arab enemies and cultivated substantial but secret business with the Islamic Republic. The 'Persian Wedge' program came to nothing and, from the early 1990's when Israel's own posession of a clandestine nuclear arsenal was already well known and understood, concerted efforts by Tel Aviv to portray Iran as a new and existential threat began.

Alarm bells are already being sounded in Washington. In early 1992 a task force of the House Republican Research Committee claimed that there was a "98 percent certainty that Iran already had all (or virtually all) of the components required for two or three operational nuclear weapons."

Similar predictions received airtime, including one from then-CIA chief Robert Gates that Iran's nuclear program could be a "serious problem" in five years or less.

Iran was putting the pieces of its strategic puzzle together. A US spy satellite detected the launch of an Iranian medium-range missile, sparking speculation about the danger posed to Israel.

In August 2002, the Iranian opposition group Mojahedin-e Khalq (MEK, a.k.a. MKO) announced that Iran is building an underground uranium enrichment facility at Natanz, and a heavy water reactor at Arak. It is widely believed that the evidence had been passed to the MEK by Israeli intelligence.

Enrichment and reactors are not forbidden to Iran as a signatory of the Nuclear Non-Proliferation Treaty (NPT), but the failure to disclose the work prompts an IAEA investigation and much closer scrutiny. Iran insists its efforts are peaceful, but is found in breach of its IAEA safeguards agreement, and accused by the IAEA of a "pattern of concealment."

Despite reports and intelligence assessments to the contrary, Israeli and many US officials continue to assume that Iran is determined to have nuclear weapons as soon as possible. 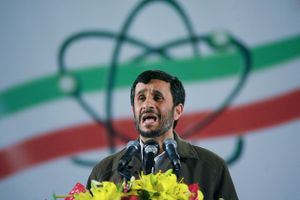