Not to be confused with the Syrian Civil Defense which is member of the International Civil Defence Organisation since 12. September 1972.

They were founded and trained in Turkey, and are not the ICDO-accredited Syrian civil defence organisation, although they have effectively usurped that title in their logo and PR activities. The White Helmets have been accused of sabotaging the efforts of that group, including by murdering their members.[2]

In November 2019, their founder James Le Mesurier was found dead in Istanbul 3 days after Russian press spokesperson, Maria Zakharova, tweeted that he was "a former agent of Britain's MI6". 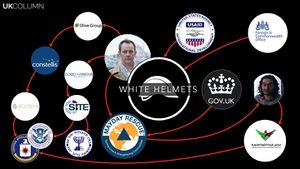 The White Helmets describe themselves as "2,900 volunteer search and rescue workers from local communities who risk their lives to save others and bring hope" throughout opposition-controlled Syria,[3] and claim to have "saved 60,000 lives" during the conflict.[4]. They are lauded by the Western commercially-controlled media as a group of volunteer first-responders, and are financed by the US, Britain, Qatar and Saudi Arabia to the tune of $100 million.[5]

Their official website says the volunteers have already saved more than 20,000 people on all sides of the conflict, adding that they are following the principles of humanity, solidarity and impartiality outlined by the International Civil Defence Organisation.

They were nominated for the 2016 Nobel Peace Prize[6], a nomination which The Guardian supported in October 2016.[7]

The prize was awarded to Colombian president Juan Manuel Santos on 7 October 2016.[8]

In a post to Facebook, she referred to them as "terrorists"[9] and in a Sputnik News article she said White Helmets and other NGOs such as the Syrian Observatory for Human Rights, are used to justify the West’s policy of arming and supporting the insurgency in Syria:

“If we at least start making people question this propaganda and if we make people appreciate that it is a very one sided story that is being portrayed to them, then we are breaking some strangle holds of these narratives.”[10] 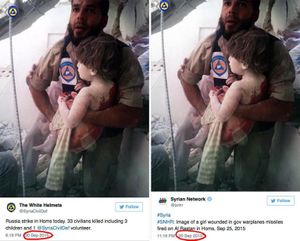 Vanessa Beeley published a 25-minute interview to support these claims at Youtube.[12] On 10 December 2017, she was interviewed by Afshin Rattansi on Going Underground:

"Over the past four years, the UK government has poured over £200 million of tax payer funds into a failed proxy military intervention and illegal shadow state-building project in Syria. This week, the penny finally dropped…"[13]

In January 2018, Eva Bartlett of The Indicter Magazine, who styles herself as the victim of a "Channel 4 News smear piece on myself" published a series she termed "the White Helmets whitewashing story".[11]

On 6 October 2016, RT's Peter Lavelle hosted an edition of Crosstalk which exposed the White Helmets as an elaborate and cynical Western PR stunt promoting illegal regime change in Syria.[14] Six months later, a video featuring the leader of Tahrir al-Sham (al-Qaeda in Syria), Abu Jaber, was making the rounds on social media, showing Jaber praising the White Helmets as the “hidden soldiers of the revolution”. The video begged the following question: “If the White Helmets are so unbiased, why does Tahrir al-Sham consider them to be heroes of the ‘revolution?’” The answer, of course, is simple: the White Helmets are nothing more than a propaganda wing of al-Qaeda itself, funded by Western governments and NGOs for the purpose of creating false narratives and shock videos designed to manipulate the Western public.[15] 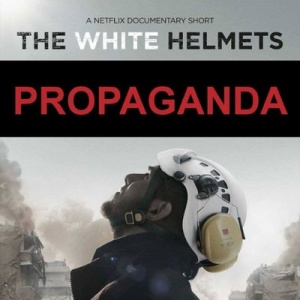 Vanessa Beeley writes that the "supposedly Syrian NGO White Helmets were established in Turkey, not in Syria. They are largely trained in Turkey and Jordan, not inside Syria. The group were established in March 2013 by a British ex-military officer with $300,000 in seed funding from Japan, the UK and the US."[16] James Le Mesurier, the officer concerned, is a private contractor whose company is based in Dubai.[17]

The current Chief of the SIS, Richard Moore, was British Ambassador to Turkey (January 2014 to December 2017) when the White Helmets were being formed.

USAIDs website suggested in 2015 that it had sent 18 million Dollar to the White Helmets:[18]

"Over $18 million in assistance to civil defense teams which act as emergency responders to everything from indiscriminate regime barrel bombings to winter storm relief to firefighting. To date, Syrian civil defense units have saved over 30,000 lives."

In 2021 De Volkskrant reported that the Dutch government suppressed financial fraud by the White Helmets.[19]

On 13 April 2018, Russia stated that Britain was behind the Douma chemical attack, intending it to serve as a justification for airstrikes on Syria — which were later launched. The idea was reportedly first floated by lower-ranking Russian officials, before being promoted by Russian Foreign Minister Sergei Lavrov.[20] 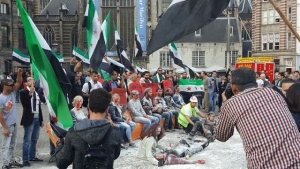 Staging a "Save Aleppo" protest in Europe

Protests held across North America and Europe [When?] staged by supporters of armed militants in Syria have staged scenes in Western streets eerily similar to those featured in the photos and videos of the US-European funded “Syrian Civil Defence” also known as the White Helmets. Posing as an impartial rescue force, the White Helmets are transparently auxiliaries serving exclusively side-by-side with armed militants including US State Department, UN, and EU designated foreign terrorist organisations. Their primary function is not “rescuing” anyone, but to manage a public relations campaign aimed at swaying public and political opinion, leveraging “humanitarian” sympathy worldwide. Their primary means of doing this is publishing photos and videos of their members – wearing elaborate, matching uniforms and driving brand new ambulances – pulling dust and blood covered victims from rubble allegedly brought down upon them by Syrian and Russian airstrikes.

The veracity of their photos, videos, and many claims have never been independently verified, and in many cases, evidence suggests that much of what they present to the public across their extensive, well-funded social media presence has been fabricated.[citation needed] The coordinated “Save Aleppo” protests held across Europe and North America,[When?] perhaps revealed just how transparently fabricated and fictional the White Helmets' work really is. During one protest, photos retweeted by the official White Helmets Twitter account showed actors dressed up as “war victims", covered in fake dust and blood, appearing almost indistinguishable from the alleged “victims” the White Helmets regularly “save” in Syria. The protest, staged in European streets far from the Syrian conflict, even included children – likewise covered in fake dust and blood – cradled in the arms of adults, posing with despondent looks upon their faces. Also part of the staged scene were actors dressed like the "White Helmets" themselves. 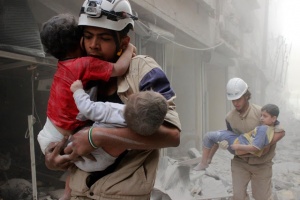 The only difference between admittedly staged scenes in European streets during a recent “Save Aleppo” protest, and the daily output of the Western created and funded White Helmets acting troupe in Syria is that in Syria, the devastation of war provides a much more convincing “set” for the actors to perform on.

While the acting troupe that organised this protest may have thought they were cleverly “bringing the conflict to the streets of Europe” to invoke global sympathy for their cause, what they really proved was just how easy it really is for the White Helmets to create “war victims” anytime, anywhere. In Syria, where years of US-backed violence has left many parts of the country devastated, such staged scenes playing out with the devastation of war as a backdrop become all the much more convincing. With White Helmets videos heavily edited before reaching the public, they are able to create tragic scenes of war, anytime, anywhere – even in the streets of Europe thousands of miles away from where Syrian and Russian warplanes are operating. Their primary goal and that of the special interests funding them tens of millions of dollars, is to manipulate the hearts and minds of the global public in support of Western-backed armed militants – not “save lives” nor bring peace to Syria.[21] 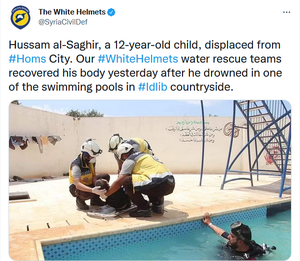 In July 2018, a number of White Helmets and their families were evacuated from Syria by Israeli Defence Forces, crossing from northern Israel into Jordan at three points. The Israelis had initially put the numbers evacuated at 800, but later the figure was revised downwards by James Le Mesurier, a former MI5 officer who founded the group in Turkey in 2013. He said that 422 people were rescued, including 98 White Helmets. As many as 800 others did not manage to escape or chose not to do so.

On 22 July 2018, the following petition was addressed to prime minister Theresa May: "Don't Grant Asylum to Al Qaeda Terrorists".[24]

On 30 July 2019, Twitter suspended the official account of the Russian Embassy in Syria (@RusEmbSyria) after they tweeted facts that exposed White Helmets and the terrorist organisation's manufacturing of propaganda.[25][26] On 31 July 2019, following an international outcry, the Embassy tweeted:

"Greetings from sunny #Damascus! We're back, intact and functioning normally! Thank you, friends, for your support! You did a great job to bring us back! Stay with us and encourage your friends to join, as further on in such surcumstances we'll need much stronger backup in #Syria."[27] 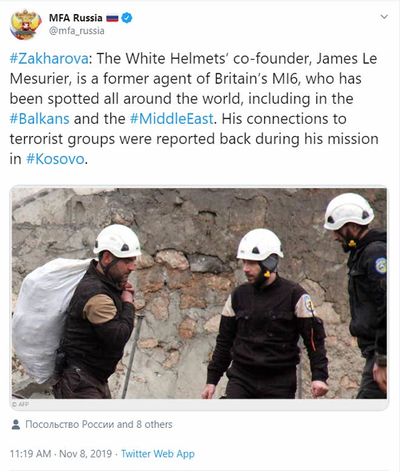 On 8 November 2019, Maria Zakharova, Press spokesperson for the Russian Federation accused the White Helmets' founder, James Le Mesurier, of being an MI6 agent with links to Al-Qaeda. He was found dead on 11 November [28]