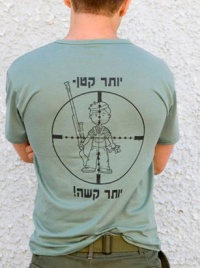 The smaller the harder, July 2007. Some Hebrew translates better than others. 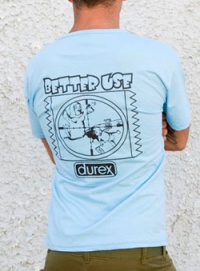 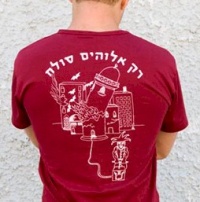 Demolish mosques and houses, actions vigorously denied by the IDF.

The Israel T-Shirt affair went unremarked for at least 3 years before becoming common knowledge and condemned world-wide in 2009.

The Israel Defence Forces responded urgently when the controversy hit the news in the aftermath of Operation Cast Lead in Gaza "The IDF intends to take action for the immediate eradication of this phenomenon."[1]

Some articles and pictures once available are now dead links.

In 2006, soldiers from the "Carmon Team" course for elite-unit marksmen printed a shirt with a drawing of a knife-wielding Palestinian in the crosshairs of a gun sight, and the slogan, "You've got to run fast, run fast, run fast, before it's all over." Below is a drawing of Arab women weeping over a grave and the words: "And afterward they cry, and afterward they cry." [The inscriptions are riffs on a popular song.]

Another sniper's shirt featured an Arab man in the crosshairs, and the announcement, "Everything is with the best of intentions."[2]

T-shirts of this nature are known to have been produced in 2006 and 2007[2] but only became news in 2009,[1] days after Israeli soldiers who had taken part in Operation Cast Lead in 2008-2009 criticized the rules of engagement that permitted killing of civilians and destruction of property.[3]

Some of the captions and images emphasize actions the army vigorously denies, such as coups de grace or deliberate attacks on women, children and religious sites.[4]

According to the Israeli daily newspaper Haaretz, IDF soldiers sometimes ordered T-shirts with offensive anti-Arab images to commemorate the end of their basic training or field duty.[2] Offensive designs have included a child carrying a gun in the crosshairs of a rifle with the message "The smaller, the harder."[5] According to a soldier interviewed by the newspaper, the message has a double meaning: "It's a kid, so you've got a little more of a problem, morally and also the target is smaller."[5]

Other designs show an infantry snipers' T-shirt with the writing "better use Durex" alongside the weeping mother of a dead Palestinian child and a teddy bear; another sniper course shirt showing an aim taken at a pregnant Palestinian woman with a bull's-eye superimposed on her belly and the slogan "One shot, two kills"; a T-shirt depicting a Palestinian baby becoming an angry youth and then an armed man, with the slogan "no matter how it starts, we'll end it"; a shirt from the Haruv battalion with the picture of a Samurai and the caption "we won't chill before we verify the kill" and many more.[4]

Other descriptions are of dead babies, mothers weeping on their children's graves, a gun aimed at a child, bombed mosques and the slogan "Let every Arab mother know that her son's fate is in my hands!" and a drawing depicting an Israeli soldier as the Angel of Death, next to a gun and an Arab town.[6]

The IDF Spokesman's Office responded: "Military regulations do not apply to civilian clothing, including shirts produced at the end of basic training and various courses. The designs are printed at the soldiers' private initiative, and on civilian shirts. The examples raised by Haaretz are not in keeping with the values of the IDF spirit, not representative of IDF life, and are in poor taste. Humor of this kind deserves every condemnation and excoriation. The IDF intends to take action for the immediate eradication of this phenomenon. To this end, it is emphasizing to commanding officers that it is appropriate, among other things, to take discretionary and disciplinary measures against those involved in acts of this sort."[2]

The manager of Adiv, a T-shirt print shop, says the company prints around 1,000 different patterns each month, with soldiers accounting for about half.

"There have been a few times when commanding officers called and said, 'How can you print things like that for soldiers? For example, with shirts that trashed the Arabs too much. I told them it's a private company, and I'm not interested in the content. I can print whatever I like. We're neutral. There have always been some more extreme and some less so. It's just that now more people are making shirts."[2]

This article was originally prepared for Wikipedia, where it is noted as "speedy deleted" to CSD G8 "Pages dependent on a non-existent or deleted page". This apparently inexplicable action is however linked to discussion of a second nomination for deletion of July 2009 and seems to be based on Wikipedia is NOT NEWS (one editor calls it "a comically unimportant affair". The first attempt at deletion in March 2009 failed.