Israel bonds are financial instruments marketed by the State of Israel through affiliated organizations. Most of the bonds are marketed in the United States. The principal peculiarity of the sales of bonds in the U.S. is that until recently it was prohibited for pension funds and other financial organizations (e.g., fund management companies) to invest in non-rated bonds. The reason for this is that there is no proper risk assessment if there is no rating, and thus fund managers or pension fund managers would violate their fiduciary duty by purchasing such bonds. However, in the U.S. the most notorious and corrupt unions invested a substantial portion of their members' pension funds in Israel bonds. Furthermore, incessant lobbying in the U.S. has changed the law in a few states where there were either pro-Israeli governors or State treasurers. New York, Connecticut, and (impending) California have relaxed the regulations about State pension funds holding Israel bonds. Israel bonds are not rated and thus not marketed through the principal financial markets — they are mostly privately placed. 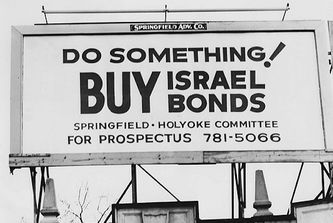 A second peculiarity of Israel bonds is their tax status or fiscal preferential treatment in US financial markets. Other countries would need to engage in extensive documentation, rating, and incur substantial placement costs; on the other hand, Israel is exempted from most of these requirements and receives a preferential tax handling.

Implications of the Israel bonds

Holding massive holdings of Israel bonds (in the tens of billion USD) in U.S. pension funds, by private individual holdings and fund portfolios (e.g., the Parnassus fund in the US boasts that it invests in Israel bonds) ties US policy and public pressure to one defending Israeli financial interests. On top of (1) massive economic and military aid (2) massive government to government loans and loan guarantees, (3) sale of subsidized military hardware, and (4) massive yearly debt-forgiveness, Israel also receives massive flows of private funds. The holders of these bonds will not be pleased if US policy becomes more assertive, and if for example, no more official debt is forgiven or no more loan guarantees are extended. Such a move would undermine the Israeli economy — which depends on US financial support. Thus the widespread ownership of Israel bonds further binds US policy to that of Israel.