Jürgen Wilhelm Möllemann was a German politician of the Free Democratic Party. He was the minister of State at the Foreign Office (1982–1987), and as the minister of Education and Research (1987–1991). He was Minister of Economics (1991–1993) and vice-chancellor of Germany (1992–1993) in the government of Chancellor Helmut Kohl.

He left the cabinet in 1993 after facing criticism for using an official letterhead for advertising a relative's business idea (the so-called Briefbogen-Affäre).

In the 2002 national election, he produced a flyer(leaflet) criticizing Ariel Sharon's actions against Palestinians and Michel Friedman's endorsement of those actions; the flyer was regarded as "antisemitic" by some, and the debate surrounding these events led to Möllemann leaving the FDP in March 2003 and resigning his position as NRW party leader; however, he kept his seat in the Bundestag without party affiliation, despite promises to resign from it.

Möllemann was president of the German-Arab Society from 1981 to 1991 and again in 1993 and 1995. In this capacity, he frequently commented about the conflict in the Middle East between Israel and the Palestinian Autonomous Territories.

In the spring of 2002, Möllemann sharply criticized Israel's actions toward the Palestinians and expressed understanding for suicide bombings, which he saw as a form of resistance against an occupation that violated international law. In doing so, he backed Jamal Karsli, who was then a member of Bündnis 90/Die Grünen. Karsli had spoken of a "war of extermination" by Israeli Prime Minister Ariel Sharon against the Palestinians, of "Nazi methods" by Israel, and of a "Zionist lobby" in Germany that prevented critical discussion of Israel's policies. After the federal executive committee of the Green Party distanced itself from these statements, Karsli resigned from the party. He was admitted to the FDP parliamentary group in North Rhine-Westphalia on Möllemann's initiative.

This was protested by the Central Council of Jews in Germany (ZdJ) and some prominent FDP members such as Hildegard Hamm-Brücher, who tended to judge Karsli's choice of words as anti-Semitic. Möllemann reacted to corresponding criticism from Michel Friedman, then vice president of the ZdJ, as follows on May 16, 2002 in heute journal:

ZdJ President Paul Spiegel then accused Möllemann of confirming "centuries-old anti-Semitic clichés," namely "the view of anti-Semites that Jews, by their very existence or utterances, are themselves responsible for anti-Semitism." Chancellor Gerhard Schröder called on the FDP to distance itself from Möllemann's attacks against the Israeli government. Other SPD and Green politicians also criticized Möllemann's statements. On May 31, in a Berlin statement, the FDP federal executive regretted "that statements by Jürgen W. Möllemann have given rise to misunderstandings," and rejected "accusations of anti-Semitism against the FDP as a whole or against individual leading members of the FDP" as "defamatory and unjustified." After further accusations of anti-Semitism against Karsli, Guido Westerwelle, the federal chairman of the FDP, ultimatively demanded that Möllemann terminate Karsli's membership in the FDP parliamentary group.

On June 6, 2002, Möllemann announced Karsli's resignation from the FDP parliamentary group in the Düsseldorf state parliament, stating, "If I have offended the sensibilities of Jewish people, I would like to apologize." Westerwelle then demonstratively showed solidarity with Möllemann. Shortly thereafter, however, the latter explicitly excluded Friedman from his apology.

On September 17, 2002, five days before the upcoming Bundestag elections, Möllemann had a leaflet printed in an edition of over eight million copies and distributed to all households in North Rhine-Westphalia without consulting the party executive committee. Under the headline "Klartext," it depicted Ariel Sharon and Michel Friedman with portrait photos and attacked them in the accompanying text. This action by Möllemann and the statements in the leaflet were rejected by members of all parties represented in the Bundestag. Most of the FDP state associations also distanced themselves from his leaflet, stressing that this was not official party promotional material.

According to social scientists Samuel Salzborn and Marc Schwietring, the debate triggered by Möllemann "openly articulated, strategically used, trivialized, ignored, and thus normalized [...] anti-Semitism as part of public politics in Germany's social center." Moreover, anti-Semitic thought was given a "discursive capacity that operated beyond civilizing motives." Möllemann himself referred to 35,000 approving reactions. In a Forsa poll conducted at the height of the debate at the time, 35 percent of respondents agreed with Möllemann's statement that Friedman was reinforcing anti-Semitism through his appearance and behavior; only 24 percent thought Möllemann was reinforcing it. The number of anti-Semitic crimes rose from 127 in the first quarter of 2002 to 319 in the second quarter. Wolfgang Thierse (SPD), then president of the Bundestag, also linked this jump to the anti-Semitism debate surrounding Möllemann and expressed doubts that this was just a coincidence. 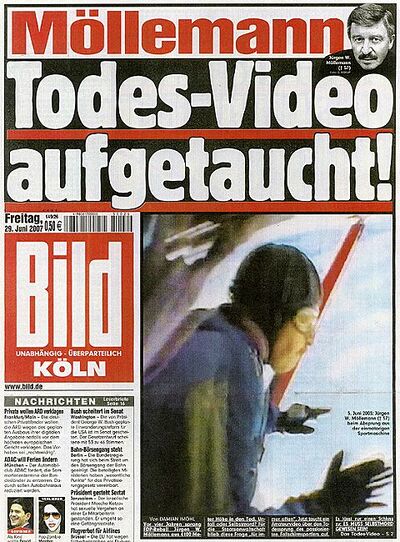 Bild reporting on the video that shows him on his last plane ride.[1][2]

Möllemann, who was a experienced skydiver, died on 5 June 2003 in a parachuting incident at Marl-Loemühle. His death was investigated by the Essen district attorney's office, which published a final report on 9 July 2003. While outside interference was ruled out, no definite verdict was reached on whether Möllemann committed suicide or had an accident.

Shortly before his death, Möllemann had been confronted with allegations he had been involved in illegal arms deals and evaded taxes on millions of euros he allegedly earned from those activities. To enable a full investigation on these charges, the Bundestag lifted his parliamentary immunity on 5 June 2003 at 12:28, 22 minutes before his death.

The tax evasion charges were dropped after his death, media reports linking Möllemann's company WebTec with arms deals in the Arab world were classified as rumors by the then head of the North Rhine-Westphalia State Criminal Police Office.

Möllemann had given his party colleague Wolfgang Kubicki a letter in April 2003, which Kubicki was only supposed to open in case "something happened" to him. According to Kubicki, the letter did not contain any information about the motives for the death jump.

This page imported content from Wikipedia on 02.02.2022.
Wikipedia is not affiliated with Wikispooks.   Original page source here