James Alan Abrahamson is a retired U.S. Air Force general who served Associate Director of NASA and former director of President Ronald Reagan's Strategic Defense Initiative from 1984 until 1989. He later served as chairman of the board of GeoEye, a company he helped to transform into the world's largest space imaging corporation. Previously, he served as chairman of Oracle Corporation's board of directors from 1992 until 1995.

Abrahamson directed Stratesec[1] a security comany which had unparalleled access to the World Trade Center in New York prior to 2001. He was a member of the deep state intelligence coordinating conference Le Cercle.

Abrahamson was born in Williston, North Dakota, on May 19, 1933. He earned a Bachelor of Science degree in Aeronautical Engineering from the Massachusetts Institute of Technology in 1955 and a Master of Science degree in the same field from the University of Oklahoma in 1961. He completed Squadron Officer School in 1958, Air Command and Staff College in 1966, and the Industrial College of the Armed Forces in 1973.

He was commissioned as a second lieutenant through the Air Force Reserve Officer Training Corps program in November 1955 and completed pilot training at Laughlin Air Force Base, Texas, in May 1957. His initial operational assignments included flight instruction, flight test and aircraft maintenance positions with Air Training Command.

In August 1961, Abrahamson was assigned as spacecraft project officer on the VELA Nuclear Detection Satellite Program at Los Angeles Air Force Station, California. From October 1964 to August 1965, while assigned to the 428th Tactical Fighter Squadron, Cannon Air Force Base, New Mexico, he served two temporary tours of duty in the Vietnam War, where he flew 49 combat missions.

He graduated from Air Command and Staff College as a distinguished graduate in July 1966. He then attended the Aerospace Research Pilot School at Edwards Air Force Base, California, and, upon graduation, served as an astronaut with the Air Force's Manned Orbiting Laboratory Program from August 1967 until the program was canceled in June 1969. Abrahamson never flew in space, and therefore does not wear astronaut wings.

Abrahamson then served on the staff of the National Aeronautics and Space Council in the Executive Office of the President of the United States. In March 1971 he became manager of the TV-guided, air-to-ground Maverick missile program at Headquarters Aeronautical Systems Division, Wright-Patterson Air Force Base, Ohio. In June 1973, he assumed command of the 4950th Test Wing there.

In November 1981, he was assigned as associate administrator for the Space Shuttle Program, National Aeronautics and Space Administration (NASA) Headquarters, Washington, D.C. During his tenure, the Shuttle achieved 10 developmental and early operational launches, and demonstrated its operational capabilities by achieving the first satellite retrieval and repair mission.[2] 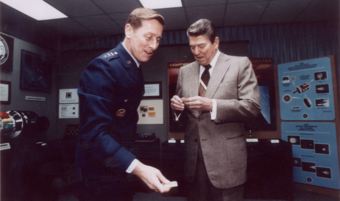 Abrahamson was appointed by President Ronald Reagan to be the first director of the Strategic Defense Initiative ("SDI") in April 1984. The "Star Wars" program, as SDI's detractors dubbed it, was initiated to develop a sophisticated anti-ballistic missile system that would prevent missile attacks from other countries, particularly the Soviet Union. Some countries opposed to U.S. missile defense efforts raised concerns about the program "contravening" the strategic defense systems portion of the Strategic Arms Limitation Talks Agreement (SALT I) in the years before the program was enacted.

Ultimately, concerns about the objectives of SDI and fiscal budgetary constraints forced the Reagan administration to announce the program would cease.

Abrahamson was promoted to lieutenant general on July 21, 1982. He retired from the U.S. Air Force on March 1, 1989, and entered the private sector of the military-industrial-complex and informal intelligence circuits.